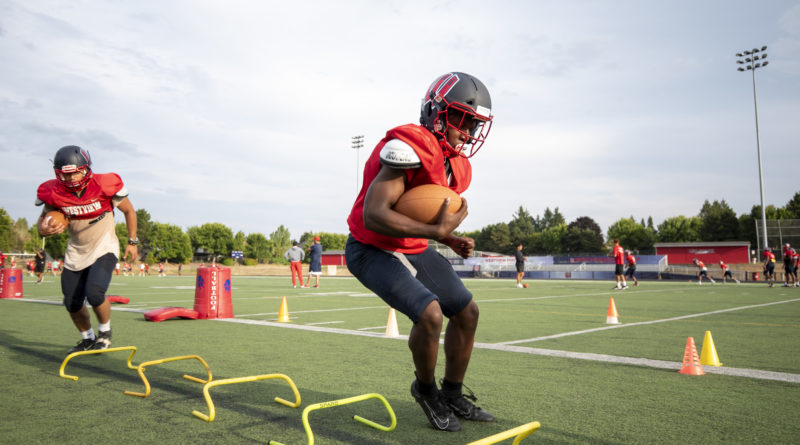 SBLive Oregon will break down every 6A, 5A and 4A team in the state leading up to the 2021 fall football season. Here’s our look at the Westview Wildcats of the Class 6A Metro League.

Clemons has steadily climbed the recruiting rankings this summer. He’s a consensus four-star recruit who now sits No. 1 among statewide prospects on 247Sports’ and ESPN’s lists and ranks No. 12 nationally among receivers by Rivals. He recently announced his top three college choices: Auburn, Oregon and Penn State. He returns to the Wildcats after playing last fall at Pleasant Grove High School in Utah, where he caught 37 passes for 760 yards and nine touchdowns. “He’s a receiver who can stretch the field and has great hands,” Atkinson said.

Another of Westview’s top players who went to Pleasant Grove last fall after the OSAA postponed the season, Jones boosted his stock with a solid season with the Vikings, showing off his versatility by finishing second on the team in rushing (209 yards on 52 carries) and receiving (24 catches for 251 yards). He has drawn interest from BYU, Air Force and Colorado State, among others, and is No. 11 in the 247Sports statewide recruiting rankings. “He’s an athlete who is great in space and plays both sides of the ball,” Atkinson said.

The third member of the Pleasant Grove trio to return to Westview, Leavitt recently received an offer from Florida State after a solid sophomore season in which he earned the starting job with the Vikings and threw for 1,672 yards and 17 touchdowns (eight interceptions), completing 52.6 percent of his passes. “He has a great arm and high IQ, with the ability to read defenses,” Atkinson said.

Bennett had a big season for the Wildcats as a junior, catching 22 passes for 400 yards and three touchdowns and recording 19 tackles and three interceptions in the secondary. He recently received an offer from the University of Idaho. “He’s a playmaker at safety, a ballhawk,” Atkinson said.

Huppin started two games for the Wildcats as a sophomore, catching three passes and making four tackles and an interception as he flashed the potential that has intrigued several Pac-12 schools. “He has great hips and speed as a cover corner,” Atkinson said.

With Jones in Utah, Lesowski got a chance to show his stuff as lead back, and he delivered with a team-high 207 yards and two touchdowns on 48 carries. He also should be a cornerstone on defense at outside linebacker after making 18 tackles (two for loss) in the spring.

Fisher split backfield duties with Lesowski as a sophomore and finished with 44 carries for 111 yards and a touchdown. “He has great vision and burst,” Atkinson said.

Sager’s sophomore season ended with him moving up to the varsity squad for the final two games, making seven tackles (two for loss) and announcing himself as a leader of both lines this fall. “He plays with a high motor and is a physical player,” Atkinson said.

Collyer was a revelation for the Wildcats in the spring, leading the team with 38 tackles and an interception.

On paper, Westview has the potential to contend for its first Metro League title since 2007 and get past the first round of the 6A playoffs for the first time since 2016, its last winning season.

The Wildcats have won two games in each of the four seasons since that 2016 run, but that could soon change thanks to a talent pipeline that has produced two of the state’s top dozen class of 2022 recruits (Clemons and Jones) and a quarterback (Leavitt) who ranks among the nation’s top class of 2023 recruits.

That trio returns battle-tested after playing for a team that reached the second round of the Utah Class 6A playoffs last fall. They join a group that knocked off a Jefferson team led by Oregon State-bound running back Damir Collins in Week 4 and narrowly lost to Beaverton in its season finale.

“That team was special,” Atkinson said. “They faced a lot of adversity and played for each other and bought into each other.”

While the Wildcats have one of the best QB-RB-WR combos in the state, how they shape up along the line will tell the tale of their season. Sager figures to anchor the group, but players such as senior Bryce Cordell (6-3, 300) and junior Jackson Sager (6-2, 290) need to step into starting roles and give Westview’s skill players time to shine.

“We will find out a lot about our line in camp when we get the pads on,” Atkinson said.

Lesowski, Collyer and senior safety Anthony Lowe, who transferred from David Douglas last year and had seven tackles in his first varsity game, will lead a defense that made strides in the final two weeks of the spring season. The Wildcats will need to continue that upward trend to make a move up the standings in the ever-difficult Metro League.

“We are focusing on the process of preparation and focusing on one day at a time. Our only goal right now is to compete in every practice and do everything we can control to prepare for Week 1.” — Ryan Atkinson