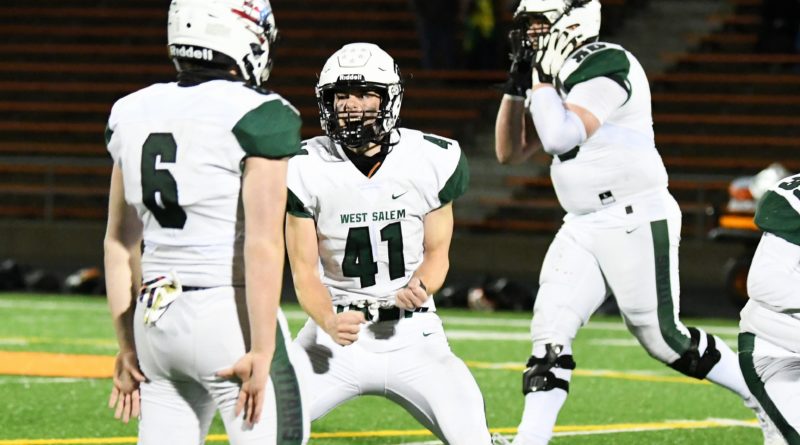 SBLive Oregon will break down every 6A, 5A and 4A team in the state leading up to the 2021 fall football season. Here’s our look at the West Salem Titans of the Class 6A Mountain Valley Conference.

Dodsen-Greene was hurt all of last season, but the senior is back and ready to roll. Stanley said the 6-foot-1 athlete is one of the best receivers he’s coached in his 17 years at West Salem. “He is an extremely hard worker who is driven to succeed,” Stanley added. “His work ethic is a great example for the other guys on our team.”

Watson is a returning starter who will be the leader of the Titans’ offensive line from the guard position. “Aydan went from a potential player to an all-conference-type performer for us last year,” Stanley said.

Son of Western Oregon University head coach Arne Ferguson, Brooks Ferguson is a 6-foot-6 senior with tremendous potential. “He has the most physical tools of any quarterback we have ever had, and we have had some pretty good ones,” Stanley said. “We are really excited for his senior year.”

Giertych started at safety as a junior and was the backup running back behind standout Nate Garcia. “He has been waiting for his chance at running back,” Stanley said. “Hudson has all the tools to be an all-conference player.”

Aliifua is a versatile senior who projects to be an impact player on both sides of the ball. “Judah is another player who has waited his turn and worked hard to prepare,” Stanley said. “He is a smart football player and is our Swiss army knife that we can play just about anywhere.”

A returning starter, Dunton is a talented lineman who will play a ton of snaps on both sides of the ball. “Jaiden is one of my favorite all-time guys that I have coached,” Stanley said.

The Titans rode a strong senior class to a 6-0 record in the spring, a fitting end for a talented group that included star players Holden Whipple (Northern Arizona), Jackson Lowery (Linfield) and Garcia.

West Salem won’t have the same firepower this season, but Stanley isn’t concerned about the program taking a step back.

“We will not have the depth of talent that we had last year, but we have plenty of talent to be successful.”

Much of the talent is relatively unproven at the varsity level. Ferguson could be one of the top quarterbacks in the state, but he sat behind Lowery in the spring. Dodsen-Greene transferred to West Salem after his sophomore year at Sprague but missed the spring season because of injury. The Titans also will be young at several spots on the line.

“Inexperience across all groups will be our weakness, so we may have some ups and downs early on as we learn to play at a Friday night level,” Stanley said.

Despite the lack of proven varsity players, West Salem should remain near the top of the Mountain Valley standings. The Titans haven’t dropped more than one conference game in a season since 2015, and there’s no reason to believe the streak will end this fall.

“Our goals every year center around being great people and developing them into men of character,” Stanley said. “We will keep working toward those goals, and when we do accomplish them, everything else falls into place.”

“COVID has been a challenge in some respects, like getting guys off the couch and into the weight room. But for the most part, we have the same crew coming back and continuing to develop.” — Shawn Stanley