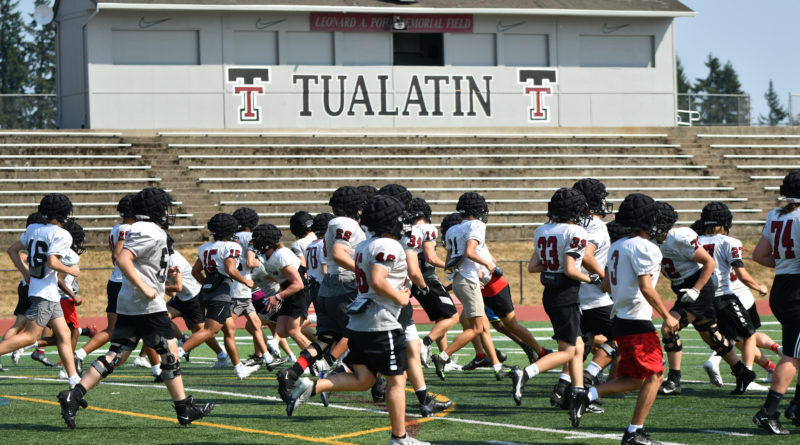 SBLive Oregon will break down every 6A, 5A and 4A team in the state leading up to the 2021 fall football season. Here’s our look at the Tualatin Timberwolves of the Class 6A Three Rivers League.

Prusia might have been Oregon’s breakthrough star of the 2021 spring season. He went from a little-known honorable mention defensive back as a sophomore to the state’s Gatorade Player of the Year and the Three Rivers League offensive player of the year as a junior. He caught 34 passes for 524 yards and nine touchdowns and vaulted to No. 5 on 247Sports’ statewide recruiting list (No. 6 on ESPN). “He’s a big-time playmaker that can take the top off the defense,” Lever said.

Jones took over in the spring after serving as Blake Jackson’s understudy as a sophomore. Like Prusia, he has seen his profile blow up over the past several months. The first-team all-TRL quarterback completed more than 59 percent of his passes (93 of 157) for 1,348 yards and 16 touchdowns (four interceptions), then completed a strong body of offseason work with a stellar performance at the Northwest 9 Showcase in Yakima. “He did a great job in the six-game season,” Lever said. “He has a cannon for an arm.”

Ross is an electrifying talent who makes plays in all three phases of the game, earning first-team all-TRL honors on offense (406 yards and five TDs on 27 carries) and as a kick returner (23.3 yards per kickoff return, 11.3 per punt return) and garnering second-team recognition on defense. “Hold your breath when he touches the ball,” Lever said. “He has the ability to make teams pay on both sides of the ball as well as in the return game.”

Burke is another tall, lanky receiver who last season finished second on the team in receiving with 17 catches for 288 yards and three touchdowns, earning all-TRL honorable mention. “He has some of the best hands in the state,” Lever said. “He’s a great route runner that will be a huge red zone target.”

Hale also made the all-TRL honorable mention list at receiver, finishing with eight catches for 140 yards and a touchdown. “A big target with the ability to make the tough catch,” Lever said.

Edwards is coming off a knee injury but is expected to make an even bigger impact this fall after receiving all-TRL honorable mention as a junior.

Biedritzky, an all-TRL honorable mention selection on offense, is a big target with soft hands who can run the seam. He also will help anchor a veteran defensive front.

Clanton, who also is returning from a knee injury, earned all-TRL honorable mention at inside linebacker in the spring. Lever called him “a vocal leader who will be a factor for us on the defensive side of the ball.”

An impact player on the outside, Harris was a first-team all-TRL selection as a junior. “A savvy player who can play bigger than he is,” Lever said.

Webb moved from center, where he was an honorable mention all-TRL selection as a sophomore, to guard, where he dominated inside and made the all-TRL first team. He added honorable mention on defense, and Lever expects him to be a major factor on both sides of the ball.

Expect Ogoli to break through in his first full season of football after making the all-TRL honorable mention list as a part-time player in the spring. Lever described him as “a lockdown corner with big play potential.” He also will get time at receiver to take advantage of his speed — he finished second in the 400 meters and third in the 200 at the TRL district track meet.

As a sophomore, Wagner received all-league honorable mention at safety and punter, where he averaged 31.7 yards per kick. After an impressive offseason, he’ll also get snaps on offense this fall.

Anderson had a stellar debut season with the Timberwolves, making the all-TRL second team. He’s ranked the No. 4 recruit in the state for the class of 2023 by 247Sports. “He has long arms and is very physical coming off the edge,” Lever said.

Biggs did a little of everything in the spring, getting a handful of carries in the backfield and catching 10 passes (third-most on the team). Lever said Biggs, also a standout baseball player, should play a major role on both sides of the ball.

Griffith shined on the JV squad in the spring. He played in one varsity game at the end of the season. He won’t be held down this fall. “He will be a great addition to our backfield,” Lever said. “He’s a power back and gets tough yards when needed.”

The Timberwolves are one of the few teams to make extensive use of a fullback in their base offense. Horner steps into the lead blocker role previously held by two-time all-TRL selection Casey Raz.

Even with all the talent stacked ahead of Michael on the depth chart, Lever said he will find ways to get Michael the ball this season. “He will help us in a variety of ways,” Lever said.

It’s been 11 years since Tualatin made a 6A state final, and while Lever wasn’t present for that championship game run, longtime defensive coordinator Erik Moen was part of that group, and he sees some similarities between that team and this one.

“Much like last year, our 2009 team had a small senior class but returned a talented junior and sophomore class,” Moen said. “The 2010 team, however, had several players who made significant improvements between their junior and senior year, essentially coming out of nowhere. This year’s team has far more returning starters and key contributors compared to 2010.”

That might be a massive understatement, as the Timberwolves return 13 players who received all-league recognition in the spring, including three of the top class of 2022 prospects in the state in Jones, Ross and Prusia, making them one of the preseason favorites to hoist the blue trophy Dec. 4. The offensive staff has spent all summer cooking up plans for how to best make use of their talents, while also finding ways to take advantage of the plethora of other skill position players Tualatin has at its disposal.

With all that talent, however, comes the challenge of giving it time to expose defenses. That responsibility will fall on an inexperienced line led by Webb, a two-time all-TRL selection who has settled into one of the guard positions. Newcomers to the starting lineup such as seniors Jake Helton (5-11, 250) and CJ Hazelett (6-2, 275) will be called upon to become leaders on the offensive and defensive fronts.

The secondary, led by Ross and Prusia, should be a strength of the defense, which has to replace a couple of all-league first-teamers up front in Curt Strahm and co-lineman of the year Junnie Belisle.

One thing Moen noted about that 2010 group was its team chemistry, which allowed Tualatin to bounce back from an average 2009 season to make its way to the state final.

He and Lever agree that whether the Timberwolves can repeat the 2010 team’s success — and perhaps take it one step further and win the program’s first state championship — will come down to how well they come together and battle through adversity. A Week 1 trip to Atherton, Calif., to take on a Menlo team that went 5-0 in California’s abbreviated spring season could provide that opportunity to bond as a unit.

“If this team exhibits the same attributes as the 2010 team, the sky’s the limit,” Moen said. “If they don’t, then they may not reach their potential.”

Lever was even more philosophical.

“The group that stands alone on the top of the mountain in the end will have to be willing to 100 percent buy in and commit to each other,” he mused. “I think this group can make that choice and the many tough choices that will face us along the way, but time will answer that question.”

“This is a talented group of kids. If we can come together as a team, love and trust each other, we are going to have a lot of fun this fall.” — Dan Lever