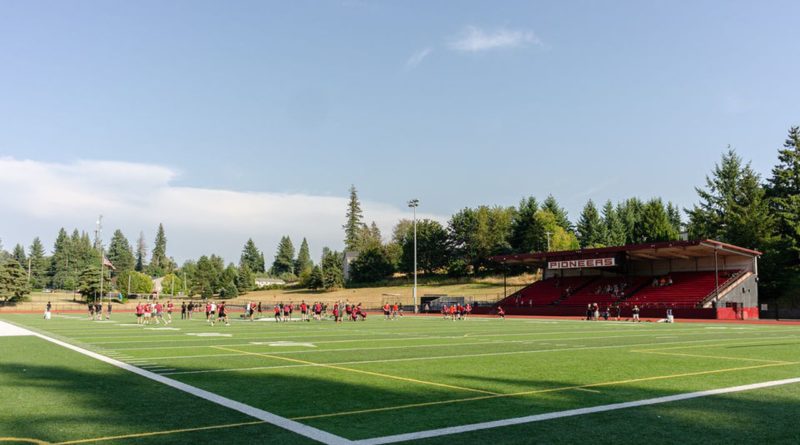 SBLive Oregon will break down every 6A, 5A and 4A team in the state leading up to the 2021 fall football season. Here’s our look at the Sandy Pioneers of the Class 6A Mt. Hood Conference.

In an already shortened junior season (because of the COVID-19 pandemic), Clemmer’s availability was truncated further by an injury. But what he showed in the two games he did get to play in the spring was tantalizing. He completed 26 of 47 passes (55 percent) with four touchdowns and no interceptions. “In that small amount of time, he really stepped up and was pretty special,” Dill said. “He throws the ball with great accuracy. He can drive the ball down the field.” Clemmer (6-feet-2, 175 pounds) also is a threat with his feet, said Dill, who added that Clemmer should be among the Mt. Hood Conference’s top quarterbacks.

Dill calls Turin the team’s biggest threat on offense. “He’s fast and has great ball skills,” Dill said. “He’s just a tremendous worker and has really worked himself into being a fantastic football player.” Dill said Turin makes an impact that might be unexpected given his dimensions (5-10, 165 pounds). “He plays physical for his size,” Dill said. “He has made big jumps in the offseason because nobody outworks him. I expect big things from him.”

Dill called the 6-1, 215-pound Lucore “by far” the Pioneers’ most physical player. “He will lead the team in tackles, and he’ll lead the team in (pancake blocks),” Dill said. “He’s nasty — in a good way.” Lucore competed in track (200 meters) for what Dill said was the first time, and the payoff in football will be better speed. “We’ve seen the benefit from that,” Dill said. Lucore will get some time at nose guard, and he will be counted on as a receiver from his tight end position.

Thompson started three of last season’s four games at outside linebacker and this season will be moved back to free safety. “He’s had a really good offseason,” Dill said. “He’s gotten a lot faster, a lot more physical. He’s showing that he can be a physical presence on both sides of the ball.” Sandy’s offense features a tight end at all times, and the 6-3, 185-pound Thompson will make an inviting target in the passing game. “He’s a playmaker when the ball’s in the air,” Dill said. “He’s a guy who’s a big threat, an athletic body who can go up and get the ball.”

Burns (6-2, 210 pounds) will be the nucleus of the line on both sides of the ball after he started every game last season at guard and defensive end. “We pull our guards quite a bit,” Dill said, “and he’s a fantastic pulling guard.” Burns also makes an impact on defense, including with his pass rush.

Rotzien made the varsity roster in the spring as a 6-foot freshman pushing 200 pounds. He was selected to play in the Oregon All-State Game, a fundraising event featuring freshmen and sophomores, and was selected as defensive player of the game.

Sandy played the spring season with five seniors. That means a lot of players with varsity experience are back.

“I think they’re motivated to show what they can do now, and (motivated) for us to make a run at the playoffs,” Dill said. “I think that’s the goal.”

Foremost among those returning varsity players are team captains Clemmer, Turin and Lucore.

“It doesn’t always happen this way,” Dill said, “but my best players are my captains. They lead by example. They’ve really stepped up. That makes it really fun, because they’re leading, and they can play. They can back it up.”

In a 2020-21 season already thrown off its axis by the COVID-19 pandemic, Sandy’s spring campaign might have been an outlier. Two of the Pioneers’ six scheduled games were canceled owing to the virus, and among the four opponents they did play were Sunset (6-0), Central Catholic (5-1 — the loss coming to Sunset) and Clackamas (a deceptive 3-3).

“We played a couple of top-five teams and a top-10 team,” Dill said. “It was absolutely a murderer’s row.”

The hope in the foothills of Mount Hood is that having endured the spring season, Sandy will be hardened as it mounts a playoff push this fall. Given that three of last season’s five seniors played on the offensive and defensive lines, it’s no secret what the key position group is for the coming season.

“I have more positional battles than I’ve had in the past,” Dill said, “but I have unproven guys up front. I think their ability to step up and their ability to show they can be physical, nasty O-line, D-line guys — that’s really going to determine the success.”

“They’re great kids who work hard. I’ve got great senior leadership, probably the best that I’ve ever had as a head football coach. And that really excites me about this season.” — Josh Dill