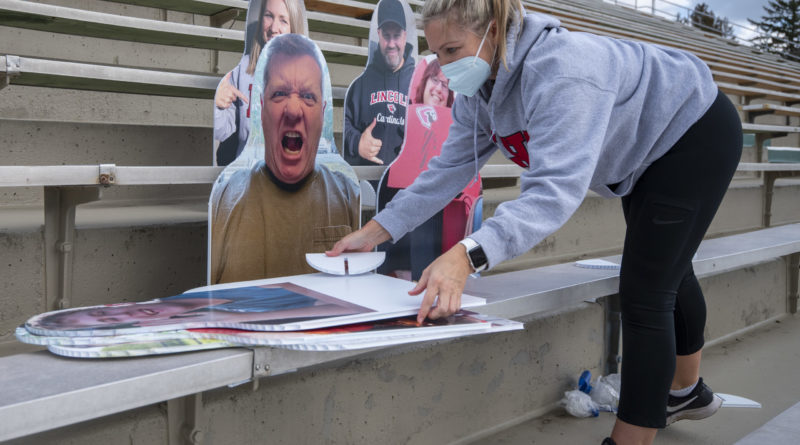 SBLive Oregon will break down every 6A, 5A and 4A team in the state leading up to the 2021 fall football season. Here’s our look at the Lincoln Cardinals of the Class 6A Portland Interscholastic League.

Kopetz has one FCS offer and is expecting more from Division I schools, Caruso said. Kopetz tied for the team lead in tackles for loss last season, and Caruso expects great things on defense from Kopetz in his senior season. “What makes this kid stand out to me isn’t his raw athletic ability,” Caruso said. “It’s that he’s a great kid. He’s a natural leader. He’s program-first. He’s the least selfish kid that I’ve been around in the program so far. … Makes it really easy to sell for recruiting.” Kopetz led the Cardinals of Southwest Portland in rushing (82 carries, 578 yards, seven touchdowns) in his junior season.

Wacker was the varsity backup last season and threw a handful of passes. From what Caruso has seen of Wacker, the coach is confident in putting his pistol-formation offense in the hands of the 6-foot, 180-pound junior. “With what he’s done in the offseason, both physically and mentally, he’s grown a ton,” Caruso said. “His ceiling is really high, especially with the offense we’re going to be coming in with. It gives us the opportunity for a prolific passing game.”

The team leader in tackles last season, Togni plays bigger than his listed 5-8, 166-pound dimensions. “He’s a hard-nosed kid, plays behind his pads, just relentless,” Caruso said, adding that Togni has quick feet and is getting quicker with his eyes and his decision-making. “He’s getting to that point where his technique and his eyes are going to make up for a lot of what he lacks in size.”

As a sophomore, Mirarabshahi tied for second in Class 6A in sacks (six) and tackles for loss (nine). “Quiet kid, loud playmaking ability,” Caruso said.

Smith and Prince both play at guard and defensive tackle. Caruso said they are great friends off the field and work together well on it. “They’re workhorses,” Caruso said. “They’re big, they’re strong, they have great technique. They’ve been working on their craft during the offseason” by attending camps and getting extra coaching. Caruso said lateral movement is among Smith’s strengths, which will be valuable as the team’s new offense uses pulling guards. Caruso said Prince can wreak havoc once he gets past the first line of defenders. “If you don’t get a hand on him and he gets to the second level, you’re going to have some scared linebackers,” Caruso said. “He loves getting second-level blocks. He knows how to finish them. He has good foot pattern, keeps his pads low.”

If opponents think they can run from Kopetz by trying to attack the other side, Caruso said, they’ll have another thing coming. The Cardinals will rely on the 6-1, 205-pound Joshi for big contributions on the side opposite to Kopetz. “He’s grown and gotten a lot stronger,” Caruso said. On offense, Joshi’s versatility and skill will be put to use, as a blocking tight end when he is attached to the formation and as a pass catcher when he’s split wide. “He runs good routes, has good hands,” Caruso said. “He’ll be a dual threat on offense.”

Lincoln was among the participants in Oregon high school football’s summer of sudden coaching changes. After three-year coach Jeremy Johnson left to take the Newberg head coaching job, Matt Caruso’s hire wasn’t complete until mid-July. His meet-and-greet with players and parents was the Thursday before the moratorium week.

Caruso, who has familiarity with Lincoln from his time as an assistant on the staff of Wes Warren (Johnson’s predecessor), says the environment around the school is a huge asset.

One concession to the short indoctrination period is that Caruso is holding off on implementing his complete offensive system. He knew he wanted a new defense, and he didn’t want to install a new offense on the hurry-up as well in the same preseason camp.

Caruso said Lincoln will modify what it did in Johnson’s offense — a lot of horizontal stretching of the field — using some of the same blocking schemes but operating from a pistol formation. Caruso expects his scheme to entail more ability for quick passes and, in the future, some run-pass option components.

“We’re taking some principles of what the line has been doing the last three years under Jeremy,” he said, “and we’re modifying it to make it more successful for the skill positions and not modifying it up front, where our strength is.”

The Cardinals anticipate having Justius Lowe, a 6-1, 185-pound receiver who has received FCS offers, among the skill position players.

Lincoln was 5-1 last season with a roster that included five seniors. This season’s team has 17 seniors — many of whom have considerable varsity experience.

Those five wins, though, came against teams with a combined record of 8-18. Regardless, Caruso thinks the Cardinals can contend for the 2021 city championship and, in a best-case scenario — staying healthy, continuing development of the players — reach the second round (or beyond) in the OSAA Class 6A playoffs.

“With the players that we have, the system that we have, how fast they’re already picking it up, what it already looks like … we shouldn’t expect anything less from Lincoln football,” he said.

The first-year coach also stressed the less quantifiable, more program-related goals: all of the seniors graduating, all of the eligible players returning for another season, and everyone getting something out of the season — at all levels of competition.

He said he wants to engender a familylike environment, and he credits his predecessor for getting things going on that track.

“It was a big help to me that the community already bought in to that mindset and that type of culture,” he said. “Jeremy did a whole lot for the Lincoln football community to help foster that.”

Caruso added: “I plan on being here for a long time. I want to make sure that (every player in the youth program), or a five-star recruit who has a dozen D-I offers, they all feel they’re respected the same way. Because they’re family.”

“The strength of the offense and defense is what we’re going to be able to do in the trenches.” — Matt Caruso