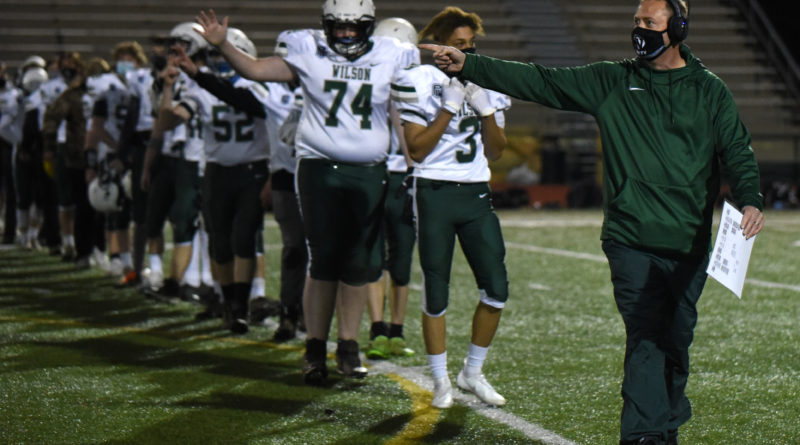 SBLive Oregon will break down every 6A, 5A and 4A team in the state leading up to the 2021 fall football season. Here’s our look at the Wells Guardians of the Class 6A Portland Interscholastic League.

White is among the Guardians’ leading returning tacklers and brings rare mental strengths to the team. “He’s basically a coach-level player on the field,” Bennett said. “His mental game is amazing.” If White doesn’t start at quarterback, he will be used at tight end and/or running back.

Nias graded out as the team’s top offensive lineman in the spring season. He’s 6-feet-2 and 260 pounds. “He’s very, very nimble and very, very quick,” Bennett said, “and he has enough size to dominate when he needs to.” Nias’ strength is pass blocking, Bennett said, and “he’s definitely the guy we’ll run behind when we need to gain a yard.”

A converted tight end, Litwin (5-8, 155 pounds) stands out for his leadership, intelligence and coachability. “He’s a very, very intelligent kid,” Bennett said, “and he loves the game of football.” Bennett said Litwin converts his ability to process information into an edge on the field. “He gets better as the game goes along, because he learns as he goes,” Bennett said. “He’s extremely coachable, and that’s probably his leading attribute.”

Bennett describes Peterson as very strong, very fast and very quick. “He loves to play football,” Bennett said. “He loves the program.” Peterson has developed into one of the program’s leaders — not just by example, Bennett said, but with positive words and actions that buoy those around him.

The school in Southwest Portland formerly named for the 28th president of the United States has been renamed for Ida B. Wells, a reporter who received a posthumous Pulitzer Prize in 2020 for “outstanding and courageous reporting on the horrific and vicious violence against African Americans during the era of lynching.” The school’s nickname has been changed from the Trojans to the Guardians.

The name change has its effects on the football program. The logo on the field was due to be altered in August, after practice had started. The team needed new uniforms — more uniforms, in fact, than initially expected, as turnout from the spring season has increased.

Second-year coach Keith Bennett said the team had about 35 players in the spring. As the early-August conditioning week ended, he said the program had 50 players and expected to get that number to 60.

At younger levels, Bennett has revived a youth program. About 125 players in grades kindergarten through eight have registered to play — a year after there was no youth program.

In Bennett’s mind, a coaching staff is “doing something right” when the number of students who want to be part of the program is on the increase.

“Success is measured by participation as opposed to wins and losses,” he said.

Taking over after an 0-9 season, Bennett’s first season ended with a 2-3 record. The wins were over fellow Portland Interscholastic League teams Madison (which finished 1-5) and Cleveland (0-5). Among the biggest personnel losses from last season was wide receiver/defensive back Jayden Brannan, who is now with Portland State. His ability — including his big-play ability — probably won’t be replaced this season.

“Our only goal,” Bennett said, “is we just want to get better today than we were yesterday.”

The progress Wells is making in building a foundation seems clear with the heightened interest in football. As for outcome-related goals, exceeding last season’s win total would appear to be a strong step forward, and even matching the two wins of the spring season should be regarded as a success.

“We want to show up every game and make sure the other team understands that we are there to give it our all.” — Keith Bennett