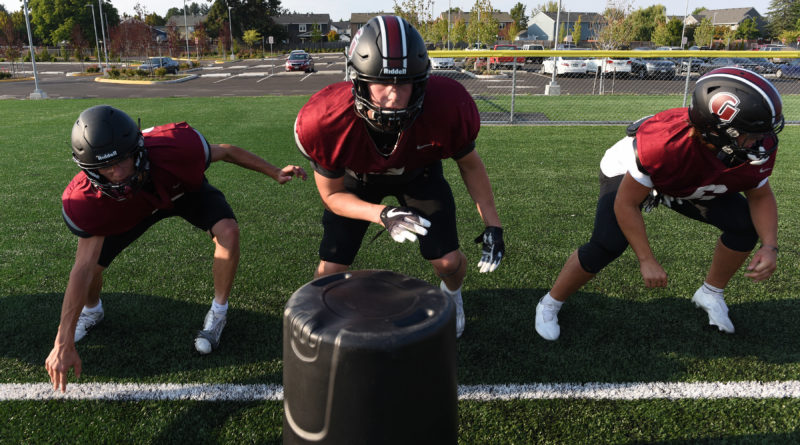 SBLive Oregon will break down every 6A, 5A and 4A team in the state leading up to the 2021 fall football season. Here’s our look at the Glencoe Crimson Tide of the Class 6A Pacific Conference.

Fasel has been “the man” in the Crimson Tide program since arriving on campus as a freshman, making the Class 6A all-state team at linebacker as a sophomore and last season moving from running back to quarterback in Week 4 to power a late-season charge which included wins over McMinnville and Franklin. The superlatives flow from Reynoso’s lips when he discusses Fasel, who has 255 career tackles, was a first-team all-Pacific selection on both sides of the ball as a junior and made the SBLive Oregon all-state second team at linebacker. “We don’t blitz with him much, but he reads plays phenomenally,” Reynoso said. “His highlights are all of him making the correct read, working downhill and making the tackle. He’s a tank now, and he makes my job easier as a D-coordinator.”

Schlottmann is a triple threat in the Glencoe lineup, making the all-conference second team on the defensive line and receiving honorable mention at kicker and tight end. He showed his readiness for the fall campaign with a dominant performance at the Metro Area Lineman Challenge, winning four categories and earning MVP honors. “He has grown so much this last season,” Reynoso said. “The spring season we got was huge for him, and he’s gotten a lot of exposure over the summer. I think he will be the top tight end in the state. He increased his physicality by moving to the defensive line, and he has great hands.”

Thornbrue is better known as a post player on the basketball court, twice making the all-Pacific team on the hardwood, but Reynoso thinks he is ready to blossom as a football player after making the all-conference second team on defense in the spring. “He’s got phenomenal slippery tendencies to get after the quarterback, and he’s just starting to embrace the physicality of the game,” Reynoso said. “He has a lot of upside and is still growing into his body.”

Voth was an all-conference honorable mention selection at cornerback in the spring, and he’ll likely be on the move on the other side of the ball. With Fasel likely to stick at quarterback and the graduation of backup Jackson Kind, Voth will shift to tailback and become the primary rusher. “Last year, he matured in his physicality, and he’s gotten a lot stronger and more explosive,” Reynoso said.

Anthony played mostly in the secondary during the spring, moving between cornerback and free safety. He projects as a starting corner this season and will rotate with Voth in the offensive backfield. “He’s one of the bright spots in our junior class because of the growth he’s made,” Reynoso said. “He’s been one of our leaders in the weight room since we were allowed to get back in, and he’s gotten so much stronger and more impressive physically. He has that physical presence — he loves to hit.”

O’Leary dressed for the varsity team as a freshman and shined during the summer 7-on-7 league. If all goes according to Reynoso’s plan, he’ll be ready to take over the starting job by midseason, moving Fasel back to being the battering ram at tailback, where he was a first-team all-Pacific pick the past two seasons. “Trevor has a really strong arm and is an athletic kid,” Reynoso said. “He has the potential to be one of the most dynamic quarterbacks we’ve had at Glencoe.”

Stadelman’s brother Colton was a three-year starter for Reynoso from 2017-19. Kyle won’t match that total, but he’ll start for a second consecutive season, moving from guard to tackle this fall. “He’ll be a stronghold offensively for us,” Reynoso said.

Krussman is a combat sports fiend, placing sixth at 285 pounds at the Pacific district wrestling meet in June and competing as a high-level judoka. He brings that mentality to the football field. “He is the hardest-hitting puller that I’ve coached,” said Reynoso, a former college lineman. “I’ll be holding the bag, and he’s hit me a couple of times where he just shook me. He has a lot of potential and is picking up our offense.”

While Stampflee’s older brother, Austin, is a sleek speedster who won three state medals on the track as a sophomore in May, Colby is a bruising offensive lineman whom Reynoso has tracked since he played in an all-star game in Idaho as a middle-schooler. “He’s just a really tough, hard-nosed North Plains farm kid,” Reynoso said. “He just loves hitting and beating people up. I’m excited to see what he will do this year.”

Chimal started at guard in the spring, going toe-to-toe with some of the best linemen in the league and holding his own despite often giving up 60-70 pounds. He’s moving to fullback this season and will play alongside Fasel at inside linebacker after forcing three fumbles as a junior. “For three years, he’s been our honey badger, one of the toughest kids I’ve coached,” Reynoso said.

The Crimson Tide limped to a 1-3 start to the spring season before Reynoso decided to go old-school offensively, moving Fasel to quarterback in Week 4 and abandoning the spread for a two-tight end, power-running set. After losing to Sherwood in their first game with the new look, they closed with emphatic victories over McMinnville and Franklin.

Both quarterbacks who started as sophomores and were projected to battle for the job this season decided not to turn out, prompting Reynoso to stick with the power set to start this season while O’Leary develops and waits his turn.

No matter what, Reynoso will find a way to get No. 32 on the field somewhere. Fasel is not a 7-on-7 standout or a combine wonder, which has hurt his standing in recruiting circles, but he’s starting to draw looks from Northwest FCS schools. While Reynoso raves about his play, what he loves even more is his commitment to the program and making it better.

“Nobody in the state has done what he’s done over the last three years,” Reynoso said. “He just loves the game of football, and everything he does is about making others better and making the team a success. He wants to complete this rebuild that we’ve gone through the last three years.”

Even when (or if) O’Leary takes the reins at quarterback, don’t expect the team to start slinging the ball all over the field. The Crimson Tide have embraced the physicality that Reynoso, who played offensive line at the University of Oregon from 2001-04, has emphasized since taking over in 2017 as the program emerged from a two-year stint as an independent.

Players such as Schlottmann and Thornbrue exemplify the more physical mentality Reynoso has brought to the program. It also has cost him some players, as this fall’s senior class comes to camp with just six members, but Reynoso isn’t likely to lighten up to keep his numbers high.

“That’s one of the struggles we’ve had at Glencoe,” he said. “You can have a couple of good players, but if you don’t have the numbers, it’ll all fall apart.”

The Crimson Tide ended a six-year playoff drought in 2019, and how they fare against their Hillsboro rivals, Century and Liberty, in back-to-back weeks to open conference play likely will determine whether they can make it back-to-back postseason trips.

“Three years ago when I took over here, being a league champion was something that we would talk about, but deep down, we knew there was a long way we had to go to get there. Now, it has to be the expectation. We have to play to that level. That’s something these seniors have worked toward.” — Ian Reynoso