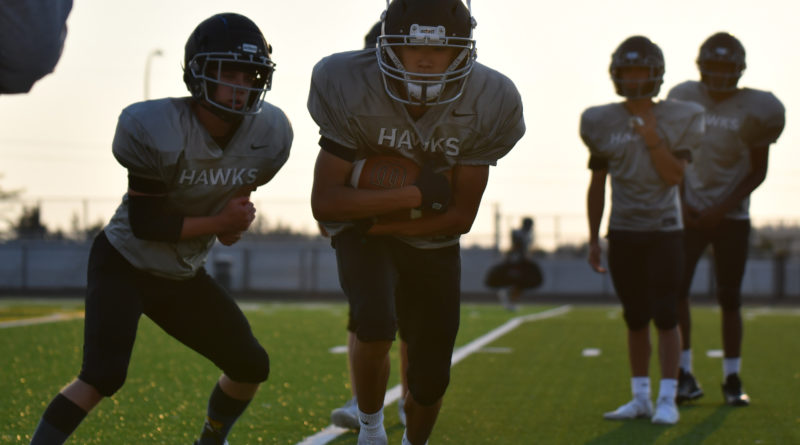 SBLive Oregon will break down every 6A, 5A and 4A team in the state leading up to the 2021 fall football season. Here’s our look at the Nelson Hawks of the Class 6A Mt. Hood Conference.

Hazel described Kirsch as a high-energy, intense player who brings to the football field the athleticism borne of playing multiple sports. Kirsch is part of a core of juniors who, Hazel said, “have really stepped up from day one and have been very receptive and have done everything we’ve asked them to do.”

Gray is projected to play as a slot receiver and a cornerback. “He was a sophomore on the (Clackamas) varsity basketball team, so you know he’s going to be pretty athletic, quick,” Hazel said. Even in no-pad workouts, Gray has produced the impression that he’ll be physical, as well. “He’s not the biggest, but quickness, toughness and aggression go a long way,” Hazel said.

Allen is about 6-foot-2 and 195 pounds, relatively small for an offensive lineman. But Hazel said he’s athletic, strong and long. “He’s done a great job at the inside linebacker spot (in 7-on-7 work),” Hazel said. “Everything I’ve heard about him is he’s one of those tough guys, those throwbacks. We’re excited about him.”

Though an incoming sophomore, Julison was, Hazel said, in the mix to be on varsity at Clackamas had he still attended that school. “He carries it well. He moves well,” Hazel said, adding that Julison is grasping everything the coaching staff is teaching, making the underclassman look like a veteran. “He’s going to be a guy we really lean on,” Hazel said.

Leontyuk appears to be a player who will let his production speak for itself. “He’s a no-nonsense kid,” Hazel said. “He gets in, does his work. Doesn’t talk a lot.” Hazel called Leontyuk a grinder, and his dedication is shown in his traveling to Idaho for a USA Football event. “You don’t love starting a sophomore at the linebacker or running back positions,” Hazel said, “but he’s kind of the odds-on favorite to be there at one of those two spots.”

Quarterback to be determined

Entering preseason practices, two juniors and a freshman were in the mix for the starting position.

Junior Alex Nita, coincidentally, was a freshman at La Salle Prep in 2019, Hazel’s next-to-last season at his former coaching job.

“He’s got a strong arm,” Hazel said, “and the kids like him. He has one of those infectious personalities.”

Hazel said Nita’s mechanics and footwork aren’t finished products, “but it comes out of his hand hot.”

“He’s the total package,” Hazel said. “He can throw it. He can run. He’s got a good frame on him. We’ll see how he picks up the offense.”

Hazel said the coaching staff is taking the long view with Durdahl.

“He’s got an opportunity to compete,” Hazel said, “but we’re also going to be smart with him and we’re not going to put him in a situation that’s detrimental to his development and his growth.”

Named for the first Black woman to be appointed to the Oregon Supreme Court, Adrienne C. Nelson High School opens this academic year. The school in Happy Valley — southeast of Portland, in the northwest corner of Clackamas County — will be the fourth full OSAA member in the North Clackamas School District, joining Milwaukie, Putnam (also of Milwaukie) and Clackamas.

The Hawks are jumping right in to varsity competition instead of playing junior varsity teams as is frequently done by first-year schools. The Nelson football team will be led by Hazel, who spent the previous seven seasons as head coach of La Salle Prep, a Catholic school in Milwaukie from which Hazel graduated.

“Leaving a place you love is difficult,” Hazel said.

But at Nelson he saw opportunity. Taking the job meant seizing the opportunity to create something from the ground up and to build with the surrounding community a connection that didn’t exist at a private school populated from throughout the area.

And he saw attractions. Clackamas High School has enjoyed the backing of the Happy Valley area, so Hazel knows the community is supportive. Facilities at Nelson will be brand new.

Weighing everything, he said, “It was just an opportunity that was too good not to take a look at.”

Nelson will have about half of the non-senior students who would have gone to Clackamas and several dozen seniors, according to OSAAtoday. For the football team, that translates to little varsity football experience.

“But the positive is there’s a bunch of kids, especially in that junior and sophomore class, who are looking at the opportunity to be starters and are chomping at the bit for that,” Hazel said, “versus, looking at the previous school, going, ‘OK, I’m going to have to sit and wait my turn and be a backup or a ‘3’ to a couple of seniors.’ That’s the positive side: We’ve got a bunch of kids who are excited to get on the field, compete and get after it right away.”

Based on how teams have fared in the recent past, it would be difficult for Nelson to have a more challenging start to its maiden season. Three of the Hawks’ first four games are against Barlow, Central Catholic and Clackamas — each of which made at least the OSAA semifinals in 2018 or 2019.

The opposition, however, is of less concern to Hazel than how his team handles its own business. Using the cliché of taking things one snap at a time, one day at a time, he stressed the aim of constant improvement as the program finds its rhythm.

“If we just work on getting better every single day and taking care of our work, we’ll be in a spot to really have some momentum at the end of the season,” he said. From there, he added, “We’ve got 22 starters coming back the next year that are ready to rock and roll.”

“I think we have a chance to really set the culture for the school.” — Aaron Hazel