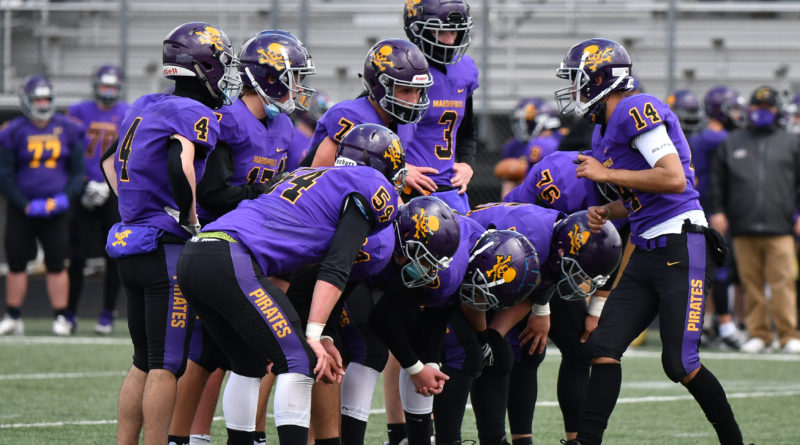 SBLive Oregon will break down every 6A, 5A and 4A team in the state leading up to the 2021 fall football season. Here’s our look at the Marshfield Pirates of the Class 4A Sky Em League.

In Montiel, the Pirates return arguably the top quarterback in 4A. Statistically speaking, Montiel was in a class of his own as a junior. He passed for 1,711 yards — nearly 300 more than any other player in 4A — and a state-best 22 touchdowns against four interceptions. He will be without his favorite target since Niblett graduated, but he will have plenty of offensive talent surrounding him. “It’s nice to have a very talented quarterback like Dom,” Lemmons said. “Ideally, we’ll be a little more balanced this year and able to run the ball more.”

Waterman has been the heart and soul of Marshfield’s defense the past few seasons. The 74 tackles he tallied in the spring were the second-most in 4A, and he led the state with 13 tackles for loss. The Pirates will rely on him to take on a larger offensive load at running back to help supplement their dynamic passing attack. “Ezra was the defensive MVP of the league as a sophomore and a junior,” Lemmons said. “He’s just a great defensive player and pretty good on offense as well.”

As a junior, Daugherty reeled in five interceptions — tied for the most in 4A. He could play an equally significant role for Marshfield on offense. “He’s a lockdown corner,” Lemmons said, “and a very explosive wide receiver.”

The Pirates have a plethora of versatile offensive weapons, and Davidson might be the most unique of them all. At 6-foot-6, he was strong enough to start at defensive end last season and athletic enough to play wideout. Montiel will have no shortage of targets. In Davidson, he has one that few teams will be able to cover.

Mateski is another long, athletic receiver who fits seamlessly into Marshfield’s offensive scheme. A second-team all-league selection as a junior, he could be in store for a breakthrough season this fall. Lemmons said Mateski is coming off a knee injury, but the coach called him “a talented player.”

As a junior, Murphy racked up an astonishing 29 tackles while playing on the defensive line. He’s a three-year starter at center and very much a leader for the Pirates. For all the talent the team has at the skill positions, Murphy provides crucial stability in the trenches on both sides of the ball.

Velazquez transferred from Reedsport before his junior year and had no problem making the leap to the 4A level. He was a first-team all-league selection at linebacker and a second-team pick at running back. “Very, very nice kid,” Lemmons said. “Hard worker and very tough. I think he could be a really standout player this year.”

Few teams in 4A return as much talent this season as the Pirates.

Their loss to Marist Catholic last season dashed any hopes they had of playing for an unofficial state title, but in the de facto third-place game, they beat a strong Gladstone team in blowout fashion.

Nearly the entire team is back for Marshfield. The program lost five seniors, and only two were truly impactful players.

With Montiel at quarterback and a seemingly endless line of talented pass-catchers surrounding him, the Pirates will be able to hang with any team they face. The key will be establishing a more consistent running game to create a more balanced attack than they had last season.

Lemmons said winning a state championship will be the ultimate goal, and he believes they are capable of doing just that as long as a few key things happen.

“It’s going to be about coming together as a team,” Lemmons said. “Buying into the team atmosphere, putting the time in and working hard. Of course, we need to stay healthy. We’ve got a group of guys who believe; they’re going to work hard and go after it.”

“We want to try to compete for the blue trophy at the end. That’s our goal. I think if the pieces of the puzzle come together, we’ve got a good shot at it.” — John Lemmons