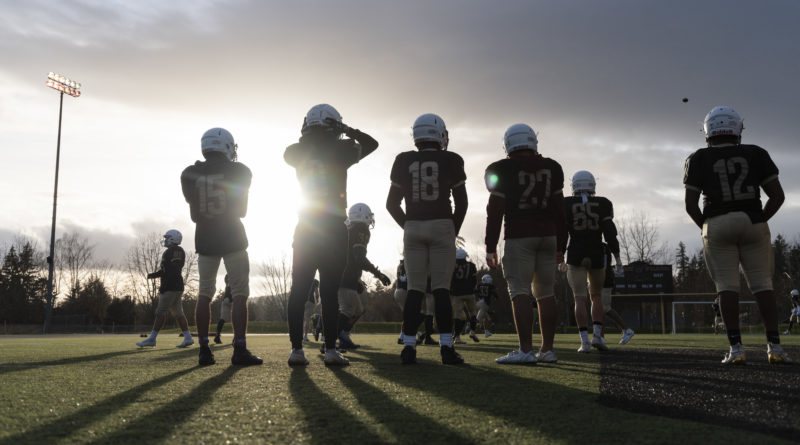 SBLive Oregon will break down every 6A, 5A and 4A team in the state leading up to the 2021 fall football season. Here’s our look at the Southridge Skyhawks of the Class 6A Metro League.

Klee had a solid first season as a starter, completing 52 of 110 passes for 525 yards and five touchdowns. Reducing his interception rate (10 in 110 attempts) will be key to the Skyhawks improving significantly this fall. “He understands the offense well and is very effective in delivering the ball where it needs to go,” Bickler said. “He’s a great kid and teammate and is very coachable.”

Aviles is a three-year starter at cornerback who made 37 tackles (most among returning players) and broke up eight passes as a junior. He also became a dependable possession receiver during the spring, catching 12 passes for 97 yards. “A great leader and great competitor, Nathan is an extremely hard worker,” Bickler said.

Albright averaged nearly seven yards per carry as a junior, running for 216 yards and three touchdowns. He’ll take on a bigger role on the other side of the ball, where Bickler predicts he’ll be “a dominant force” at linebacker. “He flies around the field and is aggressive,” the coach said. “He also has a great running back frame with deceiving speed and runs downhill very well.”

Battilega became a full-time starter during the spring and has begun to draw interest from several colleges thanks to his great frame and blocking ability. “He is the anchor of the line and a flat-out dominant force in the center who creates mismatches,” Bickler said.

Carranza is another three-year starter in the secondary. He followed a banner sophomore season by leading the team in interceptions (two) and receptions (13) as a junior. He finished with 21 tackles and six pass breakups, as well as 156 receiving yards and a touchdown. “He has a nose for the football and is extremely coachable,” Bickler said. “A great leader and teammate.”

Tucker is the next receiver coming down the pike in the program. He had a standout debut season with 12 catches for 78 yards, and he made 17 tackles and five pass breakups in the secondary. “He’s very athletic and can play almost any position on the field,” Bickler said. “He has good hands and speed, and he flies around on defense and makes the difficult plays.”

Menegas made his mark on defense in the spring, finishing with 25 tackles (seven for loss), 12 hurries and three sacks to draw the attention of several small colleges. He should make more of an impact on offense this season. “He’s a big, strong kid with good hands,” Bickler said. “He will be a force on both sides of the ball.”

The Skyhawks will have almost an entirely new offensive line this season, drawing from JV starters such as Sanft, who performed well at this summer’s Metro Area Lineman Challenge and appears up to the task. “He has a big frame and is very strong,” Bickler said.

Another of the newcomers from the JV offensive line, Sagiao has a huge frame and takes advantage of his long arms and reach to ward off defenders.

The brother of former Southridge lineman Zach Slail (now at Air Force), Adam has many of the same traits and should become a two-way starter in short order. “He’s very strong and a dominant kid on both sides of the ball,” Bickler said.

Powell bided his time on the JV team in the spring, but Bickler sees him becoming a force on both sides of the ball this season.

While the six-game spring campaign finished as Southridge’s seventh consecutive losing season, Bickler saw some positives that he hopes will help bring an end to that streak this fall.

“It was an unusual year, having to play in the spring, and I’m happy our kids got some time on the field,” he said. “I believe we have room to grow as a team and program and will work hard to achieve this growth.”

One area the Skyhawks will need to show growth is ball security. They turned it over 17 times in six games, a definite sign of growing pains with a first-year quarterback and all new skill players surrounding him.

Klee now has a better understanding of the offense, and he has a deep reservoir of receivers to dip into, with Carranza, Aviles and Tucker forming one of the better trios in the league. Albright slots into the starting job at tailback, with Powell looking like his likely backup.

The offensive line will be almost all new, but Bickler likes what he’s seen from the young group.

“We have good size up front, and a lot of our success will be up to how fast some of our younger linemen progress as they transition to varsity football,” he said.

The defense has to replace the Moxley brothers, who finally enjoyed full health for a full season and combined for 126 tackles, 20 tackles for loss, 20 hurries and 8.5 sacks, as well as Sorrell (38 tackles) and Porter (11 tackles, nine pass breakups).

The secondary is in good hands with Carranza, Aviles and Tucker pulling double duty on the backline. Menegas looks ready to become one of the Metro’s top pass rushers. The defensive line, though, appears to be a work in progress.

The schedule sets up favorably for the Skyhawks, with three winnable games in nonleague play — Cleveland, Roseburg and South Salem combined to go 3-13 in the spring — and home games against Westview and Aloha that will be key to their chances of earning a first winning season since 2013 and the eighth in the program’s 23-year history.

“We want to focus on getting better every day and being good teammates. We’re focusing on the kids who show up every day and work hard and realize we will need to rely on them when it’s crunch time. I am just excited for football being able to return and being able to play a full season.” — Kevin Bickler