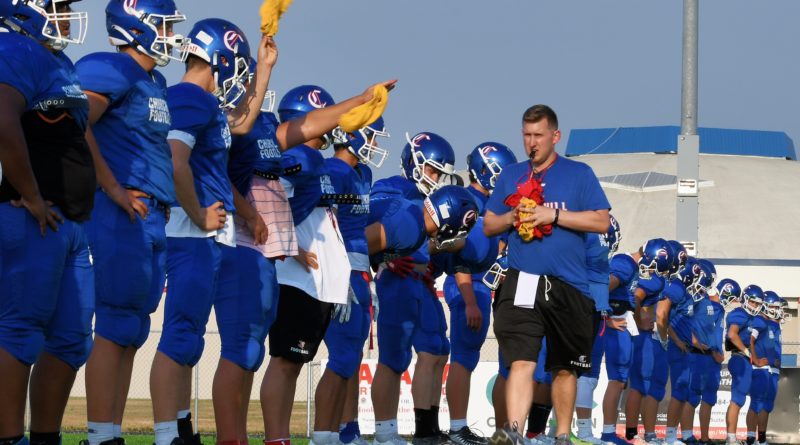 SBLive Oregon will break down every 6A, 5A and 4A team in the state leading up to the 2021 fall football season. Here’s our look at the Churchill Lancers of the Class 5A Midwestern League.

The Lancers are loaded on the offensive line, where they return a wealth of experience. The leader of that group is Thomas, who started at center and guard last season. “He’s been a starter since 2019 and started as a sophomore a couple years ago,” Robinson said. “He’s just really, really solid.”

Womack is a ball-hawking corner who pulled in three interceptions last season — third-most in 5A. He was a first-team all-league selection in the spring and will be a lockdown presence on the perimeter once again. “He’s a shortstop on the baseball team — that type of guy,” Robinson said. “He’s a great cover corner and has really good instincts, but he’s also a great tackler and really reliable.”

Churchill returns a second-team all-league receiver in Van Camp, who had four touchdown catches during his junior season and will be the team’s go-to weapon in the passing game. “He has definite college potential,” Robinson said. “He’s like 6-4, 180, and just needs to put it all on film this season.”

Rohde had four sacks in the spring season, tied for second in 5A. Robinson isn’t shy about his expectations for Rohde this fall. “I expect him to be the top defensive player in the league,” Robinson said. “He is extremely physical and was hard to block last season. He has a college future.”

As sophomores, the twins started at center and left tackle, respectively. They will play massive roles for the Lancers this season. “They’ve been working really hard in the weight room,” Robinson said. “They’re both about 6-1, 220-240. They’re both athletic and work really hard. They’re the type of players that high school coaches love to have.”

Pence put up good numbers in his first season as Churchill’s starting quarterback, and Robinson said he has a nice connection with the players in his class. This season, the Lancers will look for him to be more consistent, and that will start during his camp competition with Mikel. “Chace throws a really good deep ball and has the ability to make plays with his arm and his legs,” Robinson said. “Tyler is a really tough, competitive kid — plays baseball and basketball and has a really good feel for the game.”

Frye started his high school career at South Eugene but transferred to Churchill after the Axe canceled their spring season. He was solid in his debut season with the Lancers and could take a massive step forward this fall. He’s one of the most physically gifted linemen in the league at 6-foot-3, 340 pounds. “He did some good things but was a little bit raw,” Robinson said. “He’s been working really hard and could have a big year. He’s got some college potential. Schools are looking for him to be a bit more consistent and play with a high motor.”

Robinson said Bowles is Churchill’s strongest player in the weight room. He started his career as a running back and linebacker, but he has transformed himself into a monster on the offensive and defensive lines. “He works really hard,” Robinson said. “All the kids respect him. He’s definitely a team leader for us.”

Mills and Peck will split the workload at running back. They’re similar in their skill sets, and both are physical backs. “Combine that with a good O-line and we think we have the makings of a pretty good running team,” Robinson said.

The Lancers’ goal this season is to return to the playoffs. They believe they absolutely are capable of making a trip to the postseason — and potentially going on a long run once there.

They will aim to do so by being a physically dominant, power-running team that gets the most out of a stacked offensive line.

“I think we’ll have a really solid running team,” Robinson said. “We’re going to be line-led. We have a good line this year that we’re excited about. Those guys have worked really hard and we think they’ll be able to lead us.”

The talent is there for Churchill on both sides of the ball. The Lancers will look to overpower opposing teams in the trenches and deploy a large collection of talented athletes all over the field.

The one aspect Robinson said he believes could help Churchill take another step forward is a better sense of team cohesiveness.

“We need to care more about the team instead of ourselves,” Robinson said. “One thing that I found last year — and it wasn’t just our team, it was everyone around the state — kids really felt like they had missed time because of COVID, so they wanted to make it all up right away. In my experience, it was probably the season I saw the most selfish and ‘me-first’ behavior. We just need to make sure that we commit to looking out for each other.”

The Lancers’ final game of the regular season could have postseason implications — they will face a talented Willamette team on the road Oct. 29 in a matchup that could prove to be one of the most important games on their schedule.

“It’s a group of about 16 seniors and 20 juniors. We were a young team last year that played a lot of sophomores and juniors. Now we’re older and a little more experienced. Our group has worked really hard, and I think they’re going to see the fruits of their labor.” — AJ Robinson