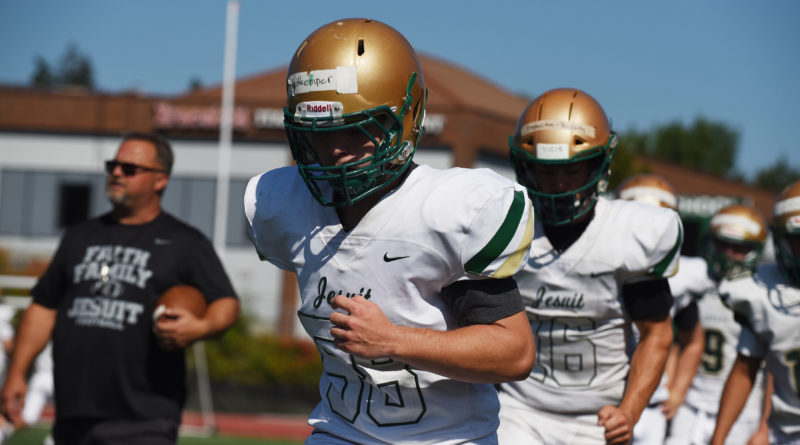 SBLive Oregon will break down every 6A, 5A and 4A team in the state leading up to the 2021 fall football season. Here’s our look at the Jesuit Crusaders of the Class 6A Metro League.

Rincon is the latest in a long line of standout running backs for the Crusaders. After serving as the No. 3 behind a couple of 1,000-yard rushers in Kade Wisher and Ted Atkinson as a sophomore, Rincon was the lead back in the spring, running for 718 yards and two touchdowns in five games. He has committed to play lacrosse at Bellarmine University in Louisville, Ky. “A very shifty and tough runner,” Potter said.

Michael’s twin brother also is a lacrosse standout, having committed to Binghamton University in upstate New York. He played sparingly as a junior, but Potter said his role should increase in his final season.

McKelligon started on both sides of the ball as a junior and was Jesuit’s second-leading receiver with eight catches (including both of the team’s passing touchdowns) for a team-high 147 yards. “A very good athlete who will continue to play at the next level,” Potter said.

Blake entered the starting lineup on defense last season and flashed the skills that should take him to the next level. He also backed up Rincon and ran for 111 yards and a team-high four touchdowns on 21 carries. “He has a good sense of the game and makes plays,” Potter said.

Johnson got his first taste of varsity action in the spring, catching two passes, and showed off his game-breaking speed during track season, barely missing the 100-meter final at the 6A Showcase meet. “He has excellent physical ability and is ready to break out as a wide receiver,” Potter said.

Miller is a three-year starter in the linebacking corps. Potter called him a team leader who should play in college.

Raymond is one of two returning starters on The Franchise, the Crusaders’ nickname for their always-stellar offensive line. Potter said Raymond “was one of our best linemen last year.” He’ll be counted upon as a leader of that unit this fall.

A key contributor in the secondary each of the past two seasons, Viteznik will be counted upon to have a strong season as a starter.

Speer can line up as a linebacker or strong safety depending on scheme and team needs. “A true playmaker who will be a standout on D,” Potter said.

Staley carries on a couple of traditions at Jesuit. The Crusaders always seem to have an all-state caliber fullback leading the way for their star tailbacks, and Staley — the son of Chris Staley, an all-state defensive lineman on the 1987 Jesuit team — took over for Logan Horton last season without skipping a beat. “He has the chance to be one of our very best,” Potter said.

Who will be the next Jesuit lineman to play at the FBS level? It could very well be Khouri, who started as a sophomore and drew very high marks. “He will be very good for us,” Potter said.

Wallace is another lineman for whom Potter has high hopes this season. “He’s one of our strongest players and has an excellent work ethic,” Potter said. “I feel he will be a force.”

Cleeland is a transfer from Skyview in Vancouver, Wash. He should take over the starting center spot from the graduated Brody Marler.

Roth moves up from the JV team and will spell Rincon in the backfield. “He shows great potential and will be in the mix for us,” Potter said.

Ferrero started in the secondary as a sophomore and will look to be a two-way starter this fall. “He has improved his speed and strength,” Potter said.

Burton was one of the beneficiaries of Potter using the spring season as an extended camp looking ahead to this fall. He started as a freshman and showed his potential to be a big-time playmaker on both sides of the ball.

Burt didn’t start last season but got reps in the backfield (his 17 carries for 86 yards were third-most on the team) and on defense.

Last season always figured to be a bit of a rebuilding season for the Crusaders. Throw in how the spring campaign was thrown together seemingly at the last minute, and Potter’s decision to treat the six-week season as an extended spring training camp made sense.

The result was just the third losing season in Potter’s 34 years at the Southwest Portland school and the first since 1992.

But Potter — who needs seven victories to catch Roseburg legend Thurman Bell (332-154-1) for No. 2 on the state’s all-time coaching wins list — got to learn a lot about the youngsters who are now charged with battling for an eighth consecutive Metro League title.

“I feel all our kids worked very hard this past spring and continued into the summer to be ready to have a good season,” he said.

As Jesuit’s offensive line goes, so goes the team, and this fall should be no exception. It’s a young group with only two returning starters (and just one senior), but Potter has confidence there will not be much of a drop in play.

“It will be tough to replace Charlie, Declan and Brody,” Potter said. “Not only were they great football players, but they were also leaders and great role models.

“Our line will be young, but I feel that (offensive line coach) John Andreas does remarkable things with our kids, and we feel they will respond and carry on the tradition.”

The biggest question mark entering camp is at quarterback. Last spring’s Week 1 starter, senior Tatum Lewis (a Vermont commit in lacrosse), still is recovering from an ACL injury suffered in Week 3, and his backup, Matt Irwin, has moved to Idaho.

The top contenders to be under center in the opener against West Linn are senior Porter Harris (6-0, 165), the JV starter in the spring, and sophomore Jacob Hutchinson (6-1, 180), another lacrosse standout crossing over to the gridiron.

Whoever wins the starting job will be tasked with revving up an offense that averaged 13.6 points per game in the spring — a far cry from the 48.8 points the team averaged in the 2019 season.

Even a modest improvement, combined with another solid season on defense, should have the Crusaders in the mix for yet another Metro League title and deep playoff run — they’ve reached the quarterfinals in each of the past 12 postseasons.

“Our goal is the same one we have every year — improve every day. If we work hard and are willing to make sacrifices for what is best for the team, we may be able to play a lot of games this year. Our preseason is brutal, and we will see how healthy we come out after it, but it will test our abilities and prepare us for playoff-type performances.” — Ken Potter