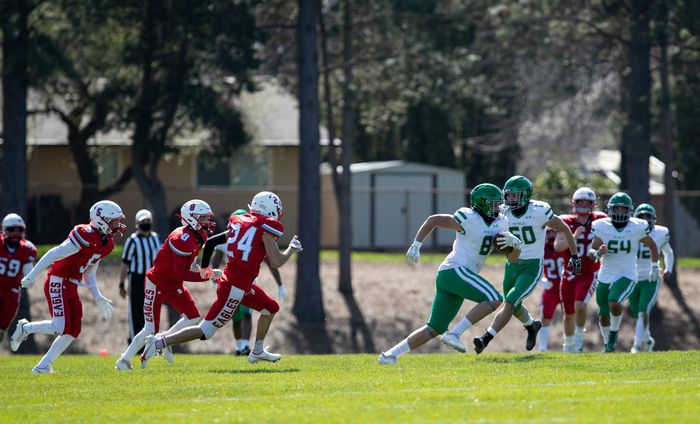 SBLive Oregon will break down every 6A, 5A and 4A team in the state leading up to the 2021 fall football season. Here’s our look at the Reynolds Raiders of the Class 6A Mt. Hood Conference.

Photo by Howard Lao, for The Oregonian/OregonLive

Baldwin returns after leading the then-run-heavy Raiders of Troutdale with two touchdown catches in the spring. “He’s probably one of three guys who are going to be a top target,” Murphy said. “He’s got great hands, good route running, big body (6-foot-3, 200 pounds).” Baldwin also is projected to get time on defense.

The 5-11, 180-pound Katz is “probably the toughest kid, pound for pound, on our team,” Murphy said. “Extremely hard work ethic.” After Katz’s sophomore season, teammates elected him team captain. “That shows you what kind of a kid he is,” Murphy said. Katz will play both sides of the ball (inside linebacker on defense), but his focus will be at guard.

Williams played limited roles last season on offense and defense. At running back, he was behind Miles Wilson and Emmanuel Igbonagwam, who monopolized carries by running backs. The 6-foot, 200-pound Williams should get his turn this season, and Murphy said he has a huge upside. “He’s a tough kid, works really, really hard,” Murphy said. “I expect him to be the main focus, as far as running backs, in our offense.”

Jones gained varsity experience last season at defensive end, and the initiative he has shown in the offseason could be a springboard to being not just a part, but a key part, of the Raiders’ defense this season. “He’s had a great offseason,” Murphy said. “Very dedicated, works extremely hard. He has improved immensely.” Murphy said Jones is also positioning himself to play some on the offensive line.

Dickson played both ways as a sophomore and gained considerable experience. “He will be moved to safety because of his intelligence,” Murphy said. “He’s a really, really smart kid. He understands the offense and he understands the defense very well.” Reynolds also plans to find ways to exploit Dickson on offense, meaning he probably will play different positions to maximize his skill set.

Murphy succeeds Ryan Aldred, who resigned after five seasons as head coach. Murphy, who was defensive coordinator the past two seasons at Reynolds, is installing a new offense and altering the defense.

The Raiders will aim to pass the ball more than in the veer system they played under Aldred. Reynolds threw 35 passes total in its four games in the spring season, and 127 passes in 10 games in 2019.

“We are going to throw the ball a heck of a lot more than we did in previous years,” Murphy said, adding that the goal is about a 60-40 split between run and pass.

With no player returning who took any appreciable number of snaps at quarterback in the spring, Murphy declined to identify who is in the running for the starting position this season. As conditioning workouts began in August, he said, “There are probably three players who are pushing to get reps.” All of the candidates, he said, are new to the system and new to varsity football.

“The first expectation (for a quarterback) is to lead,” he said. “They have to have an understanding of this offense. I’m the one who built it and brought it in, along with my coaching staff. … We’re progressing really, really well.”

Murphy expects fewer than 10 seniors on the roster. Many of the non-seniors have been indoctrinated to varsity action, either in the spring or in the fall 2019 season.

“When you have a younger team with a lot of potential, we must remain patient,” Murphy said.  “Picking up the offense and defense is ongoing, but kids are progressing well.”

In a best-case scenario, Reynolds punches above its experience level, masters new systems on both sides of the ball and finds a way to finish immediately below the acknowledged Mt. Hood Conference favorites. Even if that proves out of reach, another .500 or above season and increased familiarity with new offensive and defensive systems should pay off in future seasons.

“They work together as a team. I know that’s a redundant statement to a lot of people, but it’s true to form with this group.” — Kelly Murphy