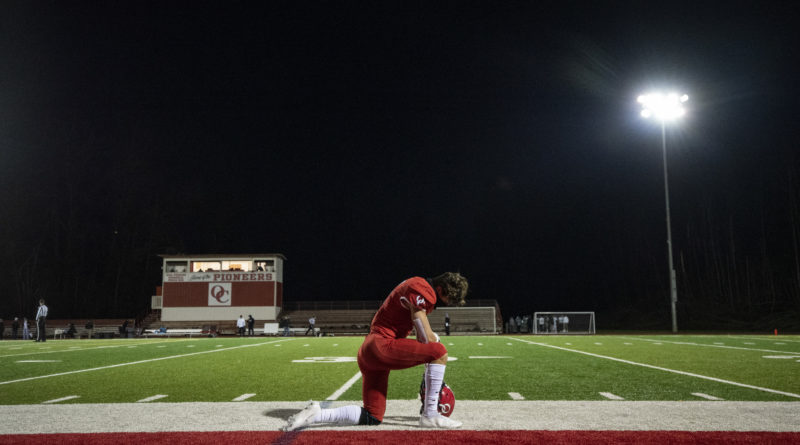 SBLive Oregon will break down every 6A, 5A and 4A team in the state leading up to the 2021 fall football season. Here’s our look at the Oregon City Pioneers of the Class 6A Three Rivers League.

Shaw might be the most accomplished player returning for the Pioneers. He made the all-Three Rivers first team at receiver last season after catching 26 passes (second on the team to Jahleel Heath’s 30) for 277 yards and a touchdown, and he was a second-team selection at safety. “He’s the kind of kid you build a program around,” Hedrick said. “His leadership has been invaluable. He’s just a great leader on the field.”

Heitschmidt went from JV starter to varsity playoff starter during his sophomore season, and he continued that upward career track in the spring, catching 20 passes for 130 yards and a touchdown in earning all-league honorable mention at receiver. He was a second-team all-TRL kick returner, and Hedrick anticipates using him at multiple positions this season. “Right now, we’re just moving him around, and every time we try him at a new position, he takes it over,” Hedrick said.

Castaneda was a first-time starter for the Pioneers in the spring and made the all-TRL honorable mention list at offensive tackle. “He’s the anchor of our offensive line, someone you can build a line around,” Hedrick said. “He’s a vocal leader for us, a grunt worker, doing all the things you want a lineman to do.”

Newborn entered the starting lineup in the spring and was an honorable mention all-league linebacker. He’ll also get plenty of touches out of the backfield. “He’s someone we need to keep on the field as much as we can,” Hedrick said. “He’s a really solid athlete — good, quick feet, great agility — and I’m loving his skill set catching the ball.”

Sorensen, an accomplished long snapper, earned the starting job at center as a sophomore and received all-league honorable mention. “He’s a very solid football player who works his tail off,” Hedrick said. “He’s also a really solid deep snapper, a next-level type, one of those unique kids who can really fire it back there.”

While Kelly didn’t make the impact expected of him on offense last season, he did impress on defense, making the all-TRL honorable mention list. Hedrick sees him being a two-way starter, moving from tight end to running back. “A really strong leader, first on the field, last to leave,” Hedrick said. “I’m really excited about him.”

Nimo was an all-TRL honorable mention defensive lineman as a sophomore, but Hedrick anticipates using him only on offense this season. “He has good vision, and he moves really well for a big man,” Hedrick said. “For a big kid, his feet are as quick as any I’ve seen.”

Stiegeler has bounced around during his high school career, beginning at Sheldon as a JV starter as a freshman before moving to Churchill and starting for the Lancers during the spring. He’s now at Oregon City and in competition with junior Jake Lopez (5-9, 165) and freshman Ben Schneider to take over for Trey Martin, who’s now at Southern Oregon. Hedrick has been impressed with how well Stiegeler takes control of the huddle and how quickly he’s learning the offense. “I really like what he brings as a runner and passer,” Hedrick said.

Jordan was second on the team in rushing last season with 72 yards on 10 carries. He’ll be in the mix at running back, and he appears likely to take over kicking and punting duties from Christian Ferreyra, who graduated after earning second-team SBLive Oregon all-state honors at placekicker.

As Hedrick got acquainted with his new team, Carter is one of the players who stood out during early workouts. Hedrick envisions Carter, who had seven carries (including a touchdown) and three catches out of the backfield as a junior backup, being a two-way starter this season. “I really love the skill set he brings,” Hedrick said. “He’s been incredibly coachable and has a great work ethic.”

Kuykendall is another player who caught Hedrick’s eye during the team’s first workouts after his hiring. “He’s a very aggressive lineman who has real good technique,” Hedrick said.

Kearney played primarily on the JV team last season but has impressed Hedrick during the first part of camp. “He’s really good on his reads, keeps a low pad level,” Hedrick said. “I like what he can do. I think we’ll see good things from him this year.”

From the outside, the Oregon City football program looks like a sleeping giant, just waiting for someone or something to awaken it.

That task now falls to Hedrick, who takes over for Dustin Janz after Janz resigned following the spring season. Hedrick comes to the Portland suburb after stints at South Albany, Central and, for the past two seasons, Willamina.

“(Athletic director) Andy Jones reached out to me in the beginning of July and planted the seed,” Hedrick said of how he came to his first Class 6A coaching job. “The administration went out of their way to make this a very positive situation. When you hear about that tradition, the excitement in the community, that ignited my fire. I’m as excited about this opportunity as I’ve ever been.”

Because of the late start to his offseason work with the Pioneers, the team has gone old school in the early going, with names written on masking tape on the helmets and practices getting back to basics as Hedrick plans to transition from the spread attack Janz ran to a more traditional offense featuring a punishing ground game.

Considering the Pioneers ran for just 59 yards per game during the spring and 77 per game in 2019, it could make for a jarring change, but it’s one Hedrick is committed to making. It also should help whoever wins a wide-open competition for the quarterback job settle into the lineup.

“As our quarterbacks develop, we could go from a two-back look to one-back,” Hedrick said. “It all depends on how much time we have to install our offense and the development of our quarterbacks.”

The move to a power running game leans into one of the program’s strengths — the offensive line brings back three starters and adds Kuykendall and junior Jake Hood (6-5, 280).

The defense should look very familiar to Oregon City fans. Hedrick kept the defensive staff, led by coordinator Bryan Blix, relatively intact, feeling lucky that he inherited those coaches. He also inherited four players who received all-league recognition on that side of the ball.

That said, the Pioneers allowed nearly 39 points per game during the spring, and for them to make a move up the TRL standings, significant improvement on defense will be necessary. Otherwise, the best Oregon City can hope to do in Hedrick’s first season is to sneak into the playoffs as one of the final at-large qualifiers.