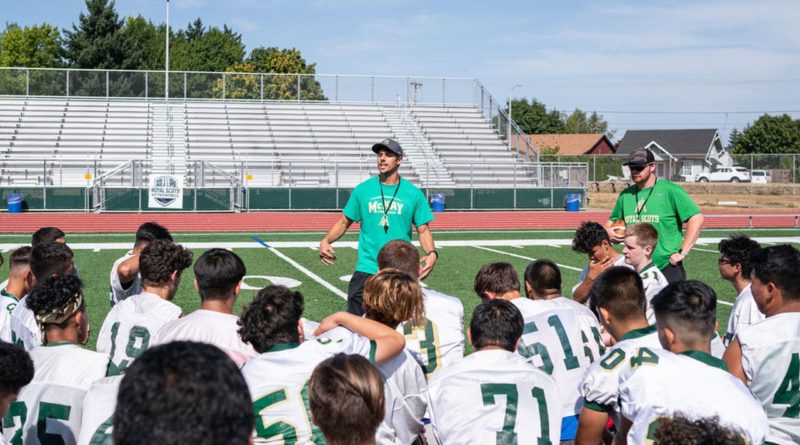 SBLive Oregon will break down every 6A, 5A and 4A team in the state leading up to the 2021 fall football season. Here’s our look at the McKay Scots of the Class 5A Northwest Oregon Conference West Division.

Chavez started on the defensive line and rotated in at tight end in the spring season. “He’s a high-motor, really dedicated individual,” said Piper, who can’t recall Chavez missing a workout in Piper’s three years with the program. “He’s a big-body, athletic tight end who can go up and make plays, especially on a jump ball and in the red zone. And defensively, he’s got an extra gear.” Chavez is 6-feet-2 and about 220 pounds — and exploits his dimensions. “He has good size, good strength, good length, and he really uses that to take advantage of situations at the defensive line,” Piper said, adding that Chavez probably will start on both sides of the line of scrimmage.

Lee will be a third-year starter, having led the team in receiving as a sophomore and a junior. Last season, he had 22 receptions for 386 yards. “He’s an athlete who has a nose for going and getting the ball,” Piper said. “We expect him to win one-on-one matchups.” Lee didn’t play organized football until his sophomore season, and since then, Piper said, “He’s upped his commitment level every year.”

The 6-1, 225-pound Garibay started every game in the spring and is the team’s top returning tackler (based on assists and solo tackles). Piper called him the “ultimate team guy,” citing Garibay’s acceptance last season of a move from running back to the offensive line when injuries left the front thin. “He became one of our better offensive linemen at the end of the season based on grades at the end of every game,” Piper said. This season, Garibay will return to running back. On offense and defense, Piper said, Garibay leaves an impression on opponents. “When he comes downhill, he hits with authority,” Piper said.

As a freshman, Fuimaono started the first two games on defense (intercepting a pass in Week 2) and started the next two games at quarterback before he got hurt. At quarterback, he completed 42 of 74 passes (57 percent) with four touchdowns and one interception. “He’s extremely football smart,” Piper said. “He’s got a very bright football mind. He’s somebody who’s going to pick up on a lot of different little things.” Fuimaono has used the offseason to hone his craft, making all of the team’s workouts and attending camps. “We think the sky is the limit for him,” Piper said, “just because of how smart he is and his ability to move through his read progressions. And he really puts the ball in a catchable spot.”

Another player who stood out as a freshman, Anthony was the team’s second-leading receiver last season, with 20 receptions for 243 yards and a touchdown. He also started on defense the second half of the season, intercepting two passes — one of which he returned for a touchdown. Piper said the best word to describe Anthony is competitor. Regardless of the situation, he said, Anthony believes he will come out on top. “He has a lot of confidence,” Piper said, “and that comes from the fact that he works really hard.” Anthony brings more than resolve to the field, though. Piper said he’s great getting out of the break, runs great routes and has a high football IQ. “He wants to be coached up hard,” the coach said. “And he is a playmaker. If he has an opportunity to make a play, he’s not afraid of that moment, and he wants to seize that moment and take advantage of it.”

Salgado (5-11, 220 pounds) played on the junior varsity last season and is expected to be a meaningful contributor this season. That expectation springs from Salgado’s unstinting work ethic. “He just puts his nose down and he grinds,” Piper said. “He prides himself on outworking somebody.” At a team camp this summer, Salgado’s performance made an impact on Piper. “I was extremely impressed with his play at nose tackle and his ability to get off the line of scrimmage really quickly,” Piper said.

As a sophomore, Keys started all season at safety and forced two fumbles in the Scots’ game against North Salem. “He’s an aggressive, hard-nosed football player,” Piper said. “He’s going to come downhill and look to make plays.” With the varsity experience he gained in the spring, Keys has produced big expectations for his junior season.

Hopes are high for the Scots of Salem, fueled by the return of a quarterback who delivered as a freshman and the team’s two leading receivers from last season. Plenty of players in the defensive backfield also have varsity experience.

With the departure of several key linemen, there is plenty of opportunity for newcomers to grab a starting spot and carve out their niche. What Piper saw at a team camp this summer bolstered his confidence.

“I thought our linemen there did a great job of being able to hold their own and compete,” he said.

While acknowledging the losses up front from the spring, Piper said, “We’re excited about the guys we do have.”

In building his program, the third-year coach has placed a premium on the quality of the person — not just the quality of the player. Hardworking, dedicated, coachable, competitive — Piper mentions those qualities far more often than a player’s bench press or 40 time.

About Chavez, for example: “He takes a lot of joy and pride in not only doing things for himself to be successful, but trying to leave a positive legacy and impression on people who are coming after him.”

About Garibay’s shift from running back to offensive line last season: “He moved there without any questions asked.”

About Salgado: “He doesn’t want to take a day off.”

About Keys: “He’s going to take coaching and instantly going to look to apply it.”

“I think we’ve got a really quality group of young people in our program,” Piper said. “They genuinely care for each other and want to see each other be successful.”

Of course, the scoreboard on Friday nights doesn’t measure the quality of a team’s character. And the scoreboards last season showed McKay on the short end in all six games — including four against Class 6A schools.

Piper said a key factor this season will be how quickly first-year starters make the transition to prime time. As for the inexperienced offensive line, Piper thinks Fuimaono’s presence will be an asset.

“He’s an excellent decision-maker, and he really understands how to assess the field presnap,” Piper said. “He’s a great help to what is going to be an inexperienced offensive line.”

Another key performance indicator will be how well the Scots play to the end of the 48th minute on Friday nights.

“We started strong this past spring, but our next big step is to finish games,” Piper said. “That will be a big indicator of our success this season. If we can grow there, I’m really excited for what happens next.”

Without the likes of Class 6A Sprague and West Salem on the schedule, McKay will be punching more against its own weight class this season. Breaking the oh-fer from last season is the first step, and it’s conceivable the Scots are competitive in a high percentage of their games.

“Our kids who have been around, they expect to make a run and have an opportunity to go to the postseason.” — Brandis Piper