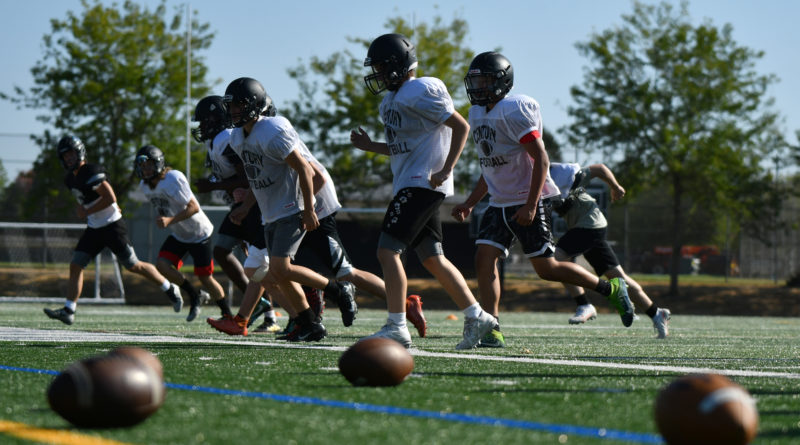 SBLive Oregon will break down every 6A, 5A and 4A team in the state leading up to the 2021 fall football season. Here’s our look at the Century Jaguars of the Class 6A Pacific Conference.

Garcia split time in the backfield with Emilio Hernandez last season, earning all-Pacific honorable mention while rushing for 231 yards and a touchdown on 46 carries. “He is a power runner who looks really good during summer workouts,” Kernan said. “He will lead our backfield this fall.”

Parrish was an all-Pacific honorable mention selection in the secondary during the spring, making 17 tackles and breaking up three passes. He’ll take on more of a role on offense this season. “We will lean on Brendan to make plays on both sides of the ball,” Kernan said.

Springer was one of the team’s top contributors as a junior, leading the Jaguars with 14 catches for 220 yards and two touchdowns and earning second-team all-conference honors at safety, intercepting three passes and making 23 tackles (two for loss). “He has put in a lot of work this offseason,” Kernan said. “We are asking him to be the leader in our secondary as well as make plays for us on offense.”

Mahlman was an all-Pacific receiver in the spring but will transition to quarterback, taking over for Zach Boehler and already drawing interest from Augsburg College, a Division III school in Minneapolis. “He was asked to step in at receiver last year, as it fit our game plan, and he bought right in,” Kernan said. “This year, he will get the opportunity to show all of his hard work at the quarterback position. He has looked good at college camps this summer, and we are extremely excited to watch him this year.”

An honorable mention all-conference selection at linebacker in the spring, Palmeri finished with 28 tackles (most among returning players) and four quarterback hurries. “I look forward to seeing what he has in store for his senior year,” Kernan said.

Nicholson made the all-Pacific honorable mention list in the secondary, finishing with 18 tackles, an interception and a forced fumble. His nine catches for 74 yards were second-most on the team. “He is a very smart football player who we are excited about this fall,” Kernan said.

Gallardo, honorable mention all-conference on the defensive line (21 tackles, six for loss, six hurries), is one of the few Century linemen with varsity experience. “We will lean on him to help get the line on track,” Kernan said.

Ellis transferred from Del Valle, Texas, during the spring. He had five catches for 66 yards for the Cardinals in the 2020 fall season, and he has drawn looks from Southern Oregon, Western Oregon and Augsburg College. “He is very long and a great route runner,” Kernan said. “We’re excited to have him back this fall.”

Luafutu received action in four games as a freshman, making 12 tackles at linebacker. He has not missed a single workout during the summer, and “he is ready to make a huge leap this year,” Kernan said. “He will now be a key piece to our defense.”

Wedel is another player who got time on the varsity as a freshman (six catches for 34 yards, five tackles) and appears ready to make the big leap to full-time contributor this fall.

Smith was a quarterback in youth ball but transitioned to receiver at the JV2 level during the spring. “He is a kid who could make the leap and make plays for us on Friday nights,” Kernan said. “He is committed to getting better at any position we need him to.”

Bake, who played on the JV2 team last season, is one of several younger linemen who will be counted upon to step into bigger roles this fall. “He learned from our older guys and has been committed this summer,” Kernan said. “He will look to pick up where the seniors left off.”

The Jaguars made the most of the shortened spring season, posting their first winning record since 2012 after making the playoffs in 2019.

To do so, they’ll need to replace one of the most decorated players in program history in Brody Reese, a unanimous first-team all-conference selection who headed to the University of Washington after finishing his prep career with 48.5 tackles for loss and 17 sacks.

With Reese and leading tackler Tau Tofaeono (72 tackles, four for loss) off to college, the Jaguars will turn to a couple of secondary stalwarts in Springer and Parrish to become the leaders on that side of the ball.

“Brody was great to have because of the attention he was given,” Kernan said. “It created lanes and gaps for others to execute. However, we always ask our defense to work as one unit and excel in their jobs. We must make sure that we are disciplined and stick to our keys to be successful.”

Mahlman split time with Boehler at quarterback as a sophomore, throwing for 692 yards and six touchdowns with nine interceptions in six games. After moving to receiver during the spring season, he’ll return under center this fall, and he’ll benefit from the addition of Ellis to a receiving corps that includes Springer and a couple of youngsters in Wedel and Smith who represent the next wave of Jaguars stars.

If Mahlman makes a smooth transition back to quarterback and the defense doesn’t suffer setbacks from its graduation losses, a second consecutive winning season and playoff berth could be in the cards.

“Our last full season, we made the playoffs, and we finished the spring season 4-2. Building off the past success and making the playoffs again this year would be great for our kids. We have some great young talent stepping in for the seniors we lost. Playing together and trusting one another will ultimately get us where we want to go.” — Danny Kernan