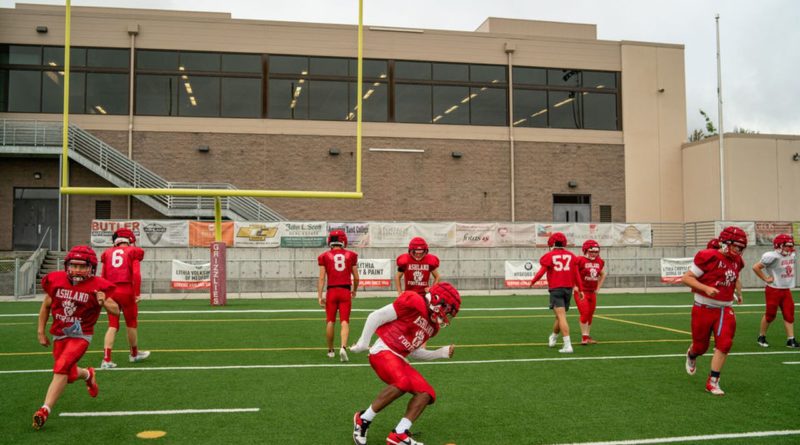 SBLive Oregon will break down every 6A, 5A and 4A team in the state leading up to the 2021 fall football season. Here’s our look at the Ashland Grizzlies of the Class 5A Midwestern League.

Kimbrough is a versatile athlete who would have competed for Ashland’s starting quarterback job last season if things had gone as planned. During preseason workouts before his junior year, he broke a bone in his arm and was unable to throw a football. He still played receiver in the spring. Fully healthy, he’ll aim to be back under center this fall. “He really worked on his versatility,” Lehnerz said. “He’ll be competing for the quarterback job. If he doesn’t (win), he’ll be a nice weapon for us both offensively and defensively.”

A standout baseball player, Kemper was Ashland’s de facto quarterback in the spring after Kimbrough was injured. The two will be competing for the starting spot this season. If he doesn’t start under center, Kemper could have a massive impact as a receiver. “His football IQ is way up there,” Lehnerz said. “He was able to pick up the offense quickly and made the right reads. He’s pretty athletic where he can scramble, and he is pretty tough.” Kemper also will play strong safety, where Lehnerz describes him as a great tackler who has a nose for the ball.

Lehnerz describes Tripp as “a ball of muscle.” A 5-foot-7 slot receiver, Repp is physical and quick and will be a major asset for whichever quarterback is throwing him balls. “Our quarterbacks loved him last spring,” Lehnerz said. “He could get the short ball and then make something happen with it. He can run a great route and get open. As a corner, he’s got great ball skills. … We’re looking for him to have a great year.”

The anchor of the offensive line will be Latham, who will start at center and middle linebacker. “He’s just a tough, gritty kid and is going to do a lot of great things for us this season,” Lehnerz said.

Over the past few years, Abel has experienced a major growth spurt and has developed into a physical presence in the trenches. At 6-foot-4, 240 pounds, Abel plays offensive tackle and on the defensive line and will be a team leader on both sides of the ball. “Guys look up to him for the work that he’s put in, and that he’s had to put in, to get where he’s at,” Lehnerz said.

Part of a large group of talented sophomores, Negra will have a big role for the Grizzlies this season. He’ll play safety and wideout and bring a ton of athleticism and playmaking ability to both sides of the ball. “He’s a big, tall kid, around 6-3, really fast, great hands and really physical,” Lehnerz said. “Just a great all-around athlete. We’re looking to see what he can do against varsity (competition) in nine games.”

After a spring season in which the pandemic drastically affected what they were able to do — and limited them to a JV-only schedule — the Grizzlies simply are glad for the chance to get out and compete.

“We want to build off of that four-game season that we had last year and give our seniors a good senior year,” Lehnerz said. “But we want to be in every game. We’ve got a tough conference. Thurston’s tough and Crater’s always tough. That’s the benchmark. You see how you’re doing when you play those teams.”

Just a few seasons ago, Ashland was competing with those teams. The Grizzlies finished the 2019 regular season as the No. 6 team in 5A. This season will mark the first step in their efforts to return to that level.

Lehnerz hopes Ashland’s strong nucleus of young players can get up to speed quickly and make up for the lost games and practices that were taken away by the pandemic. He wants his team to play with aggression, and he believes the Grizzlies have a chance to climb the standings as some of their Midwestern League rivals will be fielding younger, less experienced teams.

“If we’re in the middle of the pack, I think we’re on the right track,” Lehnerz said.

“Some of our incoming freshmen haven’t played contact football since seventh grade. So, we want to get those kids all up to speed. … We want to have a sub-varsity season and make sure everybody is getting reps. We’re really trying to get back on schedule from everything that was impacted by the pandemic.” — Beau Lehnerz