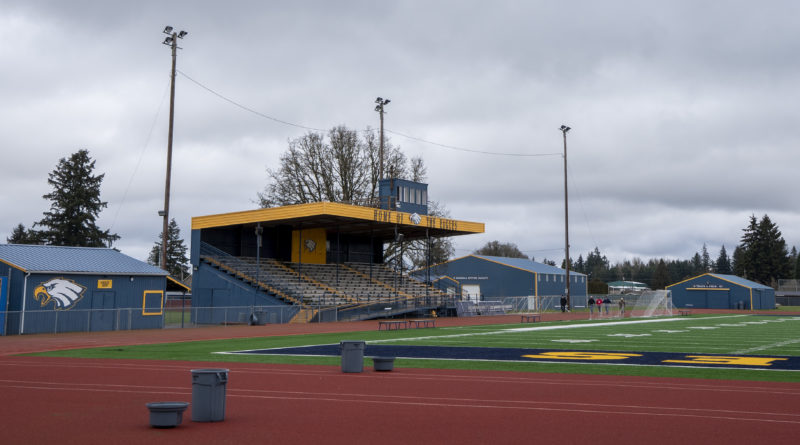 SBLive Oregon will break down every 6A, 5A and 4A team in the state leading up to the 2021 fall football season. Here’s our look at the Stayton Eagles of the Class 4A Oregon West Conference.

A battle for the starting quarterback spot, and the second-place finisher is expected to be a starting safety.

Brown has been a varsity player since he was a freshman. He has field experience and is a competitor. His strengths as a signal-caller are his ability to run the ball as well as his physical toughness, Nyquist said.

Leming is more of a traditional pocket passer. He had one start at quarterback in the spring.

“He is a little bit slippery,” Nyquist said. “He has the ability to make some people miss and keep the play alive.”

Hubert passes the eyeball test with his 6-5, 270-pound frame.

“He’s not just a typical big kid,” Nyquist said. “He’s got really nice hands, and he’s tough to bring down after he catches it.”

On defense, let’s call him a linebacker for now, but he can play anywhere the coaching staff puts him. In the spring, dealing with COVID, there were a lot of lineup changes. Hubert played nose tackle, outside linebacker and inside linebacker.

Another quality tight end and linebacker. Built a little different from Hubert. Daniels is the 6-4 guy with long arms. He’s also a skilled basketball player. This will be Daniels’ third season on varsity.

Frith has the potential for a big season on offense. He also is quite the weapon as a kicker and a punter.

“The other thing nice about having him back there as punter, if something goes wrong, he has the ability to fix it because of his athletic ability,” Nyquist said.

He’s 5-8 and 150 pounds and a player to watch. You know that means he’s fast. Nyquist said King is an all-around good player, and he is absolutely explosive after he makes a catch.

Hughes battled through injuries in the spring and did not play as much as he hoped. Now he hopes to make up for lost time.

“He’s definitely a guy we can turn around and hand the ball to and he’ll get us some positive yards,” Nyquist said.

Can’t give him a definitive position. Just put him on the field. Somewhere. Anywhere. He’ll make a play.

On offense, he can be a wideout, a slot or even in the backfield. He’ll give different looks on defense, too. He has the potential to be a big-time contributor this season.

Nyquist says he will always strive for a playoff berth. He will always believe his teams are capable of making the postseason. This year is no different.

But he also is realistic.

“We’re kind of a middle-of-the-pack team going into the season,” he said. “We could finish in the top two or three in our league. But if we have some injuries …”

Depth could be an issue. That is an area the program must improve, Nyquist said.

Stayton did gain some experience in the spring, playing a number of sophomores. Since then, it’s been nothing but positive reviews from the coach.

“We’ve had some time to be in the weight room a little bit and grow and mature,” Nyquist said. “We’ll be a more athletic team than we were.”

The Eagles installed a new defense last season, as well. There were growing pains, for sure, but Nyquist was encouraged by what he saw and by what he sees in the near future.

“I think the strength of our team is going to be our defense,” he predicted.

“It will be good for people to go out and have that experience and watch games. I think it’s really good therapy for everybody — for kids, coaches, parents and communities. High school football has a bigger impact on what goes on in our world than some people understand. It’s the glue that holds everyone together.” — Randy Nyquist