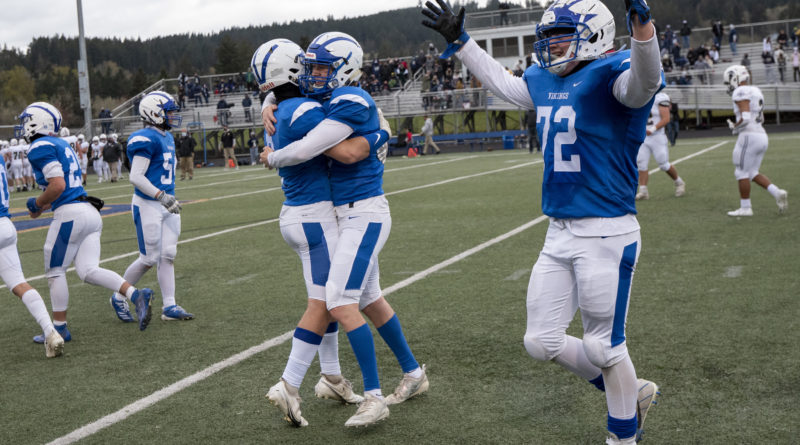 SBLive Oregon will break down every 6A, 5A and 4A team in the state leading up to the 2021 fall football season. Here’s our look at the Mazama Vikings of the Class 4A Skyline Conference.

Heaton shared time at fullback during the spring, but he showed he’s capable of carrying a heavy load in rushing for 571 yards and eight touchdowns on 108 carries en route to first-team all-Skyline honors. “Zeke will be the guy at fullback,” Lease said. “He has lived in the weight room this summer and will be tough to tackle.”

One of the fastest players Lease has coached in his nine years at Mazama, Kindt is drawing looks from area track programs after winning the 100- and 200-meter titles at the Skyline district meet in May. He also drew raves for his work on the gridiron last spring, running for 177 yards and three touchdowns, averaging 32.2 yards per punt and returning a kickoff 92 yards for a touchdown against Thurston. He was a second-team all-conference punter and received honorable mention at running back.

Yancey was a two-way standout for the Vikings in the spring, making the all-Skyline second team at linebacker with 30 tackles (1.5 for loss) and rushing for 226 yards and a touchdown. He’ll move to the offensive line this season after the graduation of two all-leaguers up front.

Tramp was a second-team all-Skyline selection on the offensive line and had six tackles as part of the mix at defensive tackle. “Nathan is the anchor of our offensive line,” Lease said. “He is our leader.”

Gailey will team with Kindt in the backfield in the Vikings’ wing-T attack after getting limited action during the spring season. He finished second at the 4A state track meet in the 100, running an 11.21 in the final, and ran second leg on the 4×100 relay team that Kindt anchored to a state title. “He wants to be a playmaker and game-changer this year,” Lease said.

Burk has the unenviable task of stepping into the shoes of departed receiver Cole Brosterhous, now plying his trade at Western Oregon. Burk played mostly on defense as a junior but now will be counted upon to stretch the field when the Vikings take to the air. “Savien has lived in Cole’s shadow, but it is his time now to shine, and he knows it,” Lease said.

The spring turned out to be a special football season at the Klamath Falls school, as the Vikings rolled to a 6-0 mark — including victories over Banks, at Thurston and finally in the 4A Showcase championship game against Marist Catholic.

While the OSAA does not recognize the 27-21 win over Marist Catholic as an official state championship, the game certainly had the vibe of a title game, and the victory was just as sweet for a program that had waited 42 years for the moment.

“We preach to our boys that adversity is only an opportunity to get better,” Lease said. “That is what they did. As things changed every week, they embraced the adversity and got better.

“I don’t care what anyone says. We were the best team in the state at 4A, and we proved it by playing the best and beating them, including the 5A two-time defending state champs. We are the 2020-21 4A state champs.”

There will be a lot of new faces taking the field for the Vikings, including under center, where junior Brendon Monteith (6-0, 180) and sophomore Tyson Van Gastel (6-2, 185) will vie for the starting spot. Monteith ran the JV team in the spring and Van Gastel the freshman squad, and Lease said the battle between them likely will run through the season-opening jamboree before he makes a decision on who will start Week 1 at Marshfield.

The offensive line will have new starters at the tackles, where Lease expects juniors Caleb Moran (6-2, 285) and Keegan McDonald (6-4, 290) to become forces along the offensive front, joining Tramp, Yancey and senior Isaac Pena (5-10, 300), who moves from center to guard.

Another player to keep an eye on is Trevor Anderson, a 5-10, 195-pound junior who will start at inside linebacker, where the Vikings lost Peyton Wright to graduation and Kadin Bolanos to focusing on baseball and a potential scholarship in that sport.

Lease believes if the newcomers can survive an opening gauntlet that includes last season’s third-place 4A team (Marshfield) and 3A champion (Cascade Christian), the Vikings should be ready to challenge for an eighth consecutive Skyline Conference title.

“We need to adjust to the talent we have, but if we do, we will win our eighth conference championship, and we will beat some teams that people think we shouldn’t. Our kids believe now, and the power of belief is everything.” — Vic Lease