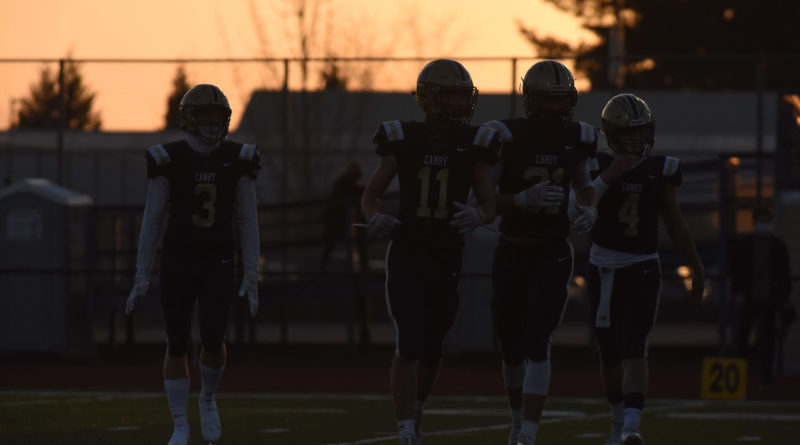 SBLive Oregon will break down every 6A, 5A and 4A team in the state leading up to the 2021 fall football season. Here’s our look at the Canby Cougars of the Class 5A Northwest Oregon Conference West Division.

Strand is 6-feet-5 and 270 pounds, will be a three-year starter on offense and has orally committed to Oregon State. “He’s such a dynamic athlete that we’re going to play around with him as a blocking tight end. He might catch a few passes,” Joyce said. The coach called Strand an “elite-level talent” who will make a big impact on both sides of the line of scrimmage.

Gibson suffered a knee injury in Week 4 of the spring season and played sparingly in Week 5 before being shut down. Before the injury, his marquee game came in Week 2, a four-touchdown performance against Hillsboro. Though a senior, Gibson still hasn’t approached his ceiling, having started only about one season’s worth of varsity games. “He’s still learning the game as a quarterback,” Joyce said, “but he’s got everything else around him. He’s got the sense of what he needs to do; it’s all putting it in the right sequence.” This season, knowing Gibson will be able to go through a full preseason camp, Joyce is excited about what he can accomplish. “He’s going to be one of the better playmakers in our area,” Joyce said. “When he settles into a game, I don’t think there are too many quarterbacks better than him in the area.”

The 6-4, 225-pound Brauckmiller will be a third-year starter at outside linebacker and take on a prominent role on offense. He is the team’s top returning tackler and was third on the team in tackles as a sophomore. “Offensively, he’s going to take on a bigger role,” Joyce said, “and I think he’s going to be one of Mikey’s primary targets. … He’s emerged as one of the better offensive players in the state, especially at the 5A level.”

The Cougars’ dependence on Soles, who on offense was projected to be like a basketball team’s sixth man in the spring, increased when Chance Miller — SBLive Oregon’s preseason favorite for Class 5A offensive player of the year — was lost for the season after three games. “When you lose arguably the best wide receiver in the state,” Joyce said, “and you’ve got to replace him — Matt filled those roles to a T. He played great. He’s a dynamic playmaker, and I think he’s going to feel a lot more comfortable this fall in the roles we have him in.” Joyce said Soles also has stood out for the leadership role he has taken on the team.

The identical twins will be third-year starters and, with Strand’s move to tight end, will bookend the offensive line. Each is 6-4 and 250 pounds, and each has enough athleticism to play on the Cougars’ baseball team. “It’s going to be nice to have them to anchor our line this year on both ends,” Joyce said.

Joyce said Konold will start at one of the two running back positions and at inside linebacker. Though a sophomore, Konold is more than physically ready for the roles, Joyce said. “He had a varsity frame coming into eighth-grade workouts,” Joyce said. “It’s just playing experience he needed. You need that practice with the varsity, and with a six-game season it wasn’t feasible for us (to play him on offense as a freshman).”

Joyce said Hagen and Snoderly are projected to start at linebacker after they were stalwarts at the position in the spring. “We were pretty thin at inside linebacker, and as sophomores they really filled those roles,” Joyce said. “We don’t have a huge junior class, and I think these two guys are going to emerge as leaders out of that class.” Joyce said Hagen and Snoderly have productivity that might belie their measurables. “They’ve got a nose for the football,” he said. “They’re not the fastest kids in the world, they just make plays.” Joyce said Snoderly, who was fifth on the team in tackles in the spring, also will start at guard. “He’s got a little bit of nasty in him,” Joyce said, “and I like that.”

The Cougars have shown progress in the win-loss ledger in Joyce’s first two seasons, from 2-7 (playing a Class 6A schedule) in 2019 to 3-3 (against primarily 5A opponents) in the spring.

No one had it easy in the spring, but the hurdles Canby faced seemed tall even when judged against the backdrop of a pandemic-altered season.

“Everyone struggled a little last year,” Joyce said. “A six-game season in the spring is not normal. And then you throw in, (Gibson) lost his best playmaker (Miller) early in the season. In a matter of three weeks, our starting slot receiver, our two starting running backs, two linemen … and then we lose Mikey in Week 4. That was hard.”

The Cougars project to have five third-year starters as part of a robust senior class. Joyce expects some members of a large sophomore class and possibly a few freshmen to contribute.

“We feel pretty confident in our starting 11 on both sides of the ball,” Joyce said in early August. “And finding that depth behind them is really going to be the focus of what we do the next few weeks.”

The Cougars open with nonconference games at Dallas and against West Albany. They close with a home game against perennial power Wilsonville. That Week 8 game against Wilsonville could determine the Northwest Oregon Conference West’s No. 1 spot.

How important that game against Wilsonville will be could be determined by how healthy the Cougars can stay and, Joyce said, how much belief they have in themselves.

“Where we’re looking to take the next step,” he said, “is that quiet confidence in ourselves that we belong in the mention with some of the state’s best.”

“It’s a matter of staying focused, attacking each week and staying hungry throughout. That’s something we have to learn as a program.” — Jimmy Joyce