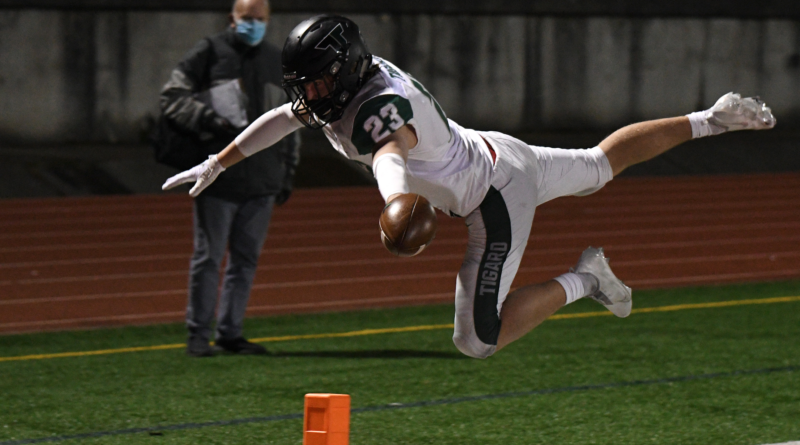 SBLive Oregon will break down every 6A, 5A and 4A team in the state leading up to the 2021 fall football season. Here’s our look at the Tigard Tigers of the Class 6A Three Rivers League.

Perez stepped into starting roles on both sides of the ball as a sophomore and had an immediate impact, receiving all-TRL honorable mention at receiver and cornerback. “He has very good receiving skills and a good work ethic,” Kemper said. “He’s a talented player who we have high expectations for.”

The Tigers were cautious with Boschma after he suffered a hip injury during the run-up to the spring season, limiting him to offense, where he earned all-TRL honorable mention. He’ll be a key two-way player this fall. “He has the capability to be an outstanding player on both sides of the ball for us,” Kemper said.

Jackman last season made the all-TRL second team on defense and received honorable mention on offense. A physical presence who can set the perimeter on either side of the ball, he has drawn interest from several Northwest Division II and III schools. Jackman also shined during the track season, winning the district title in the discus and placing third at the 6A Showcase. “He just continues to develop and get stronger,” Kemper said. “He needs to keep developing as a blocker, but he catches the ball well and runs routes well for a big guy.”

Masters, part of a loaded junior class, started making a name for himself during the spring season, bookending with Jackman on both lines and receiving all-TRL honorable mention on offense and defense. “He’s very athletic but needs to continue to develop in the weight room,” Kemper said. “But he’s another kid that, if he develops, could have quite a few offers his senior year. We’re really excited about him.”

Kemper, who was the offensive line coach before taking over head coaching duties three years ago, takes pride in how every year, the Tigers seem to churn out another standout lineman who goes on to play in college. Beers looks to claim that role after receiving all-TRL first-team recognition on offense and second-team honors on defense as a junior. “He’s become bigger, stronger and more athletic as his career has progressed,” Kemper said. “Now, it becomes his position to lead.”

Wilder moved from guard to center in the spring and made the all-TRL honorable mention list. He dropped some weight during the summer but also got stronger, as evidenced by his performance at the Metro Area Lineman Challenge. “He showed what he’s capable of doing in the spring,” Kemper said. “He’s another lineman we hope will be a senior leader of that group.”

Croxton was a quarterback in youth ball, but his future is at linebacker, where he earned a starting spot as a sophomore and received all-TRL honorable mention. He’ll add fullback duties this season when the Tigers go to two-back sets. “He plays with that edge that you want a middle linebacker to play with,” Kemper said. “He’s a strong, athletic, physical player who understands what we want to do and has transformed his body the last couple of years.”

Hare got his chance after the injury bug hit the offensive line last season, starting the final two games and giving him a leg up in the battle for a starting job this fall. He and classmates Boone Coffman (6-0, 220) and Matt Studer (6-0, 295), both guards, represent the future of the offensive line.

For the first time in several years, the Tigers enter a season without a true No. 1 tailback. Grant got some carries in a backup role as a sophomore, and he’ll be part of a three-way rotation with senior Tommy Martin (5-8, 175) and junior Luke Davis (5-10, 175).

Duenas will be in the mix at receiver and in the secondary behind Perez and Boschma after shining on the JV team in the spring.

Last season figured to be a transition season for Tigard after the program graduated a bunch of talent from a 2019 squad that finished the regular season unbeaten and as the No. 1 seed in the 6A playoffs, only to get knocked off in overtime in the second round by Mountainside.

The process was simply accelerated after quarterback Drew Carter decided to graduate early and head to Boulder to get a head start on his college career at Colorado (a decision Kemper and the staff fully supported), two other potential starters opted to skip their senior season, and all-state lineman Edward Beglaryan tore his ACL at a recruiting combine.

“We were extremely young, with a lot of sophomores playing varsity who only had frosh experience,” Kemper said. “There were some growing pains that we had to go through, but everybody had a lot of the same issues.”

The Tigers started to hit their stride late in the season and closed the spring with a victory over Clackamas that Kemper called “a big steppingstone. We hope we can carry that momentum into this fall.”

This month will be spent sorting out competitions at two key positions — quarterback and tailback. How those battles shake out will play a big part in how Tigard’s 2021 fall season goes.

At quarterback, two familiar names who battled for the job eventually won by Zach Chesler — senior Kellen Jolley (5-10, 175), the No. 2 signal-caller the past two seasons and grandson of legendary coach Craig Ruecker, and junior Cameron Masters-Doble (6-2, 185) — return to the fray, joined by senior Pat Vialva (6-0, 185), a transfer from California power Long Beach Poly.

“All three have traits we like, and all three have things they need to get better at,” Kemper said, not tipping his hand as to who might have the edge in the competition.

A three-way battle at tailback also is shaping up, and it sounds as if all three will get time in the backfield behind whoever wins the quarterback job.

“All three bring a little different element,” Kemper said. “Konner is a physical back, while Luke has good speed and vision, and Tommy is that guy who just has a knack for being slippery and always seems to fall forward after contact.”

Tigard could see its streak of 10-win seasons (in full campaigns) end at four this fall, but like last spring, the Tigers could be sneaky good the second half of the season and a dangerous foe come playoff time.

“Time will tell, but our hope is to play to our potential and be the best that we can be. That’s a dangerous word, potential, and we’ll see how it all unravels. What we’ve focused on since April is to build that team chemistry, that team unity. That championship culture is the most important thing. It’s what has set us apart the last 13 years.” — John Kemper