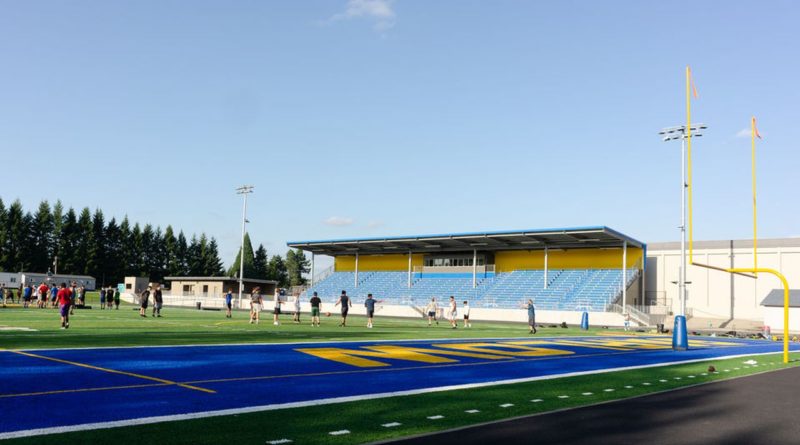 SBLive Oregon will break down every 6A, 5A and 4A team in the state leading up to the 2021 fall football season. Here’s our look at the Barlow Bruins of the Class 6A Mt. Hood Conference.

Jackson said Uptegrove stands out for his strength, his speed and his smarts. “He’ll probably be valedictorian,” Jackson said. “He’s just super sharp, and he’s got great skills.”

Fay was the Bruins’ leading rusher last season, posting team highs of 85 carries, 537 yards (6.3 yards per rush) and four touchdowns. Jackson said Fay stands out for his leadership abilities as well as his physical skills. “He’s a hard-nosed runner with good speed,” Jackson said. “Our intention is to be a physical football team, and he embodies that as a running back.”

Collins stood out on defense as a junior, setting the stage for what could be a monster senior season. “He’s kind of our defensive leader, another extremely intelligent kid,” Jackson said. “He’s got great skills. He’s really tough to pin down as far as getting him blocked.” Collins could play at tight end or running back on offense. “We’ll have to see where we need him the most,” Jackson said.

The 5-foot-11 Dow is part of a well-regarded senior class and is expected to contribute on both sides of the line of scrimmage. “He has good speed, great hands,” Jackson said. “He’s a defensive playmaker. He’s really good one-on-one defending in space, and he’s got long arms, so he’s not afraid to rip a ball out.”

Lavin is 6-feet-2 and 305 pounds, a prominent member of an offensive line that will be counted on in the Bruins’ run-heavy offense. “He’s a big, bulky, tough O-lineman who has a lot of experience,” Jackson said. Jackson said the five tackle-to-tackle starters on the offensive line could average 250 pounds.

Like Lavin, Asimi is a returning starter. “He’s a good, dependable snapper,” Jackson said. “And he’s quick off the ball defensively, too.”

This will be Jones’ first season as a starting quarterback after he received occasional action last season behind starter Cyle Calcagno. “He can run and throw — and he’ll do both,” Jackson said. “I watched him on film and saw him do some things as a backup quarterback that were a great fit for what we’re running. He’s also got that leadership component to him. He understands what leaders do.”

Some coaches, upon taking over a program, take a long view and say that time will be needed to align their philosophies with a team and its players and not to expect immediate results. Not Jackson, at least not at Barlow. Entering his 30th season in Oregon as a head coach, he’s in “now” mode.

Jackson succeeds Chris Koenig, who served as head coach last season on an interim basis after the school rescinded its contract offer to David Kilpatrick-White, who was hired to succeed Terry Summerfield, whose 22-year tenure as the Bruins’ head coach ended with a run to the semifinals of the 2019 OSAA Class 6A playoffs.

“To me, Barlow is one of the best jobs in the state — brand new facility, brand new stadium, the school’s been totally redone,” Jackson said. “You look around and you see all these super things about the job and the situation.”

Jackson said he and the school and community are a match in their football philosophy.

“We want to be the physical outliers in that we’re going to play double tight (end) most of the time, and we’re going to run the ball tough,” he said. “That’s the identity we want. That’s an identity I think the Barlow kids already embrace and like and value.”

Jackson said he has met some coaches in the local youth program feeding the high school in Gresham, and he sees buy-in there, too.

“When I got the job, I got the chance to meet the (high school) kids,” he added, “and I saw it was an even better fit than I thought. It’s a great place for me to be right now. I think we have common ground with parents and with kids about our style of play.”

The Bruins return four of five starters on the offensive line and have an overall robust senior class. Although Jones is new as a starting quarterback, having so much experience in front of him should allow him to find his stride.

With a roster without many seniors in the spring, Barlow was 3-3. This season, looking at the Mt. Hood Conference, Barlow could be the dividing line between the widely acknowledged favorites (Central Catholic and Clackamas) and the remainder of the conference’s teams.

Getting one of the Mt. Hood Conference’s three guaranteed spots in the OSAA playoffs looks like a highly attainable goal.

“We want to win game No. 1,” Jackson said. “And we’ll just take it from there, week by week. There’s no rebuilding going on here. We’re setting out to be as good as can be.”

“We want to be rock solid and give our kids a great experience and be as successful as we can be.” — Tracy Jackson