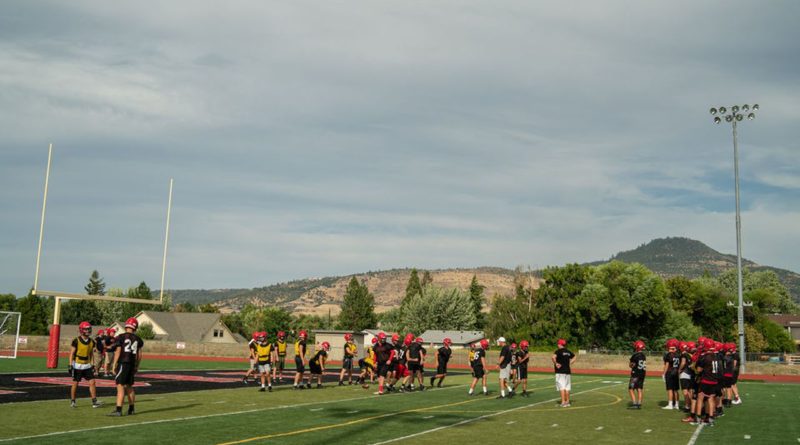 SBLive Oregon will break down every 6A, 5A and 4A team in the state leading up to the 2021 fall football season. Here’s our look at the North Medford Black Tornado of the Class 6A Southwest Conference.

A first-team all-conference wide receiver as a junior, Dyer is a giant 6-foot-4, 180-pound target who can run. “He looks really fast right now,” Chin said. “Bryce went from last football season straight into playing basketball, and I feel like he’s in really good shape. He will obviously be a huge target for us.”

Pugliano shined as a freshman tight end and recently picked up his first scholarship offer, from Oregon. Chin said the Black Tornado will use Pugliano in a variety of ways. “He runs well, catches it well and is physical,” Chin said. “It will be fun to see him continue to develop.”

AJ’s older brother, Ty Pugliano is an intelligent football player who will get time at running back, outside linebacker and potentially safety. “I’ve been really impressed with him,” Chin said. “He did a good job in passing league, so I know he can catch the ball. I expect him to take on a good load in the backfield.”

Angulo gives North Medford critical depth at the running back position. Chin said Angulo and Ty Pugliano complement each other perfectly. “Ty is more of a downhill guy who doesn’t necessarily have breakaway speed; (Alex) is a quick change-of-pace guy,” Chin said. “He has experience in the backfield, and it’ll be fun to get that sorted out.”

Fuiava was a first-team all-conference selection on offense last season. The 6-foot-2, 315-pounder is a future college football player. “He is a big, solid, strong kid who has been to a variety of camps around the country,” Chin said. “He’s starting to get some good looks from that standpoint.”

Santacruz is another large body (6-foot-1, 275 pounds) who is a critical component of North Medford’s offensive and defensive lines. “Erick is just a big, strong kid,” Chin said. “He is really going to help us out on both sides of the ball.”

Kim is a sophomore standout who checks in at 6-foot-4 and 315 pounds. Chin said Kim is starting to get plenty of looks from college scouts. “Terrell is a little bit taller and longer than (Fuiava and Santacruz),” the coach said. “All three are extremely agile and move well. It will be fun to mesh those guys together.”

Following Steve Turner’s retirement, Chin was selected to be the next head coach of seven-time state champion North Medford.

Chin, a longtime small-college coach, spent last season as the offensive coordinator at Crater. The Lost River High School and Southern Oregon alum couldn’t pass up the chance to take over the Black Tornado.

“This is one of ‘those’ jobs in the state, especially down here in the Southern Oregon area,” Chin said. “This place has history and obviously Coach Turner came in and started to get things really rolling.

“This is a good opportunity to jump into a program that is on the rise and has some extremely talented kids coming through over the next years.”

North Medford will be converting to a spread attack, and Chin is excited about the offensive line’s agility.

“It is a big group of kids, but they aren’t just big bodies — they move really well as a group,” Chin said. “I think they can fit into a spread offense really well.”

Chin was quick to point out the Black Tornado will not be switching to a Mike Leach-style Air Raid offense. Instead, North Medford plans to use a physical running attack from spread formations.

The program did lose Southwest Conference offensive player of the year Devin Bradd to graduation, but Chin likes the team’s depth at running back. The quarterback spot is up for grabs between senior Mason Warren and juniors Ty Carpenter and Aiden Horsley.

“Mason has some experience — he played some last year behind Colby (Neron),” Chin said. “Ty has also been taking reps at quarterback, and Aiden is a baseball player and a really good athlete.”

With several key players back and depth at all levels, the Black Tornado have the look of a state title contender. Chin doesn’t want to put the cart before the horse, but the veteran coach isn’t afraid to set lofty goals for the program.

“We want to win the conference title and make a run,” he said. “If that’s realistic or not, we’ll see. As my mentor (former Southern Oregon head coach Craig Howard), who recently passed away, would say, you have to think big. That’s what I learned from him.”

“The summer goals we have been implementing are a culture I believe in. That’s a culture of character, strength and honor and helping them through the game of football to become better men. That’s something we’ve really tried to hit on — that and discipline. Discipline isn’t always a bad thing; discipline is doing all the small things right, focusing on small things for the big picture. That’s what I’m trying to get across to the guys. Our generation is built on answers now, results now. I want them to understand that they have to work toward the stuff they want in the end.” — Nathan Chin