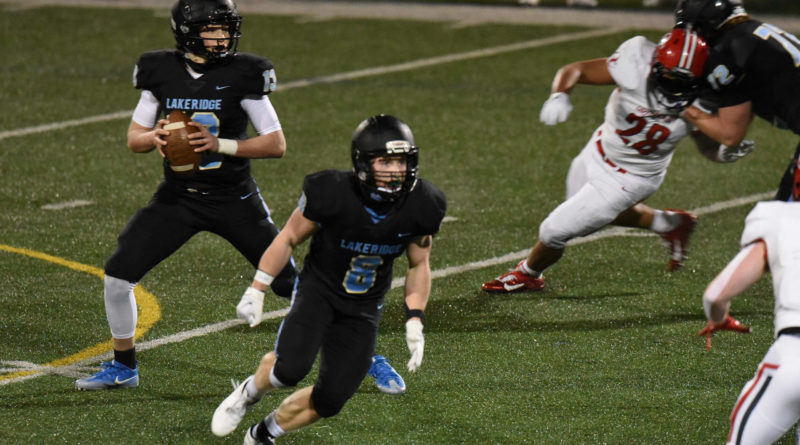 SBLive Oregon will break down every 6A, 5A and 4A team in the state leading up to the 2021 fall football season. Here’s our look at the Lakeridge Pacers of the Class 6A Three Rivers League.

Reichle, a transfer from Wilsonville as a freshman, made an immediate impact in his first season as a starter for the Pacers, finishing with a team-high 87 tackles, two interceptions and two pass breakups in earning first-team all-Three Rivers and second-team SBLive Oregon all-state honors. “If I asked Jake to push his truck from here to Grants Pass, he wouldn’t blink twice before getting to work,” Phillips said. “As a senior leader and captain, Jake has done a tremendous job of teaching our younger kids how to work hard.”

Phillips had a revelation the week before the season opener to go with Oliver as his starting quarterback, and his intuition paid off as Oliver hardly looked like a sophomore in his first season — he completed nearly 65 percent of his passes (94 of 145) for 1,197 yards and 12 touchdowns (two interceptions) in making the all-TRL second team. Oliver accomplished this despite switching throwing hands before the season and pestering Phillips at all hours of the night for months with videos and texts asking questions about his throwing motion. “He is close to getting his number blocked on my phone,” Phillips joked. “The best way to describe Ryan is that he doesn’t work until he gets it right — he works until he can’t get it wrong.”

Curry last season ranked among the team leaders in tackles with 31, earning all-TRL honorable mention. He’ll also get time at tight end this fall. “Jonathan is someone whom I count on heavily to lead our team,” Phillips said. “He is a player who will always give you 100-percent effort and is always looking to help his teammates out.”

Tovey was one of the most dominant linemen in 6A during the spring season, finishing with 51 tackles (nine for loss), two sacks, nine hurries and six pass breakups. He was named to the all-TRL first team and the SBLive Oregon all-state third team. With the graduation of Oregon State-bound tight end Bryce Caufield, he will get more time on offense this season. “Nui is one of the best kids I have had the pleasure of being around,” Phillips said. “He works extremely hard in the weight room and has done everything possible this offseason to take his game to the next level.”

As a junior, Waible was a second-team all-TRL selection at inside linebacker after making 76 tackles (six for loss) and forcing two fumbles. He recently was named a captain, in part because of what Phillips called his rare ability to make sure everyone on the defense feels included. “I have been most impressed with how Zac interacts with our underclassmen,” Phillips said. “His tenacity in the weight room translates to the field. It would take all the coaches and players to drag Zac off the field before he comes out of a game.”

Larson entered the starting lineup on defense in the spring and became an all-TRL honorable mention pick with 26 tackles and three pass breakups. With the graduation of top rusher Andrew Oliver, he’ll have an opportunity to make an impact on offense this season. “Zach is exceptionally fast and has phenomenal footwork,” Phillips said. “There is rarely a time that I haven’t seen Zach on the field after hours perfecting his craft.”

Corbin led the Pacers with 25 catches for 332 yards last spring in earning all-TRL honorable mention. Phillips expects him to make a big jump this season, as he has gained strength and confidence since the start of the spring campaign. He’ll have a bigger role in the secondary, too. “He is a fierce defender with a competitive edge that not many kids his age have,” Phillips said.

The short spring season allowed Phillips to break in several freshmen and see how they fare under the Friday night lights. Olsen might have been the most accomplished of the group, making the all-Three Rivers first team and sharing the team lead with four touchdown catches among his 22 receptions for 347 yards. As he matures, tight end might become his best position. “He is not only one of our best players, but he is also our hardest worker,” Phillips said. “He has never missed a workout and continues to get better every day.”

Azari was an all-TRL honorable mention selection at guard in the spring — a rare accomplishment for a freshman lineman. Phillips already considers him one of the leaders up front. “I’m very lucky to be able to coach someone like Chris,” Phillips said. “Just a very smart young man.”

A third ninth-grader to make the all-TRL team in the spring, Biondine recorded 25 tackles (four for loss) at outside linebacker and received honorable mention. Phillips described him as one of the hardest-working athletes he’s worked with and his breakthrough candidate for the fall, when he also will be in the running back rotation. “Ethan will be a tremendous player for us this fall,” Phillips said.

Kuenzi transferred from Sandra Day O’Connor in Phoenix, Ariz., where he played quarterback for the 6A semifinalist Eagles, going 42 of 70 for 488 yards and five touchdowns in a part-time role. With Oliver entrenched as the starter under center, Kuenzi transitioned to safety in the spring and had 12 tackles in four games. He has added 20 pounds of muscle over the summer and will be Phillips’ Swiss army knife offensively. “He’s been nothing but spectacular since being here,” Phillips said. “He has worked extremely hard to put himself in a position to be a huge difference-maker in our program.”

Johnson is another player who will line up all over the field for the Pacers. Phillips loves the attitude Johnson brings to practice and can’t wait to see how that translates to game action. “He is a special athlete that can do anything on the field,” Phillips said. “He can throw the ball 60-plus yards, jump over the goalpost, and is one of our fastest players.”

Swygard got caught in a numbers game during the spring, when the Pacers were loaded with skill position talent. The logjam has eased only slightly, but Swygard — who had a big JV season and is a standout on the basketball team — won’t be denied this fall.

Another casualty of the numbers game during the spring, King improved tremendously over the course of the season and would have gotten playing time in the second half of an ordinary season. Phillips also called him one of the team’s most beloved and funniest kids.

Burkeen cracked Wilsonville’s deep receiving corps in the spring, catching five passes in four games, and now he’ll join Lakeridge’s equally deep squad after transferring over the summer. “He is very shifty and quick and has a great mind for the game,” Phillips said.

Ferguson was one of the team’s highest-graded offensive linemen during the spring season and has taken on more of a leadership role this summer. “He is extremely bright, and I am expecting big things from him this year,” Phillips said.

Olund was asked to move to a new position during the spring, starting at offensive tackle and showing improvement with each game. Phillips described him as “a player that will play every snap with all of his bones broken for his teammates.”

The Pacers started the spring season on a tragic note after the suicide of teammate Ezekiel Crowder just days before the opener, but by the time the five weeks were done, Phillips — a former assistant coach with the Philadelphia Eagles — felt the team had bonded through the adversity and was now prepared for “the real deal” of the upcoming fall season.

He spent the summer emphasizing the importance of getting into the weight room. When he arrived in March 2020, he had only eight players show up for weight training; this summer, the numbers regularly averaged in the 40s.

“Truly incredible, the commitment and effort these boys have put in toward committing to one another,” he said.

For all their past commitment to the weight room and potential on the field, however, the Pacers have struggled to turn it into results. They’ve reached the quarterfinals twice in the past two decades and haven’t reached double digits in wins since their last semifinal appearance in 1994.

This year’s team, though, has the talent to end that streak.

Lakeridge should again have a potent passing attack, as befits a team coached by a former NFL quarterbacks coach, led again by Oliver, who had a 112.3 quarterback rating in his five-game debut as a sophomore starter. His top two receivers (Corbin and Olsen) return, but who steps in for Oliver’s brother Andrew as lead tailback remains a question mark.

Up front, Phillips hopes two youngsters — junior Will Stelk (6-1, 250) at center and sophomore Niles Bauer (6-3, 250) at tackle — can mesh with three returning starters on the offensive line. Bauer started playing football a couple of years ago, and Phillips believes he can become a breakthrough player this fall.

The defense will need to improve upon the 31 points per game it allowed in the spring. It has several building blocks to create the foundation of a stronger unit, led by Reichle, who was a revelation during the spring season, and Tovey, a force in the middle of the line.

The Pacers will look to make more game-changing plays on defense after finishing last season with only five sacks and six takeaways. Tovey and Waible were especially good at making negative plays (15 combined tackles for loss), but three of the team’s top pass rushers graduated.

“I want our players to enjoy every moment they have together. I think right now, there is so much pressure put on these kids to perform, to try to earn a scholarship. If they just focus on playing the game and enjoying it, all that other stuff takes care of itself. We have to coach and teach our players about being in the moment, because as you and I both know, we will blink, and the season will be over.” — Spencer Phillips