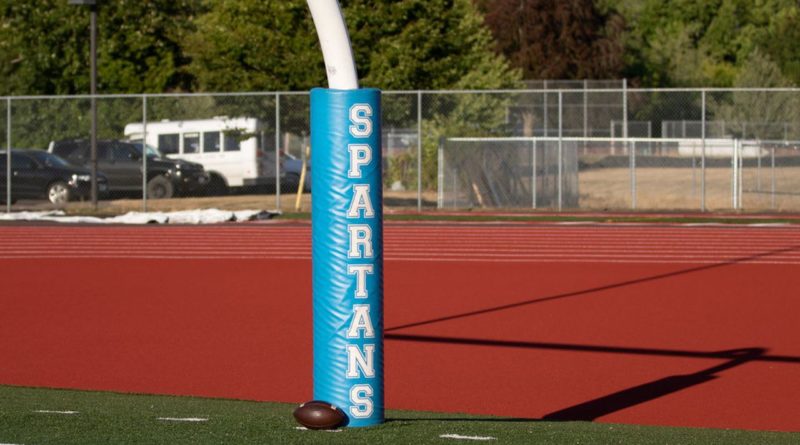 SBLive Oregon will break down every 6A, 5A and 4A team in the state leading up to the 2021 fall football season. Here’s our look at the Corvallis Spartans of the Class 5A Mid-Willamette Conference.

Steeves completed more than 70 percent of his passes during the spring season and improved his all-around play during the offseason. McGowan praised Steeves for his understanding of Corvallis’ offense. “It’s kind of like having a coach out there,” McGowan said. “Watching him, I can just tell that he’s got a lot of upside with his arm strength, accuracy and running ability.”

A returning multi-year starter on the line, Tucker is one of the leaders in the Spartans’ deep lineman room. “He’s the biggest guy we have, and he’s got really good feet,” McGowan said. “He’s just a big, strong guy and will definitely be an important piece for us.”

Crump played as a sophomore but took last season off. McGowan said Crump developed physically during his time away from the program. “We missed him and are glad he came back,” McGowan said. “He’s leaned up a bit, isn’t real tall but has a lot of strength and good feet.”

A smaller lineman at 5-foot-8 and 175 pounds, Abdullah shined last season at center while filling in for an injured Garrett Noss. Abdullah is likely to move to guard as a senior. “He’s a smaller guy but is really strong,” McGowan said. “He’s the kind of guy that will run through a brick wall for you.”

Wright can play multiple positions on offense and will get up in the box on defense. McGowan called Wright a “superb athlete” who is set up to have a big senior season. “He did track last year, and I think it really helped him,” McGowan said. “Carson is a very disciplined, hard-working guy who can be trouble for teams in space. He’s got good speed, good hands and has some physicality to him.”

Worsch is a crafty running back who excels at finding holes and getting tough yards. “He is a bigger version of (older brother) Garrett; he has the same toughness,” McGowan said. “He’s not going to be a speed demon out there, but he’s going to be solid for us.”

Pfister-Valdez got plenty of time in the defensive backfield in the spring and could make an impact at wide receiver as a senior. “He’s older and stronger and is probably going to play quite a bit on offense,” McGowan said. “He was kind of overshadowed last year by a couple seniors. He has a chance to be really good.”

Despite having just four seniors on the roster, Corvallis finished with a winning record during the spring season. The majority of the varsity team is back, and the program added about 25 freshmen — a strong number for the Spartans compared with the past few years.

“I think we’re going to rebound well from COVID, I really do,” McGowan said. “We have a pretty good-sized freshman class coming in that joined our workouts for the summer … and we only had four seniors last year, so our senior class will be bigger.

“Everyone seems to be motivated and ready to go.”

McGowan has been particularly impressed with the Spartans’ batch of returning linemen. Along with Abdullah, Crump and Tucker, Corvallis also brings back senior Deagan Copeland and juniors Caden McGowan and Garrett Noss.

“When you say how good you are going to be, you always start (on the line),” Coach McGowan said. “We do have a bit more depth on the line this year.”

The group of skill position players also is filled with numerous returnees. Steeves is an all-conference-caliber quarterback surrounded by multiple capable running backs and receivers. McGowan said Wright, one of the team’s fastest players, will move to receiver while senior Peyton Silbernagel takes over at A-back (slot).

“I think we will be really balanced overall,” McGowan said. “We lost two very good receivers, but I feel like our running game will be stronger. … Defensively, we are a little stronger, a little more seasoned.”

With experienced players at every position, McGowan believes the Spartans have the potential to be the surprise of the Mid-Willamette Conference. Corvallis hasn’t won a playoff game since 2014, a streak that could end this fall.

“I think potentially we could be right there with the best teams in the league,” the veteran coach said. “We start off with Sprague, so we’ll know right away how good we are. It’s a good test for these guys.”

“In our league, like always, there’s a lot of parity. We’ve been in the middle of the pack a lot, and I think we have a chance to definitely elevate from there depending on how well things come together.” — Chris McGowan