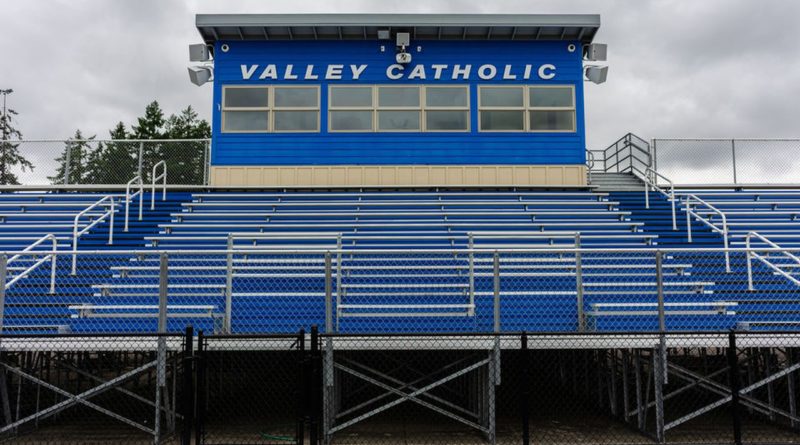 SBLive Oregon will break down every 6A, 5A and 4A team in the state leading up to the 2021 fall football season. Here’s our look at the Valley Catholic Valiants of the Class 4A Cowapa League.

This is Lane’s second year playing football, but he is such a talented athlete, with a great attitude, that he has been picked to be the starting quarterback. “He’s really starting to learn to play. He has picked up the offense really fast,” Snyder said. “His arm strength … he’s going to be able to stretch the field for us this year.”

The new head coach came up with a new nickname for Howes. “I call him Mr. Everything,” Snyder said. Howes can do it all. “We’re going to be giving him the ball in many different ways. I feel he’s going to have a major breakout season on both sides of the ball just because of how athletic he is,” the coach added.

Snyder said Moisant is up there with the most athletic players on the team. Moisant also is a “major leader.” He has really good hands and great potential. Snyder said he expects Moisant to get attention from colleges as the season progresses.

At 6-4, 245 pounds, Goodno is the biggest lineman on the roster. “For being big, he moves really well,” Snyder said. “He listens and learns things really fast, too. He has a good football IQ. He’s someone we are going to rely on.”

The most vocal leader on the team. Everyone knows when Williams has arrived. “He brings an energy to practice. The rest of the team feeds off of him,” Snyder said. “Probably our most physical player. I think he’s going to be our team leader for our defense this year.”

A 6-6, 225-pounder, Kinder is young, strong and ready to dominate. He played in the spring as a freshman. He did get injured, but he is back, ready for the fall. With Kinder and Goodno, the lines appear promising — in the present and the future. Kinder has “the highest IQ on the O-line for us,” Snyder said. “He asks a lot of questions because he wants to keep getting better.”

Rare for a freshman to make a coach’s list of players to watch. Rarer still for someone who has not played football. Farris, at 6-2, 225 pounds, showed up to practice and impressed everyone. A big-time basketball player, Farris could become a four-year starter on the football team. “He’s a guy we can build around because I see huge potential,” Snyder said.

OK, maybe don’t do that. But gotta love Snyder’s enthusiasm.

“I believe we are the best team,” he said before a long pause.

“Maybe we are not, but we’re going to go in confident and believe we can win any game.”

That is part of the battle at Valley Catholic, a football program with no winning tradition.

“My expectation is for the kids to have fun,” Snyder said.

And Snyder got a late start to heading up this process. An assistant head coach with Jefferson the past two seasons, Snyder was hired in July to be the Valiants’ head coach and has seen his team in only a handful of workouts.

The program has struggled through the years. Snyder wants to turn it around at Valley Catholic. It either helps, or hurts, that the Valiants are in one of the toughest leagues in the state, depending on your point of view.

“That’s one of the reasons I took this job,” Snyder said. “I love a challenge. I want to play against the best. I want to turn this into a powerhouse.”

This fall is the start of something new. Snyder loves his skill position players, and he has a few big guys to lean on for a few years. But he needs more depth. That will come, he says, in the future, when the program has a more positive culture.

“I’m super excited to see fans back in the stands. I’ve heard the student section at Valley Catholic is well known. They call themselves the Blue Crew. (This season) will be a good outlet for the kids to showcase all the hard work they’ve put in, something positive in their lives after so much negativity the last year or so.” — Michael Snyder