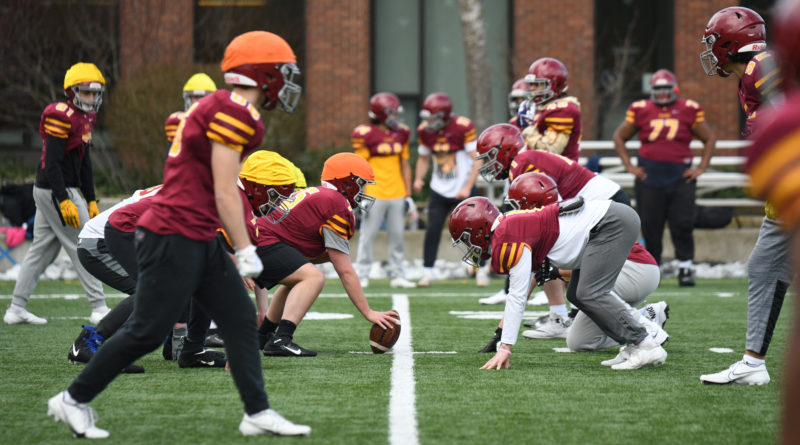 SBLive Oregon will break down every 6A, 5A and 4A team in the state leading up to the 2021 fall football season. Here’s our look at the Central Catholic Rams of the Class 6A Mt. Hood Conference.

The 6-foot-4, 205-pound King brings size, a physical element and dependable hands to the Rams’ passing game. In the six-game spring season, he had 28 receptions for 452 yards and seven touchdowns — the team leader (by far) in all three categories. Pyne characterized King, a fourth-year varsity player, as a great route runner with a selfless, team-first approach. “Barring something crazy, he should be a first-team all-state type of a player,” Pyne said. “He’s physical, a good point-of-attack blocker. He can go up and get balls. He has really, really steady hands. He’s pretty special.”

Grisham is a third-year varsity player with the versatility to do a lot of things and the talent to do them all well. In the spring season, he tied for second on the team in receiving and had the third-most carries. He had the second-most tackles on the team and had two interceptions. “He’s really athletic, a tough, all-in type of a kid,” Pyne said. “He’d play anywhere we asked him to play.” Grisham also figures to contribute on special teams as a kick returner.

Winston has made a nonbinding oral commitment to Oregon. The 6-4, 240-pounder is expected to be a force at outside linebacker, and he’s also ticketed to play some tight end. “He’s a really intelligent football player, a good leader,” Pyne said. “He’s very productive on defense in terms of executing his assignments, being physical at the point of attack, being able to make plays in the backfield with his pass rush and cover in space when needed.”

Pyne said Todd-Fields will be the team’s lockdown cornerback, but that shouldn’t diminish the offensive contributions he made in the spring. He caught the go-ahead touchdown pass in the fourth quarter of the Rams’ 14-7 win at Clackamas, a week after hauling in a scoring pass in a 21-7 win over Barlow. Pyne called him an instinctual player who has a chance to play at the next level. Until then, “We’ll put him on whoever we’re playing’s best receiver, just put him on an island,” Pyne said, “and let him do his thing.”

In the last three games of the spring season, Bynum totaled 30 carries for 320 yards, including 199 yards and two touchdowns on 10 rushes in the Rams’ finale at Sunset. Pyne referred to his strong finish and said, “I think he’ll be our No. 1 back if he continues to trend that way.” Pyne characterized Bynum as having explosiveness and good balance and being a hard, tough runner. “I really like what he brings to the table and how much he’s improved over the last couple of years,” Pyne said.

At running back, Jackson brings a slightly different look compared with Bynum. The 5-11, 190-pound Jackson will be counted on for picking up the tough yards and punishing defenses in goal-line situations. Jackson tied for the team lead last season with three rushing touchdowns. “He has phenomenal balance,” Pyne said. On defense, Jackson will provide depth at outside linebacker behind Winston and Riley Williams.

The mobile, powerful and persistent Schell started on both sides of the ball last season. He’s grown to about 6-4 and 245 pounds, Pyne said, but is still really athletic. “We’re looking for big things from him,” Pyne said.

Coyle (5-10, 200 pounds) is expected to start at an inside linebacker position and get some spot work on offense. Pyne calls him a good athlete, a great leader and a hard-nosed player who is expected to make his biggest impact on defense.

“He’ll be one of the anchors of our offensive line,” Pyne said. Cappalonga started most of last season’s games and is part of a large cohort of Central Catholic players with varsity experience. Pyne said Cappalonga, at 6-0 and 200 pounds, is “an offensive lineman stuck in a wrestler’s body.” The coach praised Cappalonga’s toughness, strength and athleticism.

Jones is another returner who reaped experience in the truncated spring season. Jones, now 6-5 and 320 pounds, started most of last season’s games on one side of the ball or the other.

Williams is probably the best-known player on the Rams among the college recruiting crowd. The 6-7, 235-pounder has, Pyne said, a dozen scholarship offers from across the country. Williams can line up at tight end and wide receiver on offense and at outside linebacker on defense. “You might see him at quarterback in some packages,” Pyne said, adding that Williams can run and pass. For all of the attention Williams has gained already, Pyne said there’s room for growth. “I imagine he’ll be vastly improved from last spring.”

Sanders figures to give opponents problems on both sides of the line of scrimmage. At 6-3 and 200 pounds, he’s a heavy hitter on defense from his inside linebacker/safety position. At wide receiver, he’ll defy opponents to keep up with him. “He’ll be a tough matchup just because of how well he runs,” Pyne said. The coach said Sanders isn’t a finished product as far as receiving mechanics, “but he’s certainly a threat to go deep and make something happen.”

It’s not too risky to predict that Central Catholic will contend for the Mt. Hood Conference championship and be playing deep into the OSAA Class 6A playoffs. The Rams of Southeast Portland were 5-1 in the spring, the loss coming in overtime to unbeaten Sunset. Central Catholic had seven seniors who received significant action in the spring, so plenty of experienced players return.

At quarterback, Luke Johnson got most of the playing time last season. He threw for multiple touchdowns in five of the team’s six games, totaling more than 1,200 passing yards and 15 touchdowns with a 66 percent completion mark as a junior. Cru Newman also received varsity experience in the spring as a freshman.

Two others are competing for the job. Senior Emerson Dennis has rejoined the team, and Niko May, a sophomore, has transferred from La Salle Prep of Milwaukie.

“We have, at least on paper, four guys who are going to compete for the job,” Pyne said. “We’re going to give them all opportunities with similar circumstances and see who shows the way. What we’re not going to do is play musical chairs with quarterback. We’re going to let the guy settle in and be the guy.”

Whoever wins the quarterback competition will have proven performers around him with King, Grisham, Bynum, Todd-Fields and others. The Rams also are looking for contributions from sophomores Matix Carpenter, a two-way lineman, and Timmy Mitchell, a wide receiver and defensive back.

Central Catholic’s recent past includes games in which simply outscoring the opponent — however many points it took — seemed to work fine. But the Rams’ points allowed last season showed steep improvement, from 20.1 points per game in 2019 to 13.2 in the spring. Central Catholic held three of its six opponents, including Jesuit and Clackamas, to season lows in scoring. A defense led by Winston and Williams should again prove difficult for opponents to pierce.

Pyne acknowledged the talent and the potential of this year’s team and said the course will be set by the players’ attitude and approach. Not every talented team, he said, has been aligned with the program’s process and principles.

“Success will be buy-in, in my opinion,” he said.

Challenges include adapting to changes in the team’s coaching staff. Charlie Landgraf takes over as the offensive line coach with Paul Kraus becoming the program’s head junior varsity coach. Pyne will call the plays on offense.

“I haven’t called a play when it mattered in probably 10 years,” he said, “so I’m going to have to knock off quite a bit of rust.”

“I think we have a lot of good pieces in the right spots.” — Steve Pyne