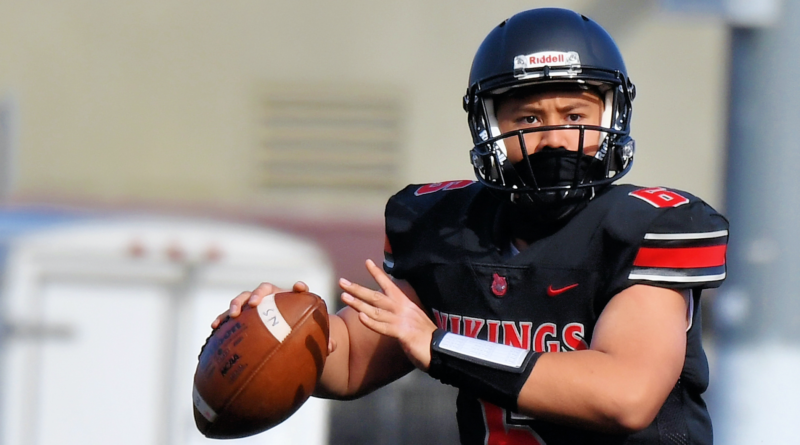 He made jaw-dropping plays as a high school freshman. He received a college offer from the Ducks when he was 14. But with the help of his Heisman-winning role model, the hard-working Manumaleuna remains focused on the here and now — even while those around him see the bright lights in his future.

So, there was a play in the fourth quarter against South Salem when TC tucked the ball and …

TC Manumaleuna II, then a freshman, was starting just the fourth game of his career when he led an 11-point fourth-quarter comeback to secure the Vikings’ win over South Salem in March’s Mayor’s Cup.

Sure, there was a 60-yard touchdown pass to begin the comeback, when Manumaleuna dropped a ball from the right hash into the hands of a streaking receiver down the left sideline. But the play that sticks with Flood came on North Salem’s next possession, down by a field goal, after his defense came up with a key interception.

After driving down the field, the Vikings faced a second-and-8 from South Salem’s 24-yard line with 2:13 to play. Manumaleuna took the snap, faked a handoff and rolled to his left. With no open receivers down field, Manumaleuna followed the lead of his blockers before tucking the ball and charging into the left end of the end zone for the go-ahead score.

“That’s one of those things, you never know if you can do it until you actually do it,” Flood said of his now 15-year-old quarterback. “And that was the moment that he realized that he could do this.”

To be frank, there’s been little doubt Manumaleuna could actually do this. He’s almost felt anointed in a way. He comes from a football family, with his uncle Brandon having played nine seasons in the NFL as a tight end and fullback. His first throwing lesson came with Marcus Mariota. He’s close with Clemson quarterback DJ Uiagalelei, he got an offer from the Ducks when he was 14 and, last month, Oregon freshman All-American linebacker Noah Sewell took to Twitter in a video “looking for some ballers to go play with my cousin.”

There are a lot of people, really good at this sport, in Manumaleuna’s camp who believe in his future. And Flood does, too. It’s just that he’s coached at North Salem since 2008 and last spring was the first time he’s started a freshman at quarterback in a varsity game. Even during offseason workouts when it became clear that, despite his age, Manumaleuna was the best quarterback on his roster, Flood still was a little curious to see how the transition to high school football would go.

“What we experienced last season as a team was a lot of growth and TC was at the center of that,” Flood said. “High school football is a lot different than playing youth or middle school football or even some of the high-level 7-on-7 he’s been doing. Friday night football is fast. It’s very physical, and it’s just a different sport than what those kids are used to.

“Our goal last year was to ease him in without putting too much on him, and he stepped up late in some games, which was really good to see. That’s the growth I saw. But he also has many steps to take before he gets to that level that everyone sees he’s going to get to.”

Nobody understands that better than Manumaleuna himself. Yes, he’s been plenty busy this summer touring places he might spend his future Saturdays. He’s been to USC and Washington, Ole Miss and Oregon, BYU and Utah, and is rapidly becoming an expert at interviews with the various recruiting sites. He’s polite and respectful, always turning the conversation toward the present. He said he’s picked that up from his role model, Mariota.

“Just seeing how he carried himself on and off the field, that’s the example I want to set for myself and how I carry myself,” Manumaleuna said.

“For me, I was anxious at the start of last season, but I just had to trust the process and be confident in the work that I put in. As a quarterback you have to lead the team, and I had a lot of older guys that have put their trust in me. So, I just have to lead and do my job.”

It wasn’t a perfect freshman season by any stretch of the imagination. The Vikings went 3-3, getting shut out in two of their losses, and Manumaleuna had a handful of throws he’d like back. But Flood said that’s all part of the process, one that has North Salem looking potent at quarterback heading into what should be a full fall season.

“He’s got this drive that I’ve never seen before. He practices all the time — with a smile on his face,” Flood said.

“I think the biggest step he needs to take this year is the ability to handle pressure. Game pressure. Pressure on every play. There’s a lot of people in your face when you’re playing quarterback, and just being able to do what you’re capable of doing when nobody is there, but with people there. Once he gets accustomed to that, I think he’s going to be able to take that next step.”

North Salem opens its season Sept. 3 against Roosevelt, and if everything goes right, Manumaleuna and the Vikings will play at least nine games. That would give Manumaleuna at least 15 high school starts before he’s even allowed to take an official college visit. And while Manumaleuna said his focus remains on improving as a player and teammate, he has pretty simple criteria for what he wants at the collegiate level.

“Any school that cares about me and where I feel loved,” Manumaleuna said. “Ultimately it just comes down to who wants me.”