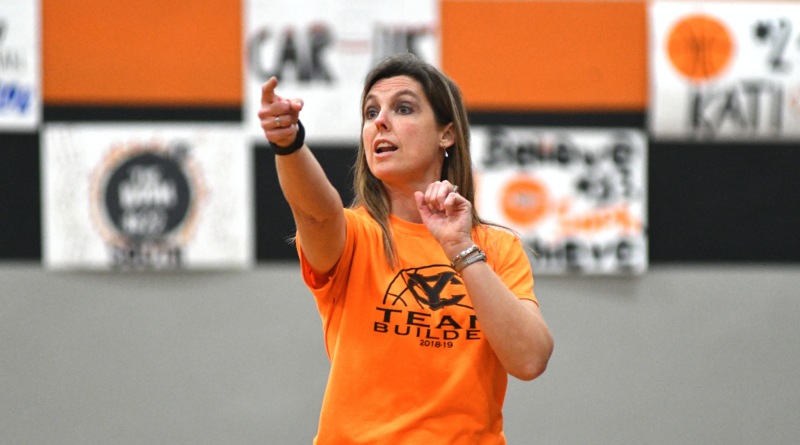 After coaching the Yamhill-Carlton boys to a 3A state title, Roberts has been hired to turn around the once-mighty Lincoln Cardinals of the PIL.

Three years ago, Heather Seely Roberts blazed a trail by becoming the first woman to coach a boys basketball program in Oregon in nearly eight decades when she took over a struggling Yamhill-Carlton program.

This week, less than two months after leading the Tigers to their first state title since 1992 by winning the 3A Showcase tournament in Coos Bay, she embarked down a new path after being named the head coach at Lincoln in Southwest Portland.

Roberts becomes the first woman to lead a Class 6A boys basketball program, and as she spent the past month discussing the position with Lincoln administrators, she recognized the significance of the moment.

“It carries a little bit of extra responsibility, some extra weight,” Roberts said Tuesday. “I was very happy at Y-C, and so as I was looking to make the jump, part of the process was wanting to put myself in a position to be successful. Coming in as the first woman, you don’t want to go 0-fer. I don’t want people to be able to say, ‘See, women can’t coach’.”

Anyone thinking a woman can’t coach a boys team hasn’t studied Roberts’ body of work the past three years since taking over a Yamhill-Carlton program that went 3-21 the season before her arrival. In her second season, the Tigers went 16-11 — their first winning campaign since 2006-07 — and this spring, they finished 13-4, capping the season with a 52-48 victory over Cascade Christian in the 3A title game.

In between, she spent the winter in Moab, Utah, with her twin sons, Moroni and Malachi, at Grand County High School, moving there after the OSAA postponed the basketball season until May.

She led the Red Devils to a 22-4 mark and a fifth-place finish at the Utah 3A state tournament. The tournament ended Feb. 27, and two days later, she was back at work at Yamhill-Carlton, which began in-person classes March 1.

“They probably will be the only kids to play at three high schools in one year,” Roberts said. “But I think the Utah experience gave the kids the confidence they’ll need to go to Lincoln. They saw they could go to a different school, make friends and fit in.”

Before coming to Yamhill-Carlton, Roberts won 266 games and made the playoffs 14 times in 17 seasons coaching girls teams at Ashland, Lakeridge, Canby and Sprague.

Moroni, who made the all-state first team in Utah and was 3A player of the year and an SBLive Oregon all-state second-team selection for all classifications in the spring, and Malachi (Utah second team, Oregon first team) will help Roberts as she looks to turn around a Lincoln program that has fallen on hard times the past few years.

As recently as 2018, the Cardinals advanced to the 6A state tournament, placing third at the Chiles Center with a 19-10 record. They’ve won 14 games the past three seasons combined, cratering to a 2-15 mark under Joel Lincoln in his only season after taking over for Pat Adelman during the pandemic.

“I would not have wanted to be a first-year coach during the pandemic,” Roberts said. “But if you look at Lincoln, they have a history of being successful. When I came to Y-C, it had been a while, and that first year, I had to spend a lot of time teaching the kids how to be competitive. So, it doesn’t bother me that they struggled last year. The challenge is figuring out how to get competitive in a league with so many talented players and getting the kids to buy into what we’re doing.”

Moroni averaged 29.3 points on 63 percent shooting to go with 12.4 rebounds, 2.5 assists and 2.5 steals during the spring season, while Malachi put up 15.2 points and seven rebounds per game. The opportunity to see how they fare against 6A competition was a factor in Roberts’ decision to make the move to Lincoln.

“They saw good competition at 3A, but the opportunity to play in the PIL will make them better players,” she said.

Lincoln opportunity has been weeks in the making

Roberts was first approached about the Lincoln opening over the July 4 weekend by Jeff Peeler, the former Lincoln athletic director who is now an assistant AD with the PIL. At the time, the Tigers still were playing in summer tournaments, but eventually, Roberts met with principal Peyton Chapman and athletic director Jessica Russell and liked what she heard.

“It took a lot of time and effort, praying about it and thinking about it, but then ultimately, I decided to go,” Roberts said.

The family will continue to live in Newberg, and they spent the past several days processing paperwork for Moroni and Malachi to be eligible at Lincoln. Roberts also wanted the chance to break the news to her former players before the announcement of her hiring was made.

She’s already heard from a couple of Lincoln players who reached out to her on social media, and she’s excited about the upcoming challenge.

“I’m not afraid of it,” she said. “Both at Utah and at Y-C, maybe it shocked the kids at first, but we never skipped a beat. They just accepted me as a coach.”