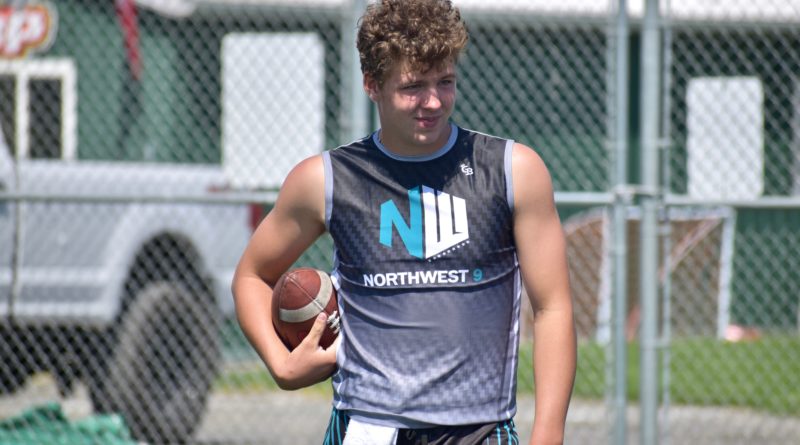 YAKIMA, Wash. – For the first two days of the Northwest 9 Showcase, Tualatin High School’s Jackson Jones was nearly flawless in all the various testing drills for quarterbacks.

And then he finished up with a bang – nearly a football field’s worth.

The final results in the class-of-2022 division won’t be finalized and released until Tuesday, but it was pretty obvious after the three-day event that Jones – in his showcase debut – will be at or near the top of the leaderboard, along with Graham-Kapowsin’s (Wash.) Joshua Wood.

“I don’t know if I can count on one hand the times either one of those guys missed on a throw,” said Taylor Barton, the Northwest 9 founder and chief organizer.

What Jones did not miss on was an opportunity to show off that strong arm in the event’s last individual competition at blustery Sozo Sports Complex.

In qualifying, the stocky dual threat airmailed a pass 64 yards into a headwind, which was tops.

Barton deliberately had the finalists made both of the attempts with a tailwind behind them. And Jones uncorked a throw of 77 yards.

“Both were pretty good throws,” Jones said. “The release on the 77-yarder felt so smooth off my arm.”

In any case, Jones’ recruiting profile stands to increase in a big way after his showing this weekend against best quarterbacks in the Northwest.

“I’ve put in a lot of work outside the camps, throwing four or five times a week,” Jones said. “This is definitely been a long time coming. I’ve been waiting for this competition since regional (qualifying).”

When asked which off-the-radar quarterback got his attention the most, Barton did not hesitate. “Reed Harris,” he said. “His life is going to change.” Harris was the first entrant ever from Montana, and the junior at Great Falls High School was the towering presence of the camp at 6-foot-4 and 190 pounds. Barton thinks he is a Power 5 athlete at the next level.