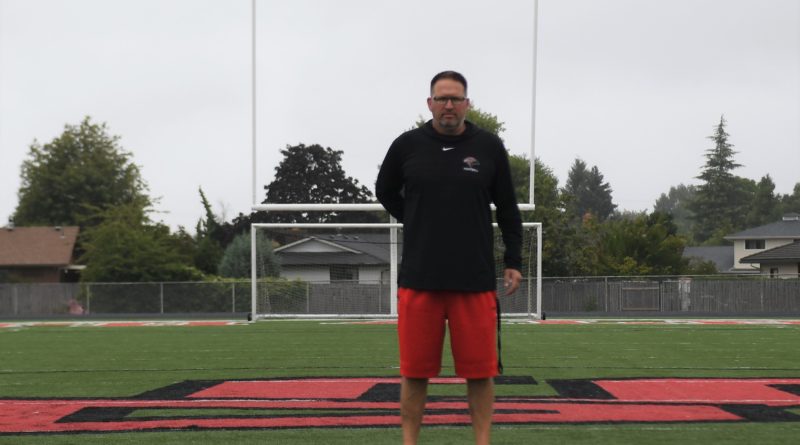 The South Albany football program is trying something different.

Instead of a traditional coaching hierarchy, the RedHawks will have co-head coaches this fall in Jeff Louber and David Younger.

Louber, a longtime assistant at South Albany and West Albany, took the reins from Younger after the 2019 season and led a youthful RedHawks team to an 0-6 spring record. Younger, South Albany’s head coach from 2013-19, spent last year as an assistant at Willamette University.

Louber will run the RedHawks’ defense while Younger, who compiled a 28-42 record with two Mid-Willamette Conference titles (2015, 2017) in his seven seasons at South Albany, handles the offense. Other duties will be split between the two.

“We are lockstep on the everyday operations of the team,” Louber said. “He is like a brother to me and we have a long history of coaching together.”

Younger and Louber, a South Albany graduate, worked together for two years on West Albany’s staff under head coach Randy Nyquist. Younger left to be Harrisburg’s head coach for the 2012 season and was offered the RedHawks job one year later. He poached Louber from the Bulldogs, and the two friends quickly turned around the South Albany program.

“Jeff was pretty instrumental in helping me get the South Albany job in 2013,” Younger said. “I just turned the defense over to him and felt very comfortable doing that. He’s a very good football coach and when he started at South, we were pretty much co-head coaches. It just worked out really well.”

Following a couple of 2-7 seasons in 2018-19, Younger resigned from his coaching position. Younger, who continued to teach physical education and health at South Albany, didn’t see eye to eye with then-Principal Nate Munoz.

“I’m pretty passionate as a football coach,” Younger said. “It’s something that I grew up absolutely loving. My mom died when I was 8 years old, I was a ball boy for Sweet Home and football became ‘it’ for me.

“I probably always put too much energy into my love of football, and my passion was seen as aggression by some people. I think that’s hard for some people to overlook when they don’t see you in the meeting room with the kids, they don’t know about the late-night texts when they really need something. We just had a different view of what we wanted the program to look like, and I was OK with that.”

Younger said he turned down a chance to be a head coach in the Portland area before the COVID-19 pandemic hit to avoid the long commute from Albany. A better opportunity presented itself a couple months later in nearby Salem.

Spending a year at the college level paid dividends for Younger, who singled out Parker and defensive coordinator Robert Tucker, now the head coach at Pasadena City College, for their knowledge of the game. Younger also learned a valuable lesson about building relationships.

“Every day the first few weeks of practice, we had time in the middle of practice where guys introduced themselves to teammates they hadn’t talked to yet,” Younger said. “It made sense because guys were from all over the Western US. When you’re a high school coach and you live in the same community, you think the kids automatically know each other, but they don’t necessarily. So, that’s something we’re going to do at South, make sure everyone knows their teammates and knows what they are about.”

Being away from the South Albany sideline last spring was a difficult experience for Younger. His oldest son, Kaden, was the team’s starting quarterback as a sophomore. Fans were not allowed at the games, forcing Younger to follow along through live streams.

After the season, Louber and new South Albany Principal John Hunter asked Younger if he’d return to the program as co-head coach. Younger officially accepted the offer in early July.

“It just felt right,” Younger said, “because my son was playing, and a lot of those kids were really close to me. My son, all of his buddies are football players. They come over to the house and I start talking with them … the pull to go back to the high school level definitely started then.

“There were some other open jobs in the area, and really I just had to look at what was best for my family. And what was best was getting back to South.”

Younger felt it was important to coach and teach at the same school. He also is excited to coach his sons, Kaden and Keaten (age 11).

“I had a great experience playing for my dad; that’s how I grew to love the game,” said Younger, whose dad, Rob Younger, won nine conference titles in 30 seasons as Sweet Home’s head coach and was recently a special teams coach for the RedHawks.

“Obviously I don’t expect my boys to have the same interests as I do, but they both grew up on the high school sideline, and that’s an experience that’s going to be valuable to them when they’re old. They see that teamwork, they see that accountability … those are important things that are going to pay off for them in adulthood. I’m really excited to be able to teach them those things through football.”

The new-look RedHawks will open the 2021 fall season Sept. 3 at Franklin.