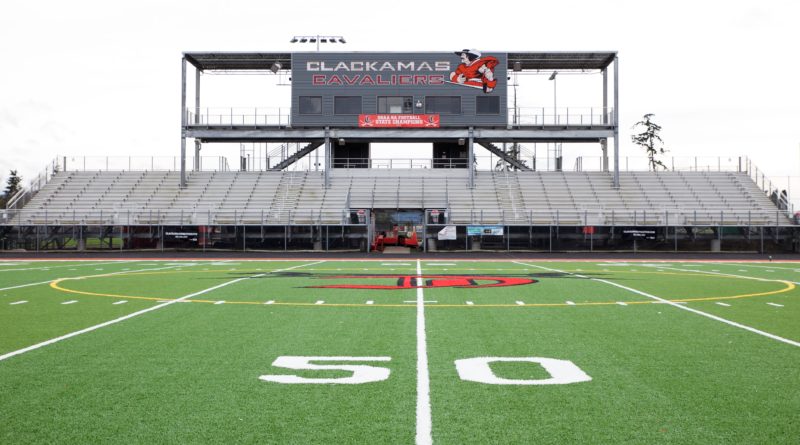 While the fledgling Hawks get to work building a winning culture, the established Cavaliers vow to just ‘keep on keeping on.’

The split of Clackamas High School this summer has one football program aiming to maintain a high bar of excellence while upstart Adrienne Nelson High is busy creating a culture of its own.

The North Clackamas School District responded to the rapid growth in Happy Valley by approving the transition of Rock Creek Middle School to Adrienne Nelson High, which opens its doors for the upcoming school year. The schools sit about 40 city blocks apart along Sunnyside Boulevard.

Seniors who fell outside the new boundary lines at Clackamas High were given the choice of finishing their prep careers as Cavaliers or making the move to the new school. Younger students simply will attend the school in their district.

“It has been up in the air for a while. We started seeing the boundary lines, and it slowly became more and more real,” Clackamas senior Noah Preuitt said.

Preuitt elected to return to Clackamas for his final year, while his younger brother Isaiah, a basketball player, is a sophomore across town at Nelson.

“It’s weird not to be in the same place, but I’m happy to be finishing up at the same school,” Noah said. “There’s a stability to staying in the same place. It’s rough to start out at a new school, especially when you are figuring out college plans.”

It was nearly unanimous for senior football players to remain at Clackamas.

“I didn’t want a repeat of my freshman year, getting used to new teachers and a new school. For most of our seniors it was not even a question,” Cavaliers lineman Logan Chastain said. “It’s weird to see some guys taken away, and we will miss those guys, but we’re going to keep on keeping on.”

In terms of turnout, Clackamas coach James Holan expects his numbers to drop by 30 or 40 players, mostly hitting the younger classes.

“Our senior class took the change and embraced it. We are learning to be a smaller program, but our expectations are still high,” Holan said. “Guys who thought they might be 3s are now 2s and they are learning what it is like to be one play from getting onto the field.”

Clackamas has a solid football tradition, quickly becoming Central Catholic’s biggest challenger in the MHC and turning in a perfect season on its way to the 2017 state title.

“We’re out here building that camaraderie right now,” Holan said. “You’ve gotta love this part of the season. This is what makes that 10 weeks in the fall that much better, knowing you have each other’s back.”

Meanwhile, the Nelson Hawks have hired former La Salle Prep coach Aaron Hazel to lead their football program. The school has installed a football field and track facility on the west end of campus.

“There’s a buzz and an excitement,” Hazel said. “It’s a chance to start a culture, and we don’t take that lightly. Twenty years from now, they can come back for homecoming and say, ‘We started that’.”

With a young roster, Hazel will be relying on many players who will be getting their first Friday night experience this fall.

“It’s a fresh start, and a chance to put your best foot forward,” Hazel said. “Especially for this junior group, they are excited about the chance to get out on the field and be counted on.”

The teams will meet for the first time in Week 4, when Nelson takes the short bus ride down Sunnyside to play on the Clackamas turf.

“These kids know each other already,” Hazel said. “We were just at a Clackamas summer baseball game, and they were all sitting together and you couldn’t tell who was who.”

Added Holan: “These guys have all been together before; no one wants to embarrass each other. It is possible for two high schools to both field good teams in the same town. At the end of the day, we want kids excited to play football.”