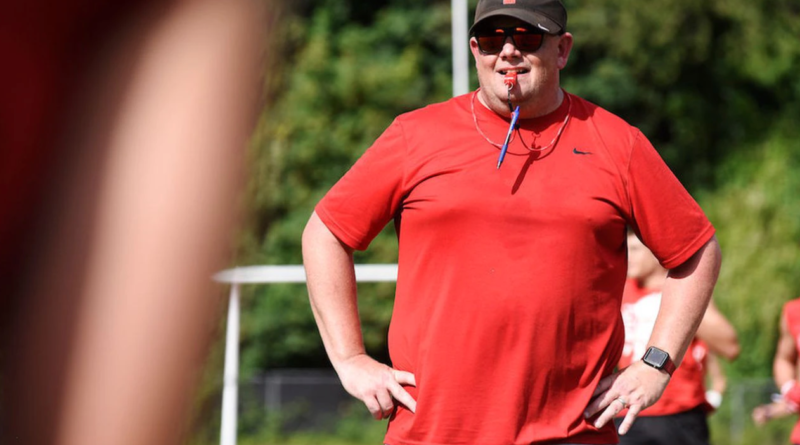 Two weeks ago, Dustin Janz and his family were preparing for a much-needed vacation at Sunriver before he started his new job as a physical education teacher at La Salle Preparatory in Milwaukie.

The former Oregon City head football coach had resigned following the Pioneers’ 0-5 spring season for just such occasions. With a 6-year-old daughter about ready to start playing sports of her own, Janz felt it was the right time to step away from the day-to-day grind of being a head coach that he’d gone through the past eight seasons, amassing a 30-45 record at Reynolds and Oregon City.

“The plan was to stay there at Oregon City and teach while also exploring my options,” Janz said.

The first option to pop up was the teaching position at La Salle Prep, a Class 5A school. Then, he talked with new Falcons coach Brian Martinek, who took over this spring from Aaron Hazel (now the coach at the new Adrienne Nelson High School in Clackamas), about joining Martinek’s staff as a coordinator.

That’s when La Salle Prep athletic director Chris George approached Janz about stepping into the breach after Martinek resigned suddenly this month because of a private family situation.

Janz needed a couple of days to discuss the offer with his wife, Megan, and decide whether he should accept the position. On July 23, he informed George he would take the job, and now his vacation includes doing prep work for another head coaching position.

“It’s been a crazy couple of weeks,” said Janz, who met briefly with the rest of the staff last Friday but had to wait on meeting with the players because of this week’s OSAA moratorium. “This was obviously not the plan for this year. I wanted to spend more time with my family. It wasn’t expected; it just felt like I fell into something pretty good.”

Janz takes over a La Salle Prep program that went 4-2 during the abbreviated spring season and graduated eight all-NWOC East selections, including quarterback Ryan Rosumny, the league’s offensive player of the year.

The cupboard is not completely bare, however. The Falcons return a couple of all-league receivers in seniors Ryan Peterson and Brody Crowley, who also earned recognition on defense, as well as sophomore Grant Ellison, a first-team tight end as a freshman.

Additionally, La Salle Prep has invested heavily in its athletic facilities in recent years, something Janz found attractive when considering the PE and weight training teaching position at the school.

“It’s going to be a challenge, because we’re rebuilding a little,” Janz said. “But we have some pieces that we’ll need to put together. It’ll be a different ramp-up to the season, but we’ll hit the ground running when I get back from vacation.”