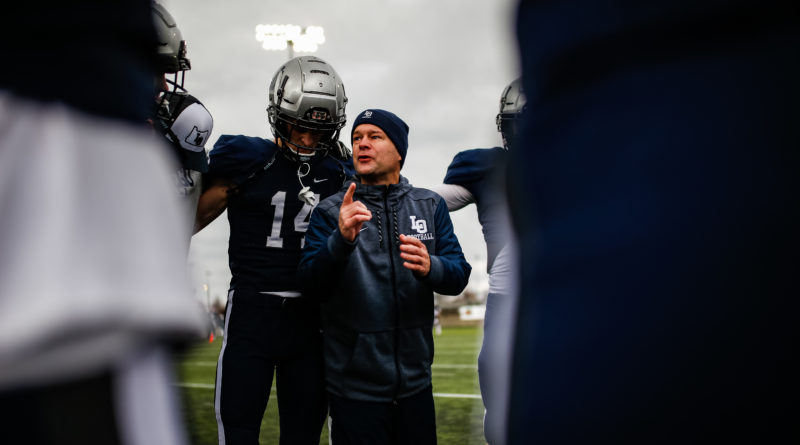 The Lake Oswego High School community slowly finds itself coming to terms with the jarring news it received Saturday afternoon of the sudden passing of longtime assistant football coach Brian Bartsch of natural causes at age 46.

Bartsch, who joined the Lakers coaching staff in 2004, most recently served as defensive coordinator and defensive backs coach. He died early Saturday, with Lakers head coach Steve Coury getting a phone call with the tragic news that afternoon.

“It has been a real struggle,” Coury said. “It’s a big-time blow to our program. We’re all walking around in a daze right now. He’s going to be really missed.”

Coury contacted players and staff around 4 p.m. Saturday and asked them to meet at the school later that evening so that he could deliver the news in person.

“This weekend was probably one of the longest weekends of our lives,” said senior quarterback Jack Layne. “Hearing the raw pain and devastation in not only Coach Coury’s voice but in the rest of the coaches’ as well really hit the hardest for me.”

The news gradually filtered to the rest of the Lakers community. Former standout Casey Filkins, a rising sophomore at Stanford, learned of Bartsch’s death from his family and said “it was a complete and utter shock. It’s been hard for me to come to terms with this news. I still don’t even know how to feel. I can’t explain it other than my heart just hurts.”

Filkins recalled receiving a text from Bartsch before the Cardinal’s game against Oregon last fall “and how fired up he was for me. He’s someone who has been in my corner forever. His heart was in everything he did. He placed the needs of his students and athletes above his own and was always someone I and many others could count on.”

Coury described his first meeting with Bartsch, brought about after another longtime Lakers assistant, Frank Everhart, recommended his former cornerback from the early 1990s at Lakeridge for a position on the staff.

“He instantly was one of us,” Coury said. “He was just an awesome fit.”

During his 16 seasons, Bartsch served as freshman and JV offensive coordinator, varsity running backs coach, JV defensive coordinator, and since 2009 as the JV head coach. He got started in coaching in part to follow in the footsteps of his grandfather, Jim Porter, who coached high school football in Oregon for more than 35 years and whom Bartsch called his idol in the 2020 Lakers media guide.

“My grandpa’s philosophy of using football as a tool to teach life lessons and to help mold young men is identical to Steve Coury’s,” Bartsch wrote in his media guide bio. “Coaching at Lake Oswego was a natural fit for me.”

Every offseason, when Coury would discuss head coaching openings with colleagues around the region, Coury wanted to promote Bartsch, but he knew his longtime assistant wanted to stay put.

“He would have been a great head coach, but he was never interested in leaving,” Coury said. “He wanted to stay right here, doing what we were doing.”

Early during Bartsch’s coaching career, Coury convinced Bartsch — who studied journalism at the University of Oregon and was working in real estate at the time — to “do what your heart says” and pursue his teaching credential. Bartsch enrolled at Concordia University, earning a master’s in teaching in 2008, and after starting his career at Waluga Junior High, moved over to Lake Oswego to teach physical education and health.

“Coach Bartsch was everyone’s favorite PE teacher,” Filkins said. “He not only made class enjoyable, but he also had this innate ability to relate to other students and help them with their fitness goals.”

“The impact he left on us kids, you almost can’t put into words,” Layne added. “He had a certain passion and essence about him that was inspiring. He truly loved what he did, and you could see that every day in how he treated us.”

Coury hasn’t begun to think about how to fill “the huge hole in our program” that Bartsch’s death leaves. He has talked with Bartsch’s girlfriend of six years, Susan Sullivan, and his family about holding a celebration of life in the coming days, but nothing has been planned.

With camp starting in about a month, the Lakers no doubt will find ways to honor their beloved coach throughout the 2021 season.

“I don’t think our team will ever be able to completely move on from this, but it’ll undoubtedly bring us closer than ever, if that’s even possible,” Layne said. “The news was a low blow and really hit us deep. With that said, we’ll beat this by getting back to work. That’s what Coach Bartsch would want. We are heartbroken, but it brings us peace knowing his passing and love will always be with us.”

Filkins had similar sentiments when thinking of the upcoming football season at Stanford.

“As painful as it is to know that he has passed, I know he will continue to watch over me and support me,” Filkins said. “I hope to make him proud.”