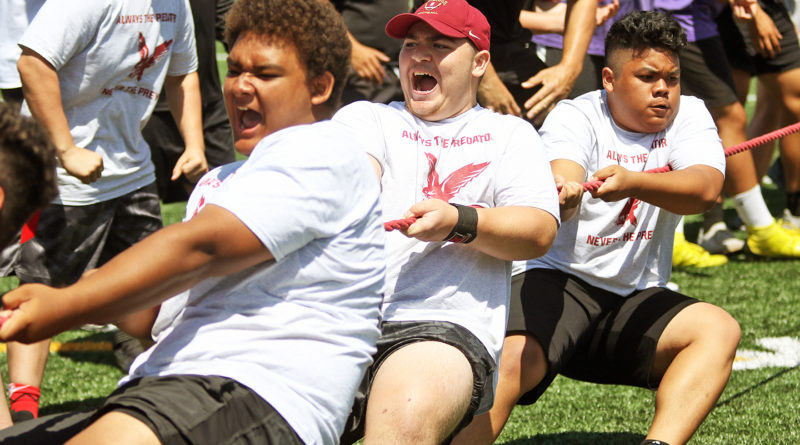 The competition was fierce.

No doubt about it.

But when football linemen get together, it’s about more than competition — it’s about brotherhood.

That brotherhood certainly seemed to be on display at the Metro Area Lineman Challenge, which was held Saturday at Hare Field in Hillsboro.

“It means a lot to us. With our linemen, it’s a brotherhood to get to come out here and just work our butts off,” Tualatin senior-to-be Jackson Biedritzky said. “It’s definitely special for us. There’s a lot of competition. I’d say it’s pretty darn special.”

Saturday’s Metro Area Lineman Challenge, founded and ran by Glencoe head coach Ian Reynoso, marked the 11th year of the event. Reynoso started the challenge when he was an assistant coach at Tualatin.

“When it all comes down to it, you can’t do a darn thing if you don’t have a line in front of you,” Reynoso said. “The linemen are the ones who are always quietly working in the weight room, pushing the weights, pushing the sleds and pushing each other around. But they don’t get a way to show it off. So, the purpose of this was to let them show it off a little bit.”

And the linemen, from all over, were happy to do just that.

“It’s really fun. Overall, I’m really enjoying the competitive environment,” Tigard senior-to-be Manny Wilder said. “We haven’t had something like this since my sophomore year. So, we’re seeing where we’re at, and the younger guys are seeing where they can grow from. It’s an opportunity to see where you are, knowing you still have time to improve.”

“It means a lot,” Tualatin junior-to-be Will Wilson said. “It helps us bond as a team, and it brings us together.”

Sunset, despite not having any competitors in the heavyweight division, earned the team title at Saturday’s competition with 71 points. Central Catholic was second with 53. Jesuit was third at 51, Tualatin was fourth with 45, and Southridge was fifth at 38. Hillsboro, which had just three individuals, as opposed to the eight competitors most teams had, placed 10th with a score of 14.

Jesuit’s Sylus Wallace finished second in the heavyweight individual standings. Wallace placed first in the farmer’s carry with a distance of 104 yards. He tied Southridge’s Ethan Sanft for first place in the tire flip with 11.

Jesuit’s Bennett Raymond had the top mark for heavyweight competitors in the shuttle run with a time of 4.74 seconds.

Aloha’s Tomas Salcedo was third in the overall lightweight standings. Central Catholic’s Luca Rodarte was fourth, and Grant’s Simon Porter, who won the tire flip with 13, was fifth.

Rodarte and his Central Catholic teammate, Francis Godlee-Campbell, tied for the top mark in the bench press in the lightweight division, each lifting 185 pounds 27 times.

Biedritzky had the top mark in the shuttle run with his time of 4.73. Wilson took first place in the vertical jump with a mark of 31 inches. He also took the top spot in the standing broad jump with a distance of 108 inches.

“It’s been going really good,” Wilson said with a smile. “This is really fun. I love being out here with these guys.”

While the individual achievements might be nice, for the linemen, it’s still about the competition and the brotherhood.

“It means family, coming together, showing that we’re here for each other and supporting each other,” Wilder said. “You work better as a team. You can’t do this by yourself. Football isn’t a one-man show. It’s a family time, it’s bonding, and I think everyone is just having fun.”

“It means a lot. Our O-line, we have a special bond,” Wilson said. “With our team, we need our O-line. These guys, they grind. It’s great to be out here with them.”

“Yeah, this is special. It’s really great to come out and compete like this. We want to do the best we can. That’s all you can do,” Beers said. “For me personally it’s extremely fun, and I’m noticing for everyone it’s extremely fun.”

“The whole point of starting this was to have events where everyone has to be together. Everyone has to be on the same page,” Reynoso said. “I love seeing people getting on each other and talking some trash, but then they turn around and encourage them, because they’re fighting. The competition is great, and when it’s done, we can still respect each other.”