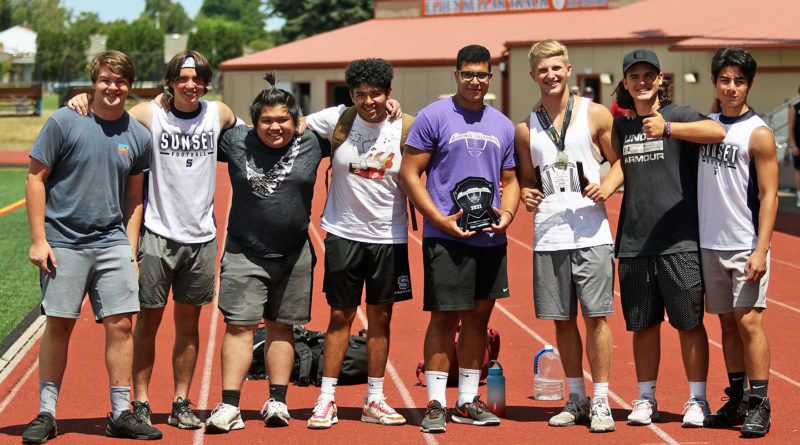 They weren’t the biggest team.

They weren’t the most imposing.

But they did the work, turned in a big effort, and they left with the championship trophy.

“It means a lot to us. We know that we’re smaller, but that doesn’t matter,” Sunset senior-to-be Padraig Owens said after the Apollos received the championship trophy. “It’s not about how big you are, it’s about how much heart you have. As a team, we have a lot of heart.”

“All of us are lightweights. We don’t have any heavyweights. But even though we’re undersized, this shows that we still have grit,” Sunset senior-to-be Mahmoud Abdelmoneum said. “The thing we value most, above all, is our toughness and team chemistry. I think that showed here. All the toughness events, we just powered through it. The farmer’s carry, we just dominate that kind of stuff. In the tug of war, we’re probably the smallest guys, but we beat some pretty good teams.”

Sunset claimed the team title with 71 points. Central Catholic finished second with 53. Jesuit was third with 51.

“This is so surprising, because we put this team together just three days ago,” Abdelmoneum said. “It was Thursday evening, and our coaches said, ‘Do you guys actually want to do this?’ We were like, ‘Yeah.’ So, (Sunset senior-to-be) John Ammerman, over here, he just puts together a team, on the spot.”

The Apollos seemed to make up for the late commitment with their team chemistry.

“We just work really well together,” Abdelmoneum said. “All of the team competitions, we have great chemistry. And Padraig is just super tough.”

Owens certainly seemed to prove that during the Metro Area Lineman Challenge. Owens earned lightweight MVP honors, while placing second overall, behind Glencoe’s Zack Schlottmann, who was the heavyweight MVP.

“It means a lot to me, because I’ve put a lot of work in,” Owens said of the lightweight MVP award. “It’s paid off, and I feel good about what I put in.”

Owens had the top 40-yard dash time of all the competitors, but maybe more impressive was his lightweight winning mark of 94 yards in the farmer’s carry, where he set off a Sunset celebration following his performance in that event.

“Last year, I got 80 yards, and the year before that, I got 81, so this year I really wanted to break my record and go all out, and I think I did that today, and I had a lot of fun doing it,” Owens said.

Owens also had strong marks in the shuttle run, where he had a time of 4.78 seconds, ranking third among all competitors, and in the vertical jump, where his leap of 28 inches was third-best on the day. His standing broad jump distance of 106 inches was the second-best mark of all competitors.

Abdelmoneum was second, behind Owens, in the lightweight final standings.

“My best event was probably the bench press,” he said.

Abdelmoneum benched 185 pounds 25 times, putting him in a tie for third place for all competitors.

Sunset’s Luke Rodgers finished in ninth place in the lightweight standings. He also had 11 tire flips to tie for second in the competition. The Apollos excelled at that event, as Sunset’s Anthony Perez and Jackson Santos each had 10 flips.

The Sunset squad, which also included Ammerman, Jackson Linehan and Nodh Waree, also shined in the team events. The Apollos took second place in the two-man sled relay with a time of 124 seconds. The undersized Sunset team finished in fourth place in the tug-of-war event.

“This was so fun,” Owens said. “I enjoyed it, that whole team enjoyed it. We had a blast cheering each other on, screaming in each other’s faces. There’s a lot of camaraderie between everyone.”

Sunset, coming off a revised 2021 spring season that saw the Apollos go 6-0, is hoping that the winning performance in the Metro Area Lineman Challenge is a good sign for the team in the upcoming 2021 fall season.

“I think, 100 percent, this is going to help give us momentum going into the fall,” Owens said.

Sunset is slated to open the season Sept. 3, when it faces Tigard in a nonleague contest at Tigard High School.