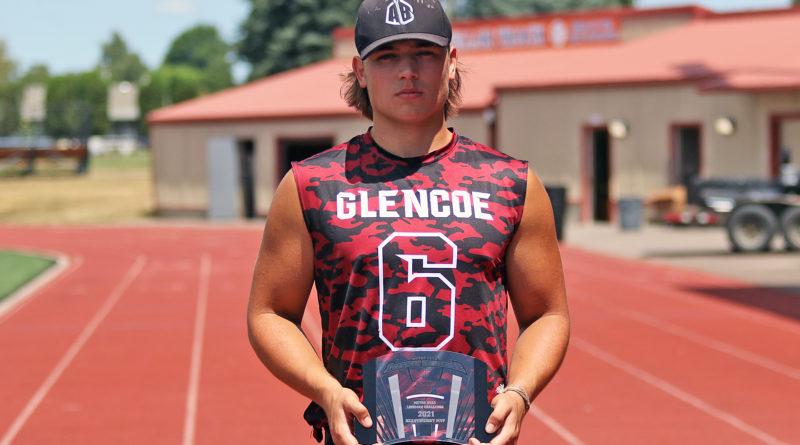 Zack Schlottmann is ready to make an impact.

The Glencoe senior-to-be is ready to make an impact on offense for the Crimson Tide football team this fall.

He’s ready to make an impact on defense.

He’s even ready to make an impact on special teams.

How ready is he? Well, Schlottmann showed just how prepared he is by turning in an impressive, dominating performance on his way to claiming overall MVP honors at the Metro Area Lineman Challenge, a competition that featured such events as the 40-yard dash, shuttle run, vertical jump, standing broad jump, bench press, farmer’s carry, tractor tire flip, two-man sled relay and team tug of war, held Saturday at Hare Field in Hillsboro.

“It means a lot to me, because it’s my first time being out here,” Schlottmann said after receiving his championship trophy. “I’ve only been a (defensive) end since last year. I moved from linebacker, so I gained a few pounds.”

The 6-foot-3 Schlottmann has bulked up to 230 pounds as he gets ready to play on the defensive line in the 2021 fall season, but that hasn’t seemed to slow him down, or weigh him down — as he showed during Saturday’s competition.

Schlottmann took first place in the heavyweight division in the vertical jump with a mark of 29 inches. He was first in the standing broad jump with a distance of 104, and he had the fastest time in the 40-yard dash.

“All of the agility events I was used to, because I’ve been to a couple of football camps this summer,” Schlottmann said.

But Schlottmann is about more than speed and agility. He also had the top mark in the heavyweight division in the bench press, lifting 185 pounds 25 times.

“That was pretty good,” Schlottmann said with a smile. “I’ve been dealing with a wrist injury, so I just taped it up and did just fine.”

Schlottmann also did nine tire flips, logged the weight 62 yards in the farmer’s carry, and had a time of 4.81 in the shuttle run.

“I’ve never really done that before,” Schlottmann said of the farmer’s carry and the tire flip. “It went pretty good.”

That might be an understatement, especially since this is the first time Schlottmann has competed in the Metro Area Lineman Challenge.

“This was my first time doing it, and I thought it was pretty good,” he said. “My head coach (Ian Reynoso) runs it, and it was pretty much what I expected. It was pretty fun. I also think this is very important. I think everyone focuses on the skill-position players. I feel like getting the linemen out here is important, because they’re a big part of our team.”

Glencoe, despite being a bit undermanned, finished in seventh place, out of 15 squads, in the team standings.

“We’re expecting 11 kids to show up, but we had just seven today,” Schlottmann said. “We had some younger kids, but they balled out. In the tug of war, we were just seven, going up against eight, but we still won against some pretty good teams.”

Spencer Krussman, a Glencoe sophomore-to-be, also had a strong performance at the Metro Area Lineman Challenge, as he finished in eighth place in the heavyweight ranks. Krussman had a team-best mark of 65 yards in the farmer’s carry, and he tied for team best with nine tire flips.

Schlottmann, who helped Glencoe go 3-3 in the revised 2021 spring season, is now looking forward to a big senior season with the Crimson Tide this fall.

“I think we’re going to do pretty good,” he said. “We’ve got some talent and some good young guys, and we’re showing up in the weight room. That’s very exciting to see.”

In addition to playing defensive end, Schlottmann will play tight end on offense, and he’s looking to be the team’s place-kicker. He booted a 50-yard field goal during workouts this summer.

“I just picked up kicking when I was out in the yard with my dad,” Schlottmann said. “I kicked the football, and he said I should try it, so we bought a tee and stuff. That started back when I was in fourth grade. We didn’t really have anyone (at Glencoe) when I started, so I just picked it up.”

Glencoe is scheduled to open the 2021 fall season Sept. 3, when it will play host to Sheldon in a nonleague game at Hare Field.

Schlottmann, in addition to being the overall MVP, also ranked first in the heavyweight division at the Metro Area Lineman Challenge. Sylus Wallace of Jesuit was second, Joe Merlino of Central Catholic was third, Southridge’s Ethan Sanft was fourth and Tigard’s Leif Beers finished fifth.