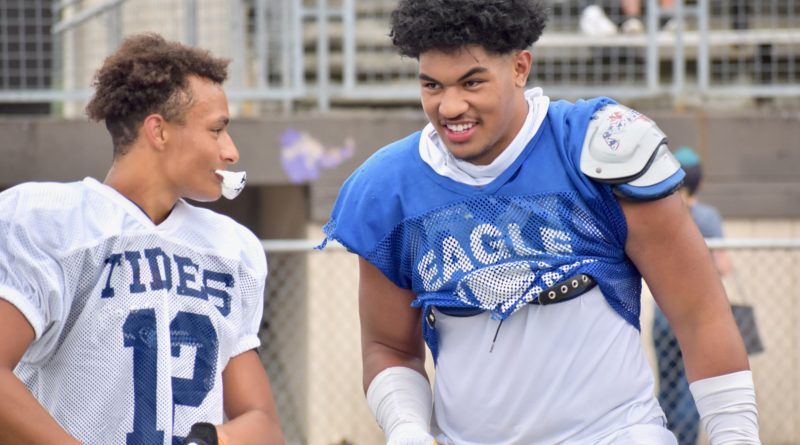 Andrew Savaiinaea has sprinted through the plains (Graham), motored around the plateau (Sammamish) and steered through the gorge (The Dalles, Oregon) as stops during his high school football career.

Needless to say, it’s difficult for the highly-touted class-of-2022 recruit to determine where home truly is.

But based on the sheer comfort he shows being around his new “old” team – Class 4A state favorite Graham-Kapowsin – it is easy to see this area could be at the top of his list.

“It’s the best spot I could be in right now at Graham-Kapowsin with all my guys from middle school,” Savaiinaea said.

The Eagles are glad to have him back, too. For one, he is a blue-chip addition to an already talent-rich roster, led by quarterback Joshua Wood, offensive tackle Vega Ioane, wide receiver Julian “Juice” Mason and the Hill brothers on both lines.

“He also fits with our kids. He’s known them for a long time. He hangs out with them.”

A recap of Savaiinaea’s journey: The Oregon native moved up to Pierce County in sixth grade, and played with many of his current teammates through middle school, and as a varsity regular as a ninth grader (in and out of the lineup because of a back injury) in 2018.

A year later, Savaiinaea transferred to Eastside Catholic, and was a defensive end as a sophomore on the Crusaders’ state-winning squad in Class 3A. He registered three sacks in seven games.

But after both of his parents lost their jobs when the COVID-19 pandemic hit in 2020, the family moved back to its native The Dalles, Oregon. That is where the 6-foot-4, 270-pound two-way standout played his junior season in the spring.

In April, his mother, Mary, got her job back with Alaska Airlines – and the family headed north a final time.

“We never wanted to leave (Washington) in the first place,” Savaiinaea said. “Just being up here, playing with these guys … this is the place where I wantd to be.”

Savaiinaea has stayed in constant contact with Wood, a close friend who is also a Ford Sports Performance teammate in the offseason.

It was at the Pylon 7on7 tournament in Las Vegas on the final weekend of April where Savaiinaea broke the news he was rejoining his original high school program.

On defense, Savaiinaea – who has nine NCAA Division I offers, including five from Pacific-12 Conference programs – will be part of rotation of seven players along the line. He is slated to start at weak-side rush end.

Could Savaiinaea be the lineup piece that pushes the Eagles over the top to win their first state title this fall?

“Obviously we hear all of that outside talk, and that is the goal,” Savaiinaea said. “But we try and keep that hype on the side, and just work on us. If we control what we can control, and grow as a team, we should be fine.”