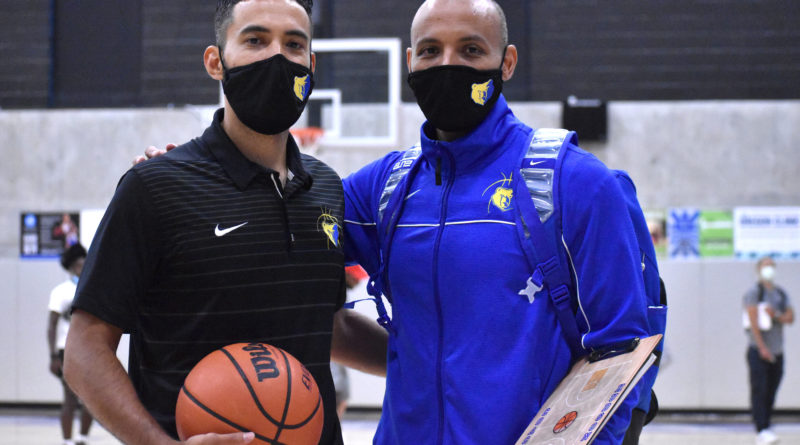 Brothers Marques and Nick Hudson enjoy a close connection — a sort of sibling symbiosis that has helped turn around the fortunes of the Barlow girls basketball program.

You see it on the bench, where they often sit side-by-side, hunched forward on the edge of their seats, both peering onto the court, searching for an advantage to give their team.

The communication is done as much with the eyes as it is with words. A clipboard comes out — Xs and Os, arrows and scribbles. A timeout. The plan is explained to the team, and typically a quick bucket ensues.

“We have that brotherly wavelength where we are thinking the same thing at the same moment,” Marques said.

“It’s a lot of small moments where we have an idea or draw up a play and just give each other that look, and we know we’re on the same page,” Nick said.

The brothers have been around basketball from the time they learned to walk. Their dad, Ron, a retired Physical Education teacher at Gordon Russell, spent most of his 30-plus-year career coaching middle school hoops.

“We have always been around the whistle and in the gym — basketball is in our blood,” Marques said.

Coaching was a natural next step for both boys.

Marques, a security officer at Gresham High, came on as an assistant coach on Mike Melton’s staff with the Gophers boys program.

That left the brothers on opposing benches in East County’s biggest rivalry game — a sort of torture for their parents, Ron and Angie, who would sit in neutral territory somewhere behind the scorer’s table.

“Growing up, we were always competing with each other. One brother would kick the other’s butt in the driveway, but afterward it was all love, win or lose, so we never thought of it as a big deal,” Nick said.

After several seasons, Marques switched gears and took on the head-coaching job with the Gresham girls program. After two seasons, and with his 40th birthday on the horizon, Marques stepped away from the sideline and was ready to simply be a basketball fan — or so he thought.

Now, it was Nick’s turn to switch gears.

“We had talked about coaching together in the past, so when he gave me the call to see if I was on board, I said, ‘You bet’,” Marques said. “That made our parents so happy — they didn’t have to go to any more Gresham-Barlow games and sit at half court.”

Already close, coaching together has given the brothers a common goal — chasing Ws.

“We’ll talk on our way to the parking lot after the game, then we’ll get in our cars and within a few minutes we’ll be talking on the phone — it’s always like, ‘Oh, and one more thing’,” Nick said.

“There are days when you have a long day at work, then you have to come ready to go to practice, but I’ve never had any of those since we’ve been together,” Marques said. “For me, I get to see my brother again, and I know we get to have fun for those two hours.”

Family gatherings often involve a meal and a basketball game playing on the television.

“We like to just hang out and relax. We’ll try not to bring up basketball. That usually lasts 15 or 20 minutes, then one of us will start talking about it,” Marques said, laughing.

The brothers share a mentality of freedom in their coaching, allowing their players to create opportunities — a style that has made Barlow the highest-scoring team in the Mt. Hood Conference the past two years.

“We want them to have a ‘next-play’ mentality,” Marques said. “It doesn’t matter what just happened. It’s all about getting on to the next play. It makes it easier to play if they aren’t worried about coming out of the game because of a mistake.”

“I try to be a green-light coach,” Nick said. “We want the girls to take good shots for them, and it’s our job to help them know what those shots look like.”

In their first season together, Barlow finished in the top half of the league and sported a winning record. The next season, the Bruins were Mt. Hood champions by way of a season sweep of Central Catholic.

During this most recent abbreviated season, they took second in the Mt. Hood, finished with a 13-4 record and reached the championship game of their culminating-week bracket.

The team highlighted its season with a nine-game win streak that included a 64-58 victory at Clackamas — the Cavaliers’ only league setback.

“We threw a lot at them late in the season, and the girls did a great job executing on the fly,” Nick said. “This is one of the hardest-working groups of girls I’ve been around — they are competitors.”

Nick knew Barlow basketball had something special coming when a group of sixth-graders came through his PE classes several years ago.

“It was rare to see a group of athletic girls who had such a love for basketball,” Nick said. “I remember thinking that the Barlow girls could be an exciting group to watch in a few years.”

Now sophomores, four players out of that group earned some level of all-league notice this past season, along with juniors Melanie Hiu and Lindsay Barden and senior Maicee Bradley.

“I give a ton of credit to the girls — they are out there working hard when no one is watching,” Marques said.

And the Bruins aren’t only focused on success over the next few years, but they are looking to that next group of sixth-graders coming up in the system. The team’s youth camp coincided with this year’s bracket games, meaning that Barlow’s players got up early to teach drills in the morning, went home for a short afternoon nap, then loaded up on the team bus for game night.

“It was one of the biggest highlights of the season, just to see the community come together,” Nick said. “It’s huge for those young girls to have role models. To them, I’m just some old guy — they all want to be like these high school kids.”

Barlow won 12 of its last 13 games before falling 55-48 to Lakeridge in the white bracket championship game. Despite the setback, Nick saw his greatest reward in coaching on the ride home.

“Our last game was a tough loss, but we got on the bus and within a few minutes you hear them joking and laughing,” Nick said. “That’s what it’s about — coming together as a group.”

The Bruins have become a top contender in the Mt. Hood Conference, but the Hudson brothers continue to search for that next step toward the summit.

“We are constantly looking at those upper-echelon teams and asking, ‘How do we get there?’ We aren’t at the top of the mountain yet,” Marques said.