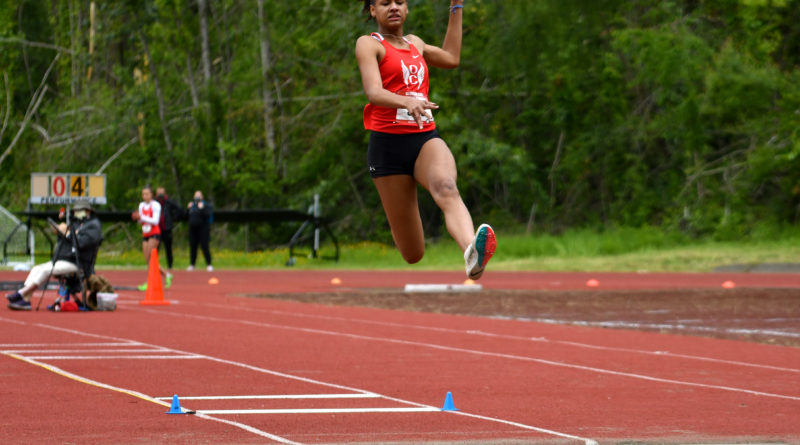 Oregon City rising junior Sophia Beckmon won a national long jump championship at historic Hayward Field on July 1 — and made a little history in doing so.

Beckmon jumped 6.05 meters on her final attempt of the competition, which converts to a state-record 19 feet, 10¼ inches, to best a field at The Outdoor Nationals that included 13-time Virginia state champion Jahnell Saunders, University of Michigan signee Riley Ammenhauser of Illinois and Houston Baptist signee Brianna Brand of Texas.

“It still is surprising to me,” Beckmon said Monday while traveling to Las Vegas for the AAU West Coast Junior Olympics meet. “I knew going into the meet that some of the girls had jumped 20 or 21 feet, so I was only hoping to place in the top six.”

Beckmon, who won the long jump at April’s Class 6A Track and Field Showcase, was in fifth place after the preliminaries and had fallen to seventh entering the final round.

“After the fifth round, when I saw I was in seventh place, I was determined to do something that would put me back in the top six,” Beckmon said. “That was my goal. I was not going to be in seventh place.”

Her coach wanted Beckmon to move her mark up a few inches for that final jump, but instead she moved her mark back a couple of steps “because I knew that I was about to run hard. That is the most angry I have ever been going down the runway.”

When she landed in the sand, not only had Beckmon taken the lead, she also had broken Michelle Reynolds’ 34-year state record of 19-10 set while she competed for Churchill in 1987.

Beckmon now has her sights set on becoming the first girl in state history to jump 20 feet legally. Three girls have done so wind-aided — Reynolds in 1988, Gresham’s Patty Baker in 1982 and Oregon City’s Karen Alcorn in 1986.

Beckmon was one of two Oregonians to win national titles over the Fourth of July weekend. Recent Summit graduate Kohana Nakato won the girls javelin on the first night of the meet with a throw of 51.55 meters, which converts to 169 feet, 1 inch, moving her to fourth place on the all-time state list (marks hit in summer meets before enrolling in college count for athletes who graduated from high school).

Gladstone incoming senior DeShanae Norman took eighth in the long jump and third in the high jump, one of five jumpers to clear 1.74 meters (5-8½).

Lake Oswego sophomore-to-be Mia Brahe-Pedersen, who broke the state’s freshman records in the 100 and 200 meters this spring, lowered her personal best in the 100 to 11.57 seconds in finishing fourth behind three seniors led by University of Oregon signee Jasmine Montgomery of San Antonio, Texas (11.44). Brahe-Pedersen placed eighth in the 200.