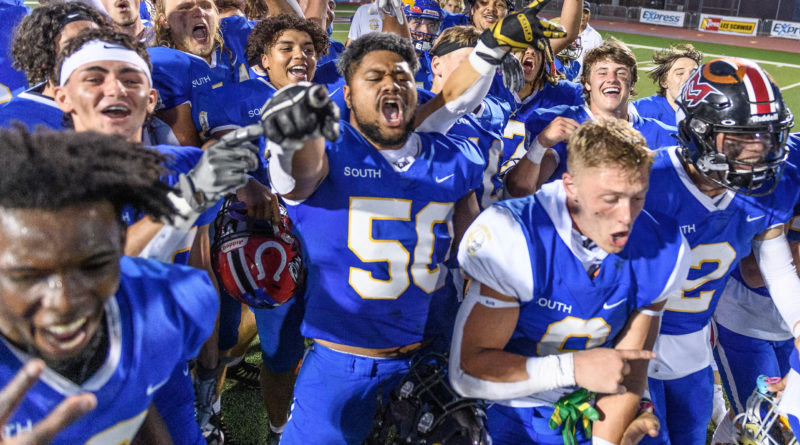 To be fair, it wasn’t just defense. As amazing as the South’s defense was, there were also some huge plays on offense, and plenty of motivation — wow, did the South have motivation.

The South team put that all together and powered its way to a 31-8 victory over the North in the 2021 Les Schwab Bowl, an all-star football game played Saturday in front of a large, enthusiastic crowd at Linfield University in McMinnville.

“It’s been something I’ve dreamed of my whole high school career, and when I found out that it could be a reality, and then (to) come out here and win it, too, it’s a really special thing,” said South defensive lineman Jackson Bailey, a 2021 Summit graduate who helped lead the defensive charge with two sacks and a forced fumble. “The South team is typically considered the underdog, and we felt that throughout the week. There was some disrespect flying around, so we just came out here and showed that we can play football.”

“It means a ton,” said South receiver Cole Brosterhous, a 2021 Mazama grad who was named the game’s Most Valuable Player. “We had a ton of small-school kids, and everyone was overlooking us. But everyone can play, even from the small schools. It doesn’t matter what classification you’re from … people need to start realizing that.”

“We came out to ball, and we had a chip on our shoulder, and we proved that football is football,” said South quarterback Jayden Wilson, a 2021 graduate of Class 2A Heppner. “It means a lot. A whole week getting to bond with everybody. I created a lot of bonds that will last a long time, and getting a win with them means the world.”

With the victory, coming in the 73rd game of the series, the South broke a tie and now leads the all-time series 35-34-4.

“It’s great. We got ahead in the series – Southside!” said 2021 Sprague grad Bryson Kievit, who was named the South Lineman of the Game. “All of these guys came out here, played with all their hearts, and we got the win, man. It’s unbelievable. It feels great.”

Kievit was one of many South players who shined on defense, as he had a tackle for a 4-yard loss to go with two quarterback hits.

The South defense came up with six sacks, four other tackles for loss, two fumble recoveries, two interceptions and a blocked field goal attempt. The only touchdown the North got came on a fumble return, when the South defense was on the sideline.

“The defense was great,” Kievit said. “We were all just riding together, and we played as a team. That’s what led to, what is in our eyes, getting a shutout.”

“We’re a close-knit group of guys,” Bailey said of the South defense. “To come in here, for one week, and do something like that is pretty special. I wouldn’t trade any of those guys for the world. It was awesome.”

“Our defense showed up,” Wilson said. “All week, they were giving us trouble. Now we know why.”

The North defense also was up to the task early, forcing the South to punt the first time it had the ball. But in its second possession, the South wouldn’t be denied.

Wilson started the 61-yard scoring drive with a 25-yard pass to Brosterhous. Devin Bradd, a 2021 North Medford grad, followed with a 16-yard run. Wilson made it three first downs in a row, completing a 12-yard pass to Crater grad Dawson Douglas, moving the ball to the North 8-yard line.

Two plays later, Bradd powered his way into the end zone. Douglas threw a 2-point conversion pass to Thurston senior-to-be Jacob Newell, giving the South an 8-0 lead with 5 minutes and 33 seconds left in the first quarter.

The South threatened again late in the opening period, as a 24-yard pass from quarterback Jakoby Moss, a Mountain View senior-to-be, to tight end TJ Zimmermann, a West Albany grad, put the ball on the North 16-yard line. But North linebacker Jack Bennison, a Central Catholic grad, recovered a South fumble on the first play of the second quarter, ending the drive.

It was the South defense that set up the next score, as Newell recovered a North fumbled punt at the North 17-yard line.

That led to an 18-yard touchdown pass from Moss to Brosterhous, coming on a third-and-goal play where Brosterhous went high to grab the ball in the left side of the end zone.

“I heard the play call, I knew I was going deep, and I was like, ‘I hope he throws it,’” Brosterhous said with a smile. “Then he threw it up, I saw the ball and had to go up and get it. Everyone was making plays when their number was called, so I had to do the same.”

Soren McKee, a Summit senior-to-be, added the extra point following the touchdown, upping the South lead to 15-0 with 4:35 before halftime.

North tried to respond right away. Jayce Knapp, a Wilsonville grad, completed three consecutive passes, including a 29-yard toss to Wells graduate Jayden Brannan and a 28-yard completion to Simpson, moving the ball to the South 18-yard line.

But, again, the South defense stepped up. Back-to-back sacks by Bailey and Thurston grad Kross Galago forced the North to punt, helping the South take its 15-0 lead to halftime.

The persistent North squad again tried to battle back to open the third quarter, moving the ball to the South 32-yard line, where it faced a fourth-and-3 situation. On fourth down, South linebacker Brycen Indell, a Willamette senior-to-be, made a tackle for a 2-yard loss.

The South defense kept the intensity the rest of the quarter, with Thurston grad Dawson Muggy blocking a 49-yard field goal attempt on the final play of the period, keeping the score 15-0 going to the fourth quarter.

McKee opened the scoring in the final period, kicking a 42-yard field goal to increase the South lead to 18-0 with 10:39 to play.

The South defense then came up with yet another big play, as defensive back Dane Sipos, a Lebanon grad, intercepted a North pass.

It looked like the South was going to capitalize on the turnover, as a 42-yard run by Thurston senior-to-be Gavin Knights helped move the ball to the 1-yard line.

But, on the next play, the North team got the big play it needed. The South fumbled the ball right at the goal line. North defensive back Timmy Mitchell, a Central Catholic sophomore-to-be, scooped the ball and sprinted 96 yards for a touchdown.

But the North wouldn’t be able to get any closer.

On the first play following an interception by Coquille senior-to-be Gunner Yates, Knights scored on a 40-yard run, making it 25-8 with 5:23 remaining.

On the next play from scrimmage, Bailey, who created havoc in the North backfield throughout the game, forced a fumble on a sack, with Thurston grad Jeremy Foss falling on the loose ball for yet another turnover.

“The forced fumble just kind of happened,” Bailey said. “It was a lucky situation, where he rolled out the other way and I got to hit him from behind, and it just popped out like that. And the sacks, I just got lucky, got around their big guys, put my head down and went.”

The turnover led to a 4-yard touchdown run by Yates on an inside handoff, coming with 2:56 left, wrapping up the 31-8 South victory.

“This was awesome,” Bailey said. “It’s been one of the best weeks of my life. The camaraderie — meeting all of these guys and making all of these new friends, it’s been a special week for all of us.”

“This was a lot of fun,” Wilson said. “I was happy to be invited, come out here and just play the game.”

“We got super close this week. It was a fun time,” Brosterhous said. “We got to know each other, and that family foundation is what made us come out and play for each other, instead of playing for ourselves.”

Brosterhous had seven catches for 88 yards and a touchdown, as he was named the game’s MVP.

“It means a ton. I was told that I was the first player from 4A to ever win it. It’s a big thing. Not many 4A kids, or lower, get invited to this, so I had to start a tradition,” Brosterhous said. “I’d say it’s one of the most fun football games I’ve been a part of, but I did win a state championship with the guys I played four years with at Mazama. But this is a close second.”

Wilson, who will play college football at Linfield, completed 12 of 18 pass attempts for 131 yards.

“I felt good, calm and comfortable, and ready to ball,” Wilson said. “Hopefully, this is the first of many wins on this field.”

Knights, who was named the South Back of the Game, led all rushers with 124 yards on 11 carries. Bradd added 55 yards on 12 carries.

Newell had four catches for 46 yards. Zimmermann had three grabs for 31 yards, and Douglas had two catches for 20 yards.

For the South defense, which limited the North to 226 yards of total offense, including just five rushing yards, Galago, Mountain View (Wash.) seniors-to-be Zak Gable and Alexis Plummer, and West Salem graduate Adrian McConnell each had a sack. Indell led the team with 11 total tackles.

“Everyone came together getting sacks, working hard together,” Kievit said.

“They were lights-out,” Brosterhous said of the South defense.

Simpson had a big game on offense for the North, gaining 122 yards on his 10 catches.

“I was in my zone. I was just focused,” Simpson said. “I didn’t want to drop anything. I was trying to win. But it is what it is.”

Jaekel completed 15 of 32 pass attempts for 112 yards. He also led the North with 16 rushing yards on five carries. Knapp completed 8 of 11 passes for 109 yards.

For the North defense, Bennison had a sack among his game-high 14 total tackles. Brady Kopetz, a Lincoln senior-to-be, also had a sack.

Despite the setback, players on the North team say they’ll still treasure the week and playing in the game.

“It was great. Meeting new people, people I didn’t know, and coming here and having a blast all week,” Mitchell said. “I got to play with the top guys, and it was great. They had my back, and I had their back. This will help me in the future, and I can teach other people, too, how it is to come here, be good and get better.”

“Bonding with my team, getting close to them. That was my favorite part,” Simpson said. “Everyone from all over Oregon came together and played this game. It was amazing. It’s tough that we didn’t win, but it is what it is.”

‘I don’t want to be anywhere else. I love it here.’ Kaanan Huffman represents undefeated West Linn at 2021 Les Schwab Bowl

Mountainside trio makes history as first Mavericks to play in Les Schwab Bowl: ‘I think we started the tradition’

From tiny Heppner (where?) to Les Schwab Bowl: Jayden Wilson will play all-star football game on his future college field