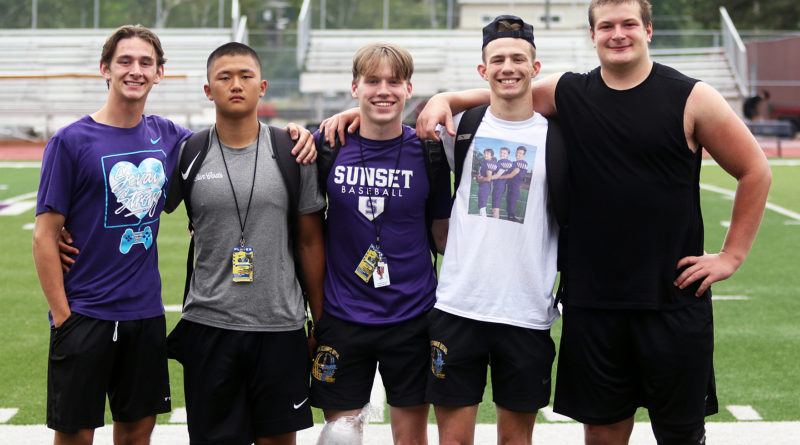 No doubt about it, for the Sunset High School football team, the revised 2021 spring season was nothing short of magical.

The Apollos went 6-0, finishing the season with a thrilling overtime win in a showdown with Central Catholic, helping them stake their claim as being the state’s top squad.

For five of those Sunset players, the magic hasn’t ended yet. They’ve got one more game, and they’re ready to make the most of it. Those five Apollos will get to share the field one more time when they play for the North squad at the 2021 Les Schwab Bowl on Saturday at Linfield University in McMinnville.

“It means a lot,” said 2021 Sunset graduate Kyle Jaekel, who is one of two quarterbacks on the North team. “Going into the season, we didn’t have the highest expectations. People didn’t know my name, people didn’t know our receivers’ names. We just proved them wrong. That says a lot about the Sunset program, and how we have grit. I think we have the most competitive team in the Metro, and I’m just super proud of everyone for making it.”

“It’s been a while since Sunset’s had this many players here, so that’s kinda cool,” said Sunset senior-to-be Chase Limbocker, who will be a defensive back for the North. “It means a lot to me. I never thought I’d make it here. … It’s pretty rewarding. I’m proud of myself.”

“It’s awesome,” said Sunset grad Nick Molitor, who also will play in the defensive backfield for the North. “It shows a lot about our coaching staff and our program as a whole. We tried hard this year. We worked hard in the weight room, we worked hard in the offseason. It showed up in the season and it’s showing up here. We got a lot of recognition, and it’s just awesome to be here.”

Joining Jaekel, Limbocker and Molitor on the North team will be Apollos senior-to-be Caleb Kim, who will play running back, and Sunset grad Liam Brown, who will be a lineman for the North squad.

“It means a lot to me,” Brown said. “Two of my brothers (Josh and Cody) also played in this game, and it gives me a bit of a feeling what college may feel like.”

The Sunset players are coming off a 2021 spring season that included a long-awaited (31-14) win over Jesuit and a season-ending 38-31 overtime victory over Central Catholic in a battle of unbeatens.

“It was such a great season. With all of these guys here, each had a huge part in it,” Kim said. “We have a great connection with one another, and that doesn’t happen that often. Our team chemistry and bonding are the key reasons that we went undefeated this season.”

“It was amazing,” Brown said. “I don’t think we’ve been this much of a single unit in years past, and I think that’s what got us the push to get us the undefeated season.”

“No one thought we were going to go 6-0, beating Jesuit for the first time in 28 years, beating Central Catholic in the last game in overtime. It was perfect. You couldn’t ask for anything more,” Jaekel said. “These are my brothers. I trust them with my life. I’ve always had this dream of being starting quarterback since third grade, and being invited here is just a dream come true.”

“I didn’t start playing football until my sophomore year, so I didn’t even think I’d get the chance to play,” he said. “When I got the call that I was invited, I was just really happy. It was awesome.”

Now, coming off the 6-0 season, the Sunset players want to add one more win.

While all of the Apollos players seem excited about the game, Jaekel, who will share the North quarterback duties with Wilsonville’s Jayce Knapp, might be the most enthusiastic of all.

“It’s a high honor. There have been so many great quarterbacks here,” Jaekel said. “Me and Jayce Knapp are a lot alike, and I think we’re going to do really good in the game on Saturday. We’re pretty balanced on offense. We’re going to keep them on their toes.”

“We want to send the three seniors off in a good way, with one more win,” Kim said.

In addition to the five Sunset players, Apollos head coach Damien Merrick is one of the assistant coaches for the North squad.