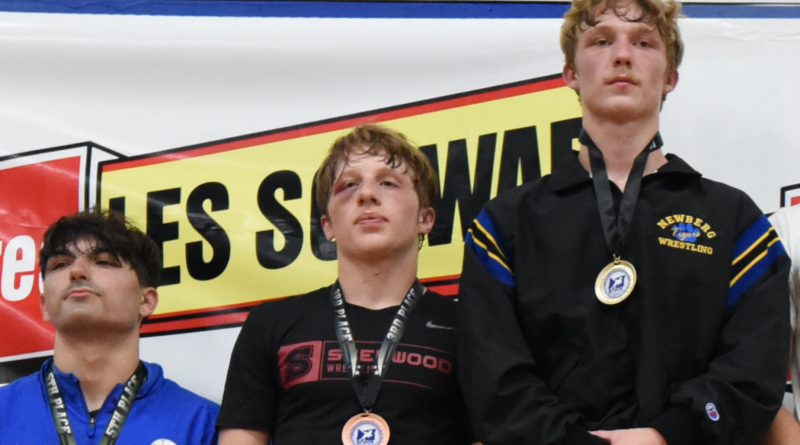 After dropping his first match of the tournament to No. 3 seed (and eventual finalist) Josh Camillo of Sprague, Jolley had to win seven consecutive matches over the next two days in stifling heat with little time between bouts to take home the third-place medal.

“I haven’t placed at state during my high school career, and to lose my first match, bounce back and win seven straight matches means a lot,” Jolley said.

Jolley faced only one real scare in the blood round, needing overtime to get past Grant sophomore Kai Tsugawa 3-1 to ensure he made the podium. He then beat Aloha’s Trevor McCoy 8-4 in the consolation semifinals and completed his run with a 9-5 decision over Newberg’s Patrick Negra.

Although the conditions were brutal, Jolley thought they worked in his favor as he worked his way through the consolation bracket.

“At Memorial Coliseum, the staging area is like 120 degrees, then you walk in the arena and it’s like 60 degrees,” Jolley said. “I actually liked it here more. Obviously, I couldn’t warm up before my matches, but I could get warm easily here.”

Philomath ended one of the longest trophy droughts in the state by placing fourth at the 4A state meet at Cascade. The Warriors hadn’t taken home hardware from a state tournament since winning the 1994 title. Sweet Home won its first title since 2017, with four individual champions helping the Huskies beat 2020 champion La Grande by almost 100 points. … Crescent Valley romped to its third consecutive 5A title, winning 11 of 14 weights en route to 364.5 points, almost double runner-up Thurston’s 196.5 total. … La Pine (3A) and Culver (2A/1A) returned to the top of the standings after one-year absences. It was the Bulldogs’ 13th state title in the 15 years that 2A/1A has contested a separate tournament.