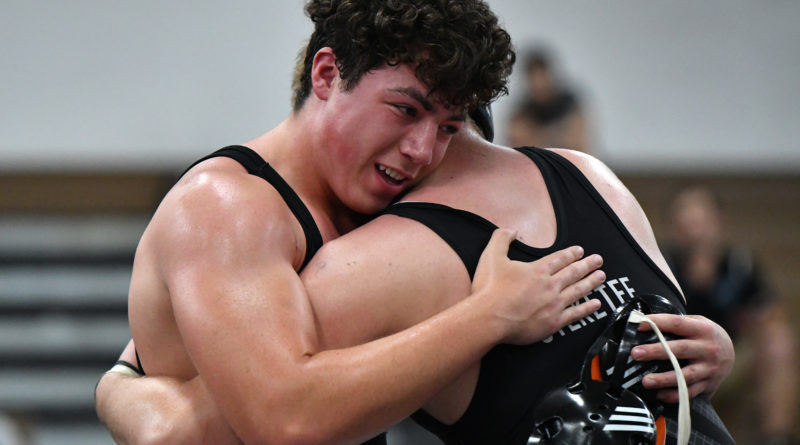 The first thing one noticed during the 220-pound final at Saturday’s Oregon Wrestling Association 6A State Championships in Newberg was the quiet.

All the sounds typically associated with a wrestling match evaporated in the heat, leaving an eerie silence as Sprague’s David Sherman and Cole Steketee battled for a title on the center mat.

Even the Olympians coaches, two in each corner, sat mute, watching the action unfold.

“We don’t say a word,” said Sprague coach Nolan Harris. “We don’t want it looking like we’re picking and choosing one of them. At the end, we’ll hug them both and say, ‘Good job.’ The kids understand. They know that. Besides, at that point, it’s all really up to them.”

In a rematch of the previous week’s Mountain Valley district final, Sherman came out on top again, defeating Steketee 4-0 for the Olympians’ fourth state title of the weekend.

“It’s definitely different,” said Sherman, a junior who didn’t qualify for state as a freshman and lost in the blood rounds last February. “But it’s something I got used to after it happened two weeks in a row.”

Philomath went 14 years between having a wrestler win a state title, but the Warriors busted through in a big way at the 4A championships at Cascade. Senior Connor Kohn pinned Siuslaw’s Christian Newlan in 1:35 to become the third Philomath titlist of the weekend, finishing the season 25-0 and joining Benjamin Hernandez (113) and Blaise Pindell (170) atop the podium, leading the Warriors to the fourth-place trophy. … Redmond senior Austin Carter, who missed the final month of last season, came back this spring to win the 5A title in Cottage Grove, defeating Vaun Halstead of Thurston 8-5 in the final.