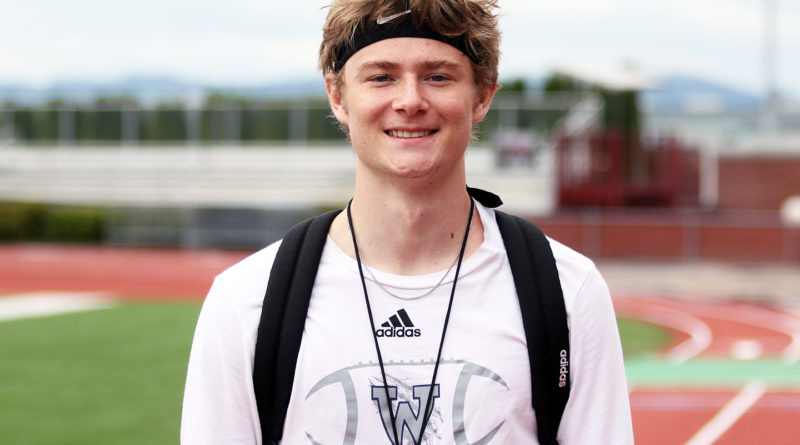 This past year, Jayce Knapp has been on quite a journey — a football journey.

It’s a journey that’s taken him from Wilsonville, to Texas, back to Wilsonville, and now to the Les Schwab Bowl.

“A lot of football for a lot of different teams this year,” said Knapp, who will play quarterback for the North team in Saturday’s game at Linfield University in McMinnville. “But the more football, the better. That’s what I love to do.”

And Knapp sure got to play a lot of football this past year.

“It was a very interesting journey,” Knapp said. “I actually transferred and played a season in Texas, where I played at Del Valle, which was Texas 6A, and we played really good competition, which I think prepared me well for this game.”

Knapp turned in a strong fall season at Del Valle, passing for 1,750 yards and 23 touchdowns.

But something just wasn’t quite right.

“I was at Wilsonville my freshman, sophomore and junior year, then I transferred for some family reasons, then I played down in Del Valle for that season,” Knapp said. “But I ended up back up here. It’s crazy. We moved down for my dad’s work, and then I was like, ‘I just need to go back home, it’s not my place, I just don’t feel like it’s home for me.’ Especially for my senior year, it was tough. So, I begged him to come back. We came back, I talked to the athletic director and, somehow, I got to play two seasons.”

That’s right, more football, as Wilsonville, like the rest of the state, played a 2021 spring season.

“It was a really cool experience. I was just ready to be a backup at Wilsonville,” Knapp said. “We had a junior, Chase Hix, who is going to be a great quarterback. I walked into the season, looking to be a starter, but then I was like, ‘I already got a season, I’m more than happy just being a backup. It’s his squad now.’ But he ended up going out with an injury. Obviously, I didn’t want to leave my teammates hanging, so I stepped in and tried to play my role the best I could.”

That said, the 6-foot-2, 185-pound Knapp helped the Wildcats put together a perfect 6-0 record.

“It was awesome,” Knapp said. “We had a good group of seniors, a good group of juniors and a few sophomores, and we all had our roles. We all knew what we had to do to be successful, and we just got it done. It also felt good to mix in some 6A teams in there and still go 6-0. That felt great. But it’s still a little sad that we didn’t get any playoffs, because we think we would have won it.”

Knapp was likely at his best in a 37-14 home win over Canby on April 2. In that game, Knapp completed 30 of 39 pass attempts for 388 yards and five touchdowns.

“That was a good game, especially because that was our rivalry game,” Knapp said. “It felt good to beat them, for sure.”

Now, it’s on to the 2021 Les Schwab Bowl, where Knapp will share North quarterback duties with Sunset’s Kyle Jaekel.

“It means a lot,” Knapp said of being selected for the all-star contest. “One of the people I looked up to was (former Wilsonville quarterback) Nate Overholt, and he played in this game, and it’s an honor to carry on the Wilsonville tradition and be in this game. And, also, I’ve already met some amazing people here that I know I’m going to be friends with for a long time. It’s been a great honor.”

Knapp, who is joined at the Les Schwab Bowl by Wilsonville teammates Colby Guenther, Jake Moore and Aaron Wilcox, is looking to end his high school football journey with a victory.

“We’re going to take the win,” he said with a smile. “We’ve got a great squad. The offensive line is looking great, the receivers are looking great. Me and Kyle have been on point. The defense has been giving us trouble in scrimmage time, so that’s good.”