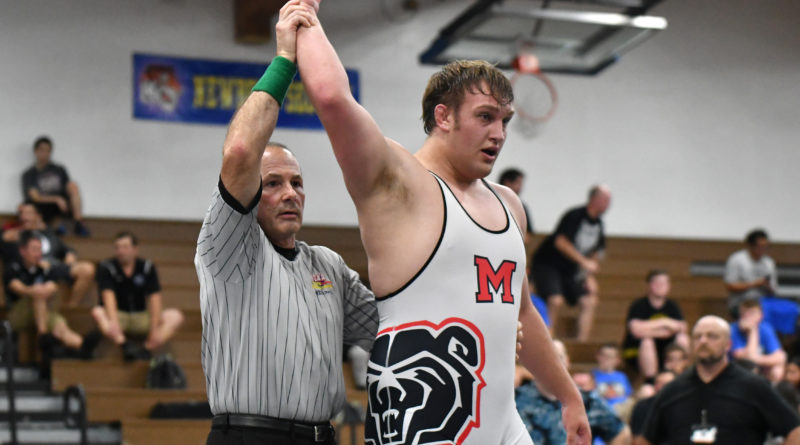 When McMinnville’s Jacob Barnes reached the semifinals at his first OSAA state wrestling tournament three years ago as a freshman, he declared, “I want to spend four years dominating the mats of Oregon.”

He did spend the next few years dominating not just mats throughout the state, but across the country as well. He won just about every title possible during his career, including a Greco-Roman national championship, four Pacific district titles and countless in-season tournaments.

The only accomplishment to have eluded the Grizzlies senior was winning a high school state championship. As a freshman, he lost to Oregon City’s Lane Marshall in the semifinals. The past two years, he entered state as the top seed, only to lose to Marshall (again in the semis) as a sophomore and to Century’s Broderick Reese in last year’s final.

Entering this shortened high school season, having already signed with Oregon State and nursing a bone bruise and bone chip in his left leg, Barnes worried that his lifelong dream of joining older brothers J.T. and Brian as state champions might never happen.

“I was just scared that I was going to get into a weird spot and hurt myself again,” Barnes said. “When my family and I found out what my injury was and how to treat it so I could wrestle, Coach (Micah) Houston said something about how awesome it is that I would be able to wrestle. Then, Coach (Jordan) Barich said that he knew if anyone could come back from something like this, it would be me.”

He returned to the mat in early June and entered last weekend’s Oregon Wrestling Association 6A State Championships at Newberg High School again as the No. 1 seed, with a 154-19 all-time record.

After pinning his first four opponents, there stood his old pal, Reese, across from him one final time.

Neither wrestler scored during a taut opening period. Barnes chose down to start the second and escaped quickly to take a 1-0 lead, and again, both wrestlers stalked each other to no avail.

The third round saw Reese choose the down position, and Barnes managed to ride him for the full two minutes, dodging a bullet when Reese nearly wriggled free with nine seconds left but was ruled to still be in the grasp as they fell out of bounds.

After Barnes had his hand raised in victory, a state champion at last, he grabbed Barich in a bear hug and took him down to the mat.

“That was absolutely not planned,” Barnes said. “He and Coach Houston have made the biggest impact on my wrestling life. No matter how bad it got over the years, from getting fifth as a freshman to getting pinned in the finals last year, they always knew I could win.

“They always believed in me, and I’m so happy to finally get one for them. This state title means the most to me out of anything else I’ve won. I grew up watching my brothers win state titles, and it means so much that I could win one for my parents and my coaches.”

All five state heavyweight champions were first-time winners, including three other seniors — Toledo’s Kenneth Johnson (2A/1A), Yamhill-Carlton’s Ethan Russell (3A) and Junction City’s Bryer Moore (4A). Only Riley Godek, a junior at Crescent Valley who edged Silverton senior Owen Magill 3-2 in the 5A final in Cottage Grove, will be back next year to defend his title.