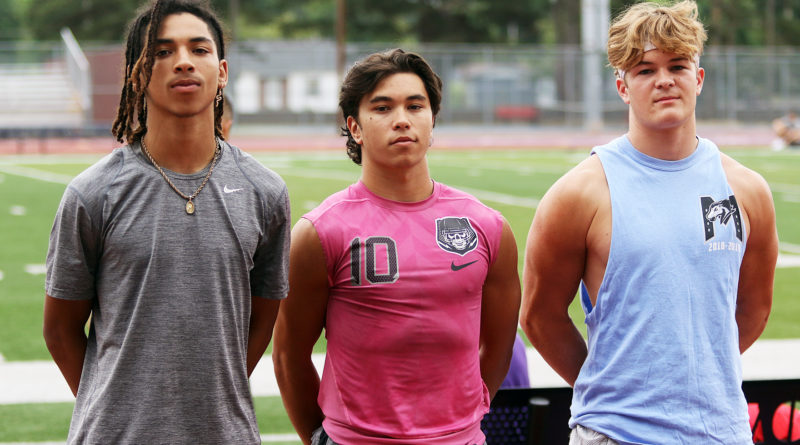 It could be said that they’re making history.

But Justin Hughes, Landon Sherman and Andrew Simpson aren’t only looking at it that way.

Instead, they’re looking at it as history and the start of a tradition — a tradition they hope will go on for a long, long time.

Hughes, Sherman and Simpson, all 2021 Mountainside High School graduates, will become the first Mavericks to play in the Les Schwab Bowl all-star football game when they take the field for the North team for the 2021 contest, which will be held Saturday at Linfield University in McMinnville.

“It feels great,” said Simpson, who will play receiver for the North squad. “But I feel like there’s going to be a lot more Mountainside kids here. I think we started the tradition.”

“It means a lot,” said Sherman, who will play outside linebacker. “It has a lot to do with our great coaching staff over at Mountainside, Coach (John) Mannion, Coach (Grant) Piros, all those guys. They’ve been great. I think there’s going to be a lot more of us coming soon.”

“It’s a huge honor, coming from a brand-new school,” Hughes said, referring to the fact that Mountainside opened its doors in the fall of 2017, with just freshmen and sophomores attending at that point. “Nobody thought we were going to be anything but an average school, but I think we prevailed and showed everyone what we can do, and I think we have some of the top players in the state, and we’re here now.”

Hughes, Sherman and Simpson were three-year starters for the Mavericks. They’ve seen the team grow throughout those years.

“It’s a lot of history,” said Hughes, who will play receiver in Saturday’s game. “A couple of us played together for years and years, but others were just random guys that we didn’t know, so we really had to come together as a team. We learned and grew together. It was just an awesome experience.”

The trio was part of the 2019 team that put together what could be called a surprising postseason run, beating top-seeded Tigard on its way to reaching the quarterfinal round of the Class 6A state playoffs.

This past spring, Mountainside went 3-3, with the losses coming to Sunset, Jesuit and Newberg.

“We had a pretty good season,” Simpson said. “We could have done better, but it was pretty good overall. We taught the young guys a lot of stuff.”

All three Mavericks are moving on to play football at the collegiate level. Hughes and Simpson will play at Western Oregon University, and Sherman will play at the University of Puget Sound in Tacoma, Wash.

“Hopefully, I’ll get a couple turnovers, a few tackles,” Sherman said with a smile. “Winning is a huge thing. You have to have the bragging rights.”

“I’m excited to play,” Simpson said. “I’ve been waiting all week for this.”