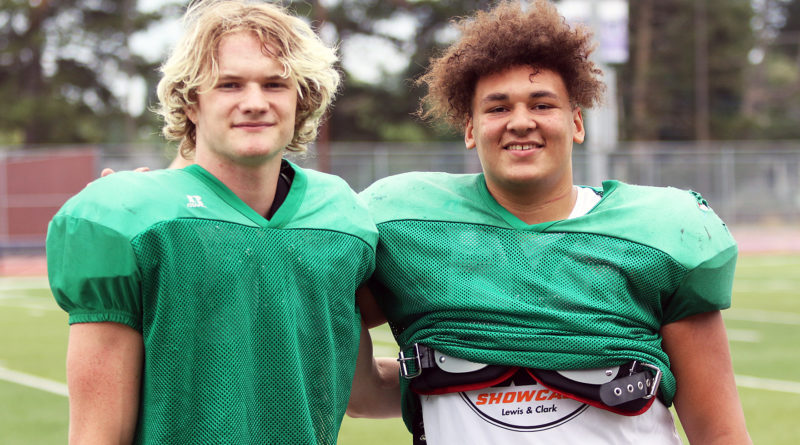 For many years, the all-star football game included only players from Oregon. But this year, the event will include a couple of players from Mountain View High School in Vancouver, Wash.

And here’s where things get a bit confusing: Even though the two Thunder players, Mountain View seniors-to-be Zak Gable and Alexis Plummer, competed for the northern-most school represented in this year’s game, they’ll be playing for the South squad in the contest that will be held Saturday at Linfield College in McMinnville.

But that makes no difference to Gable and Plummer — they’re just happy they get the chance to play in the game.

“I think it’s pretty cool,” said Gable, who will play linebacker for the South team. “Going into my senior year of high school, with my coach reaching out and suggesting me, makes me feel pretty good.”

“It makes me feel a little special that our coach asked us to come play in this game,” said Plummer, who will play on the defensive line. “I’m excited about it.”

Gable and Plummer are coming off a spring season during which they helped the Thunder win the 3A Greater St. Helens League championship at 4-0 (5-2 overall).

“We had a pretty good season. We were league champs,” Plummer said. “We had an eight-year league title streak, but we lost it last year, so it was good to get it back.”

Gable, while listed at linebacker for Saturday’s game, had a strong year at running back for Mountain View. For the seven-game season, he carried the ball 58 times for 404 yards (a 7.0 yards-per-carry average) with four rushing touchdowns.

“We had a pretty good season,” Gable said. “We won league. We had some good games.”

That likely led to the invitation to the Les Schwab Bowl.

“I got emailed, actually (Zak) got emailed first, then I got an email a week later,” Plummer said. “I was super excited to get to play in an all-star game. It’s my first time getting to do something like this.”

When Gable and Plummer arrived at Linfield, they were met by teammates who were all total strangers to them. But it didn’t stay that way for long.

“Everyone here is really positive and nice and super open to meeting new people,” Gable said.

When it comes to football, Gable sees no difference between Washington and Oregon.

“Football is football,” he said.

And, of course, that means working hard to get a victory.

“Getting a win is the first priority,” Plummer said.