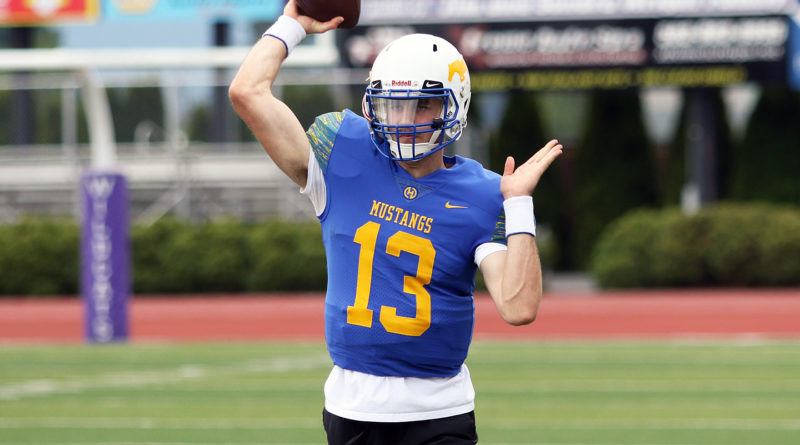 When Jayden Wilson met his new teammates on the South squad, there’s one question he had to answer over and over again — just where the heck is Heppner?

“Oh yeah, I’ve had to tell just about everybody,” Wilson said with a laugh following a South team practice Wednesday. “But it’s nice. It’s nice to meet these guys and make new connections.”

By the way, the answer is that Heppner is located in the northeast part of Oregon, west of Pilot Rock and east of Condon.

Now, many more will likely find out, as Wilson will be one of the quarterbacks, along with Mountain View’s Jacoby Moss, for the South team at the 2021 Les Schwab Bowl, which will be held Saturday at Linfield University in McMinnville.

“It’s truly a blessing to be here and given this opportunity. I’m only a (Class) 2A kid,” Wilson said. “It means a lot, representing Heppner, and No. 13.”

The 6-foot-5, 215-pound Wilson, wearing No. 13, helped lead the Mustangs to a 13-0 record and the Class 2A state championship in 2019. In the title game, Heppner defeated top-seeded Kennedy 12-7. Wilson scored both Mustangs touchdowns, one on a 56-yard run, the other on a 2-yard run. For the game, he rushed for 84 yards on 13 carries and completed 6 of 13 pass attempts for 79 yards. Oh yeah, he also had two tackles and broke up two passes on defense.

“Ever since I’ve been in eighth grade, my classmates and I created a bond with each other, and we’ve played to the best of our ability,” Wilson said. “In seventh grade, we went undefeated, and in eighth grade, we only lost our final game, so we knew we could do good things in high school. We got in the weight room, got on the field and started working hard.”

That hard work carried over to the games. And, at a smaller school like Heppner, that meant rarely getting a break.

“I didn’t come out for anything, really,” Wilson said. “Kickoff was the only thing.”

That will change in the future, as Wilson will play college football at Linfield University.

“It’s nice to get used to the lay of the land,” Wilson said of his Les Schwab Bowl time at Linfield. “It’s really nice, I love the field, the environment, the coaches.”

Before playing college football at Linfield, Wilson will be looking to prove a point in his final high school game, which, of course, will be played at Linfield.

“I want to come out and ball, show everyone what 2A means. Football is football, regardless,” he said.