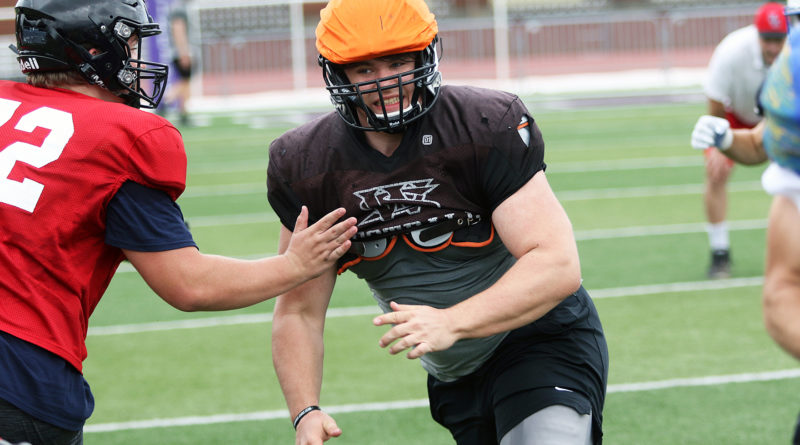 As a first impression, Adrian McConnell might come across as being a little bit quiet and soft-spoken.

But as West Salem’s opponents found out this spring, you can’t let first impressions fool you.

McConnell, a 2021 West Salem graduate and a powerhouse defensive lineman for the Titans football squad, caused havoc in the opposition’s backfield all season, helping West Salem put together a perfect 6-0 record in the shortened 2021 season.

Now, McConnell will be looking to cause more havoc Saturday. He’ll play for the South team in the 2021 Les Schwab Bowl, an all-star football contest which will be played at Linfield University in McMinnville.

“It means a lot. It’s the last true experience of high school football, getting to play against all the talent we didn’t get to in this shortened season, especially the upper Portland area,” McConnell said following a South practice Wednesday. “It’s going to be a fun experience, because how much football runs in southern Oregon, and now we get to play against the bigger schools and all of those kids.”

McConnell insists that he, and the rest of the South team, will be plenty motivated for Saturday’s game.

“We’ve got a little chip on our shoulder,” McConnell said with a laugh. “A lot of these guys come from smaller schools, and they’re ready. So, yeah, I’m excited.”

McConnell produced plenty of energy on defense for West Salem this spring. He led Class 6A with 8.5 sacks and 13 tackles for loss. McConnell had two key second-half sacks for the Titans in their season-ending 35-21 win at Sprague in a battle of unbeatens, with the unofficial Salem city title at stake.

McConnell is the only West Salem representative for the game, but that’s not going to stop him from having fun — and getting fired up for the contest.

“When I first got here, it was like, ‘Yeah, it’s going to be a fun last game,’” McConnell said. “But now I’m more amped for the game, getting ready to compete against the North.”

As for the future, McConnell is planning on playing next season at Maricopa Junior College in Mesa, Ariz.

“I’m going to go play (junior college) ball in Arizona for a year or two,” he said. “I got ready for that with the heat we had here, prepping me for that.”

But first, McConnell is planning on enjoying every bit of his final high school football experience.

“It’s fun. It’s not like football camp, where you somewhat dread it,” McConnell said. “I’m actually having a lot of fun. I’m meeting new people and making a lot of friends. I’ve met a lot of great people.”

And, of course, there’s one more thing.

“It would be fun to win my last high school game,” McConnell said with a smile.

This year’s Les Schwab Bowl includes many of the top players from around the state, including some underclassmen, as well as a couple of players from southwest Washington. This is the 73rd game in the North-South series, with the series tied 34-34-4.